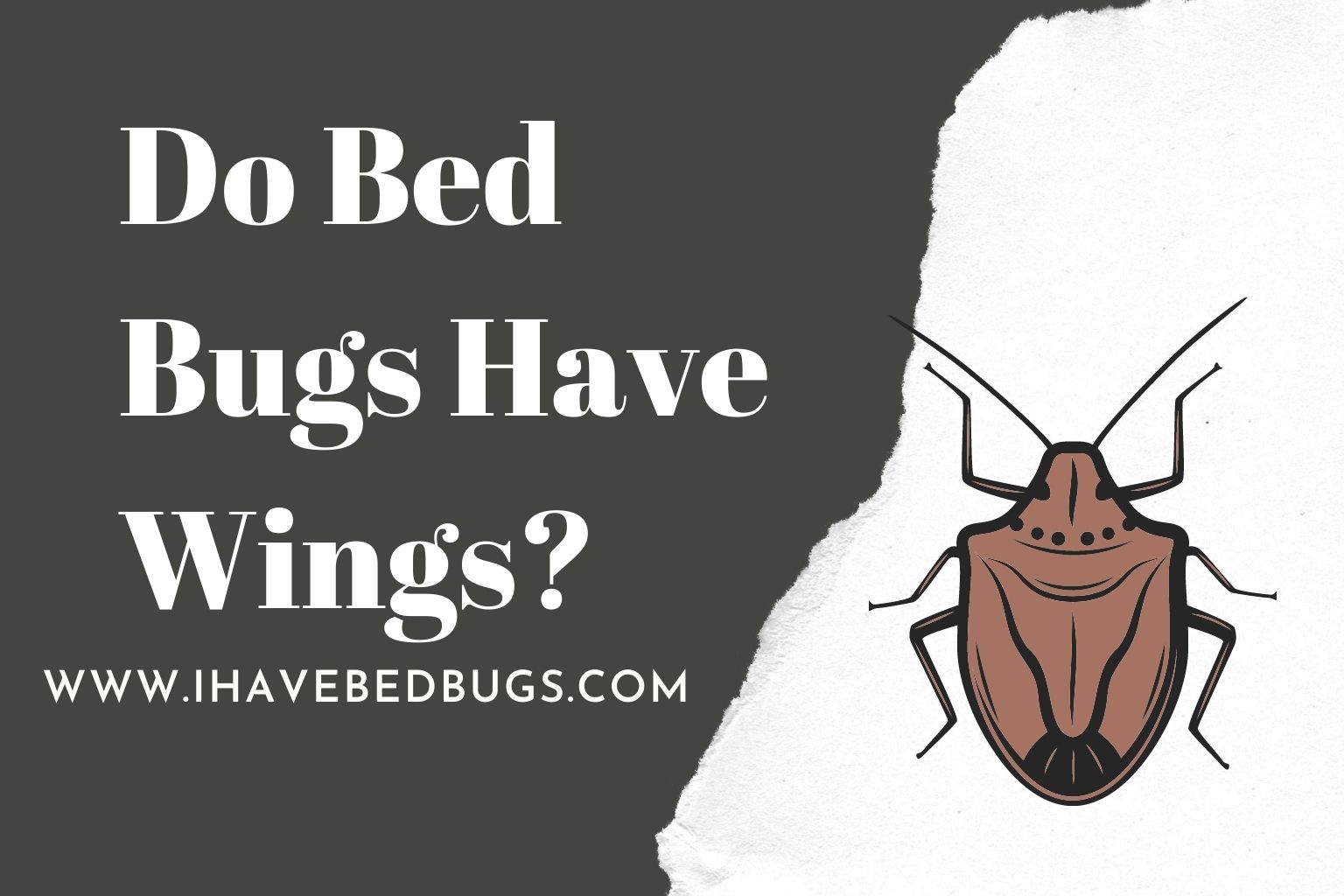 If you’re having allergic reactions or insect bites on your body in the morning, you likely have a bed bug infestation. That’s even more likely if you’ve found tiny black dots crawling around your bed.

Bed bugs are a huge problem, to say the least. These tiny little insects are so hard to find because they like hiding and don’t go out into the open except when they have to. Also, because they’re so tiny, it might be difficult to identify whether the bugs you’ve found on your mattress or near your bed are bed bugs or some other insect.

Moreover, bed bugs tend to spread quickly and move fast and sneakily. So, is that insect you’ve found actually a bed bug or something else? Well, it can be difficult to tell, especially when you don’t know what bed bugs look like and whether they have wings or not. So, keep on reading to learn more.

Bed bugs have relatively small brown bodies around 4 – 5 millimeters; they’re considered tiny compared to other insects. So it might be a little difficult for the naked eye to find bed bugs, but it’s not impossible. Adult bed bugs, specifically, can be seen and found easily in tiny cracks.

Adult bed bugs are reddish-brown in color, and that’s what can help you properly identify them. Their reddish-brown color can stick out and make them noticeable. However, the nymphs are more challenging to find because they’re white and too tiny to be seen.

They also have six thin legs, round heads, and thin antennae. Another noticeable thing about their bodies is that they’re completely flat.

If we have to describe the shape of bed bugs’ bodies, we’d say they’re about the size and shape of an apple seed, but they’re more reddish. However, after feeding, bed bugs swell up to almost three times their size, thanks to the segments in their abdomen that expand and store the blood they’re feeding on.

Bed bugs don’t like to live in open spaces as that makes them easy prey. So instead, they have hiding spots in cracks and crevices in the wall, in the mattress, or around the room, and that’s where they stay until their next meal. After their meal, they retreat to their hiding spots. So, bed bugs won’t live on your skin, but they will live around you. Also, they find their host by following their body heat and carbon dioxide emissions from their breathing.

It’s worth mentioning that bed bug bites aren’t at all dangerous, and they don’t transmit diseases, but they’re truly annoying; we can’t deny that. However, that doesn’t mean that bed bugs aren’t a problem. If you’re suffering from a bed bug infestation, make sure you call professionals to get rid of them as soon as possible. They can spread quickly, and they’re hard to find, so get rid of them before it’s too late.

Even though bed bugs have long legs, they can’t climb smooth surfaces. However, their legs can help them crawl, and they’re pretty fast compared to other pests. They can move at a speed of three to four feet every minute. Additionally, they can grip rough surfaces if they need to climb or feed.

There’s a common misconception that bed bugs only come out at night, and we can see how that misconception started. They prey on unmoving bodies, like a sleeping person, which usually happens during the night when we’re sleeping. So, they don’t come out at night because they want to; it’s because that’s when there’s a sleeping body they can feed on, and they’re hungry.

Do Bed Bugs Have Wings?

The short answer is no, bed bugs don’t have wings, but there’s more that you should know. Bed bugs do have wing pads but no actual developed or functional wings. Their wings don’t develop simply because they don’t need them. There are wing muscles in their thorax, but there are no wings attached.

Bed bugs’ ancestors used to have wings, but they got in the way of the bugs trying to hide in tiny spots, so they kept evolving until their wings stopped forming.

Bed bugs like to hide in small areas, and having wings makes their bodies larger and less flat, so they’re more of a hassle to the pests than an advantage. Keep in mind that the evolution happened thousands of years ago, so there’s no way you’ll find a bed bug that has wings nowadays.

Besides, bed bugs spend most of their lives hiding and only coming out to feed, so they don’t need the wings for quick transportation or to get somewhere difficult. They get anywhere by just crawling, and that’s more than enough for them to survive.

Can Bed Bugs Fly at All?

If you’re wondering whether bed bugs fly or if bed bugs jump, the answer to both questions is “no.” Bed bugs can’t fly or jump. So, if you’re trying to catch some bugs that you’ve found and you found that they’re jumping away from you, they’re most likely not bed bugs. However, we’ll talk about other bug possibilities later on, so stick around for that.

Bed bugs don’t need the ability to fly because they’ve survived long without it, and actually, their wings are more of a disadvantage because they take up space and make their bodies larger. Also, remember that bed bugs like to hide and stay out of sight, so the smaller the bodies, the better. There’s a reason they evolved without the wings all those years ago!

However, that begs the question of how bed bugs get around and how they can get into your house if they can’t just fly in. Well, that’s what we’ll talk about right now.

How Do Bed Bugs Move Around?

So, bed bugs could’ve gotten into your house by hanging on your clothes from a hotel, public transportation, school, and so on. A bed bug infestation can start and spread quickly, so always be careful where you are and where you leave your backpack; a bed bug can crawl into your items sneakily and without anyone noticing.

Now that we’ve established how they might have gotten into your room, how do they move around the house?  They crawl. As we’ve mentioned, bed bugs are quite fast, thanks to their long legs, and they’re excellent hiders, thanks to their shape and flat bodies; they’ll look for cracks and crevices around the room to hide in and stay there until they have to feed.

They’ll usually set camp around your bed so that they can be as close to you as possible. Then, whenever there’s a sleeping body, they’ll start to crawl out of their hiding spacing, onto your mattress, and start feeding.

What Bugs Can Be Mistaken for Bed Bugs?

Are the insects you found around your bed actually bed bugs or other bugs that need a different approach to get rid of? Of course, you can trap one of these insects in a plastic sandwich bag and ask at a local branch of pest control service, and they’ll tell you what it is. However, to make things easier for you, here are the other bugs you can mistake for bed bugs and how to identify them.

If the insect you’re trying to catch keeps jumping away from you, the bugs you have are fleas and not bed bugs. Fleas like to live on pets and feed on their blood and waste.

Fleas have long and flat bodies that are reddish-brown in color. You can tell fleas apart from bed bugs by whether they can jump. Also, you’re more likely to have fleas if you have a pet and let it near your bed or into your bedroom, so keep an eye out for that.

To keep it simple, if your ‘bed bugs’ can fly, they aren’t bed bugs; they’re carpet beetles.

Even though they’re called ‘carpet’ beetles, you might find these bugs around fresh-cut flowers, so think back if you’ve brought any flowers into your bedroom recently.

Bat bugs have a lot more longer hairs around their thorax, and that’s how you can differentiate them from bed bugs. They’re named bat bugs for a reason, and that is they’re typically found in an attic or chimney because they live where bats live. However, bat bugs are left behind when bats leave the area, and they’ll move into your house.

Bat bugs are the closest species to bed bugs, and it makes sense for you to get confused between the two. Take a close look at the bug you’ve caught, and if it has long hairs on its head, you’re having bat bugs, not bed bugs.

Also, bat bugs can’t fly because they don’t have wings, much like bed bugs.

Besides, spider beetles are hairy, unlike the bed bugs species. The biggest tell, however, is that spider beetles don’t bite. So, if you’ve found bites on your body, they can’t be caused by spider beetles, so start looking into other possibilities.

Booklice like high humidity and damp books, to keep it short and sweet. Also, booklice are longer and thinner than bed bugs, so look out for that. Plus, they’re white or light brown in color, unlike the reddish-brown bed bug species.

Some booklice also have the ability to fly. So if you have highly humid areas near your bed, you’re likely to find booklice there.

A swallow bug is quite similar to a bed bug, so it can be a little more tricky to differentiate. However, swallow bugs have a gray-ish antenna, unlike the red-brown one of bed bugs.

Swallow bugs can be a problem because they can live for years without food, and their bites can cause severe reactions. If you have swallow bugs at home, make sure you contact your local branch of pest control service to rid you of these bugs before they become a problem.

Bed bugs have a flat body and a round head, and their overall shape is very similar to an apple seed. A bed bug’s bite isn’t dangerous, but it can be annoying, especially considering that bed bugs are hard to spot.

They’re excellent hiders, and their small bodies allow them to fit into tiny cracks around the house, making it difficult to get rid of them on your own completely.

Bed bugs don’t have wings, but they do have wing pads. Their ancestors used to have wings years and years ago, but they evolved without them, so their bodies can fit into small places.

Besides, bed bugs don’t need the ability to fly or jump. Instead, they crawl around and depend on other forms of transportation, such as hiding in your clothes or bags.

However, not any bug near your bed is a bed bug. Inspect the bite and see when and where it happens, and if possible, try to get a closer look at the bug and see if it’s another species before taking any steps.