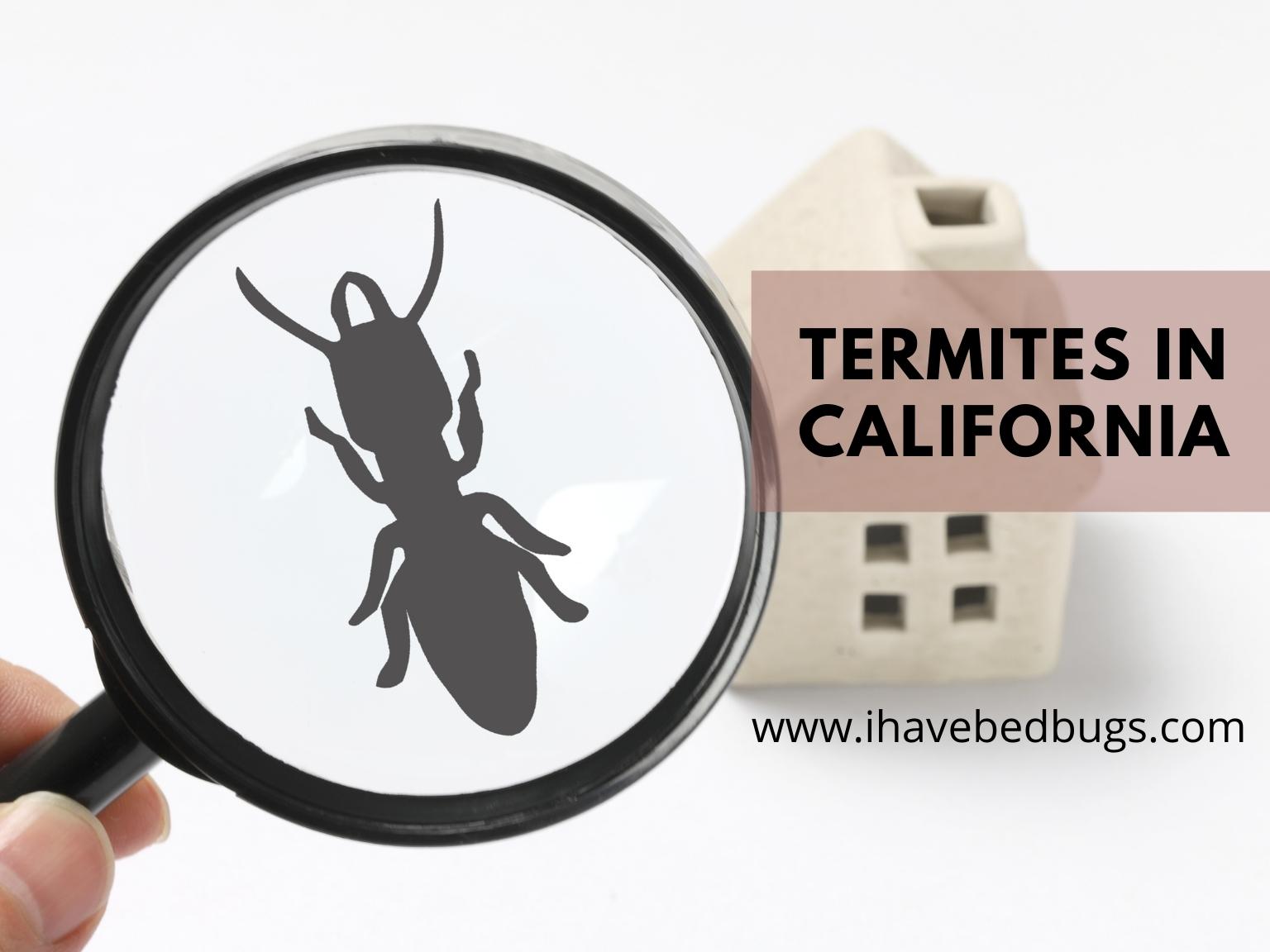 There’s nothing more unnerving than finding termites swarming around in your house and feeding on your wooden structures. However, if you live in California, we can help you. We’ll tell you all about the types of termites in California, how to identify them, and how to prevent them.

For starters, there are three common types of termites that you’ll most probably come across if you live in California: dampwood, subterranean, and drywood termites. So without further ado, let’s jump into more details about those types.

Subterranean termites are the most common in the US, and California is not an exception. You’ll have a higher chance of seeing them around fallen trees and deadwood that’s in contact with the ground. In addition, they like to feed on structural lumber around houses.

Meanwhile, the west Indian subterranean termites like to wreak havoc in Southeastern California. And they’re known to be mercilessly destructive.

As for Formosan, termites can build massive subterranean termite colonies, and they munch through wood faster than the other species. In addition, they prefer wandering around at dusk, and like most insects, they get attracted to bright lights. So you’ll most likely see those Formosan subterranean termites swarming around San Diego.

When it comes to subterranean termites’ appearances, they’re much smaller than drywood and dampwood termites. In addition, the adult reproductives of this type have dark brown bodies with greyish-brown wings on their backs. On the other hand, soldiers don’t have wings. Instead, they have light brown bodies with yellowish-brown heads.

Finally, worker termites have no wings, smaller heads, and smaller bodies than the other types. That said, they have the same body color as soldiers.

If you want to reduce the chances of ever seeing a Formosan subterranean termite or any other type in your house, we’ll tell you what to do. First of all, you should check that your basements, crawl spaces, and attics aren’t highly humid. Termites tend to swarm around places where humidity is available.

Second, never keep any firewood in contact with your house. Instead, put it at least 20-25 feet away. It may be an ideal termites transmitter between the soil and your home. Finally, make sure to frequently clean gutters. This way, you’ll be less likely to have a subterranean termite infestation in your place.

The second most common type of termite in California is drywood. Those sneaky pests like to feed on dry wood, dead trees, fences, furniture, and utility poles. However, you’re most likely to see drywood termites in Southern California, the Central Valley, and coastal regions.

Interestingly, most drywood species don’t make contact with the soil and prefer staying above the ground instead, unlike subterraneans. As a result, drywood termite infestations are relatively easy to detect because they leave unique patterns and tunnels in wood grains, along with oval fecal pellets.

Their fecal pellets are also easily identifiable as they have flat sides. If you ever see those, you should immediately take action and contact pest control so that they can do a professional inspection of your place.

Drywood termites mainly move through infested wood to the neighboring regions. Moreover, they can survive in decaying wood without an issue as they don’t require much humidity to live, hence their name.

Usually, drywood termites swarm and go wild around autumn. For example, you’re most likely to see them during September and October than any other month. Additionally, they build large colonies and prefer swarming at night.

Drywood termites adorn mouthparts that stick out noticeably, tarsal claws, and antennae. In addition, their bodies are larger and more cylindrical than the other types. That said, they move much slower because of their short legs. Interestingly, all drywood termites are blind except the adult reproductives.

The adult reproductives have bodies that can reach up to half an inch in length. Luckily, they’re distinguishable by their black bodies and enormous wings. As for workers, they’re usually only a quarter an inch in length with greyish-brown bodies. Finally, soldier termites have orange-tinted heads.

To avoid seeing drywood termites around your property, you should first seal any cracks or crevices you see in your foundation. Moreover, avoid storing firewood near your house because termites like to travel through it. Also, it’d be best if you used chemically treated or pressure-treated wood.

Finally, to get rid of particular pests, you should inject your wood with insecticides to ensure they don’t multiply further.

The last type we’ll talk about is the dampwood termites. As per their name, those pests like to live in highly moist places. As a result, you’re more likely to see them in coastal areas. Dampwood termite infestations can occur in decayed wood. However, the wood must remain in contact with any water leak or soil in order to stay moist.

Dampowood termites feed on wood by creating massive galleries where they survive easily. Often, their presence in wood indicates an issue with moisture or decaying. More specifically, Pacific dampwood termites are the most common species that live in California. For example, they commonly infest wood in humid places, like soft springwood.

The Pacific dampwood termite thrives during early fall and the final weeks of summer. Therefore, you have a high chance of seeing it during those periods in humid areas.

There are a few points you should know to be able to identify a Pacific dampwood termite. First of all, those termites are one of the largest and most destructive species living in the US. Second, like most termites, you can identify three types of this species. The adult reproductives have brownish-yellow bodies that are adorned by wings. Moreover, they’re often one inch in length.

Going on to the soldiers, they can be distinguished from the other types by their large protruding black jaws and flattened heads. They’re also dark brown rather than black. Finally, the worker caste, whose members are all in the nymphal stage, have light-colored bodies.

The easiest way to prevent Pacific dampwood termites in your house is to avoid moisture damage as efficiently as you can. For example, you should have frequent checkups of your irrigation system and pipes. Moreover, it’d help if you never left your water system damaged without fixing it.

Typically, you should also routinely remove firewood and tree stumps around your house. This is because they’re a significant contributor to most termite infestations, and the same goes for soil piles because, usually, termites swarm among them.

What Are the Signs Of Termites In Your Home?

A termite infestation typically has many distinctive signs. Accordingly, you can run a termite inspection to detect infestations early. We’ll tell you five infestation signs that you should look for before contacting pest control.

Mud tubes are one of the unique creations of termites. They form narrow tubes in places where food is widely available, for example, trees. However, in the case of Formosan subterranean termites, you’ll find those tubes near ground level in your house structure. The reason that they build those tunnels or tubes is to maintain optimum levels of moisture and temperature.

If you see any mud tubes in wood structures around your house, you may have a termite colony nearby.

As widely known, most termite species feed on the cellulose found in wood. Accordingly, they munch on wooden floors, walls, furniture, and more. Over time, their feeding habits cause the wood to weaken and go hollow.

As a result, if you notice any wood damage around your house or wood with holes resembling a honeycomb, you should contact a pest control company to inspect the infested wood and get rid of termite colonies. This way, you’ll lessen termite damage in your house.

After termites swarm and get ready to form a new colony, they get rid of their wings. Consequently, they leave discarded and shed wings behind them near doors, windows, or any entry points in your place. So to detect a termite infestation, you should check for tiny discarded wings.

However, make sure they don’t belong to harmless ants. Generally, ants have two pairs of wings, front and rear.

Most species, like drywood termites, live mainly in wood. To feed freely, they form extensive galleries. Then, they create tiny holes in them to get rid of their fecal pellets and keep their living places clean. Typically, termites’ fecal pellets are made of wood and have tiny sizes. The good news is that you can easily detect them on your floors and walls because they look like coffee grounds.

Many types of termites, especially subterranean termites, cause damage to wooden floors. If this is the case in your house, you’ll see tiny blisters in your flooring. Those indicate that the sneaky pests have been feeding for a while.

There are three types of California termites that you can come across: subterranean termites, drywood termites, and dampwood termites. While they resemble each other considerably, they mostly live in different areas. However, unfortunately, they all wreak havoc on wooden structures.

Accordingly, you should look for any signs of infestations around your house and contact pest control companies when needed.