If you’ve ever dealt with any flea infestation, you probably know how it can be an itchy nuisance when it gets out of control. What’s even worse is when your treatment methods aren’t working, and fleas keep on showing up.

This is definitely an issue that can make you run in circles trying to figure out the next best elimination step, right? But don’t worry – all types of fleas can be easily eliminated if you can identify them!

In this complete guide, we’ll go through all types of fleas and give you tips on how to pinpoint what you’re dealing with, so read on!

One of the most common flea species is the cat flea (Ctenocephalides Felis). Despite being found in the northern regions of the U.S., cat fleas can still be found anywhere around the world as long as there are cats around.

Cat fleas are very small (about 1-3 mm in size), and they have a distinct brownish color that most flea species are notorious for. They’re also wingless insects, but they make up for that with hind legs that help them jump impressive distances for their small size. 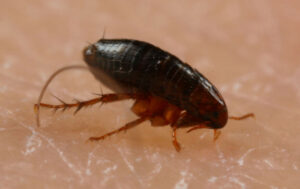 Cat fleas are known for some patterns. For one, they tend to live in a cat basket of the host they’re feeding on, carpets, or any animal’s fur, which is why some people might mistake them for dog fleas. Cat fleas can also affect humans, which will have some folks mistake them for human fleas.

The cat flea type is pretty weak to most flea control methods, but it also has a fast reproductive rate (as fast as one egg every hour). Eggs fall out from domestic animals furs and into furniture, carpets, and similar surfaces, after which the eggs hatch into larvae.

Cat and dog fleas are similar in that they aren’t very picky when finding a host. As long as they’re getting regular blood meals from dogs, cats, foxes, rabbits, rats, or even humans, fleas will continue to live and won’t act differently from cat flea or other common flea species.

The dog flea (Ctenocephalides Canis) type has almost all characteristics of a cat flea, but you can discern the differences just by looking at them. For example, dog fleas have a rounder head shape than cat fleas and more teeth on their hind legs.

As one might expect, a dog flea can live in dogs’ furs or other furry wild animals. But, unfortunately, it also prefers to spend its breeding cycle there as well.

Adult dog fleas feed off their host to get their regular blood meals. At the same time, female fleas will be laying eggs in hundreds – ones that are quite similar to cat flea eggs in shape and consistency, so fleas can easily distribute them throughout the house.

Note that dog flea might cause dog tapeworm to appear in your pet’s excrement. Moreover, adult fleas have long legs, enabling them to jump up to 6 inches, so they can infest garden lawns, move from host to host, and so on.

As the name suggests, human fleas live by sucking blood from a human host, and they’re very similar in appearance to cat fleas. Unfortunately, they also infest larger carnivore animals, so you might find them in the fur of your pets. 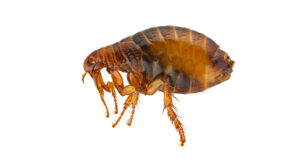 They look exactly like cat and dog fleas in body anatomy and color, but they can grow up to 4mm long.

While the adult fleas of this type are similar to cat and dog fleas, they live in entirely different locations, such as stables and barns, as the manure helps human flea eggs to stay warm and moist.

These fleas go through the same four stages. However, these stages combined vary in length, meaning that they can live up to two years to finish a cycle. Also, human flea eggs take about 4-6 days to hatch. Note that a female flea can lay up to 400 eggs throughout one year.

The Chigoe fleas, also known as Tunga Penetrans, aren’t your typical flea species. Like most types on this list, they occasionally bite humans, but they’re also known for piercing skin to obtain potential blood meals.

They have a brownish color and are very small (1 mm in size), making them the smallest flea species known.

This species usually sticks to tropical and subtropical climates. Their cycle is identical to other fleas’ life cycles, with just one unique exception: the adult female fleas pierce the epidermis to get human blood. As long as it gets blood and remains inside the skin, the female flea will expel over 100 eggs just in two weeks.

As eggs fall to the ground, they’ll enter their natural life cycle and develop into adult fleas to look for a host animal.

Sticktight fleas (also referred to as bird fleas) pierce the skin of the chicken head in a similar fashion to chigoe fleas. Although they’re more on the uncommon end of the spectrum, you’ll find them often infesting other animals, such as foxes, squirrels, cats, and dogs. 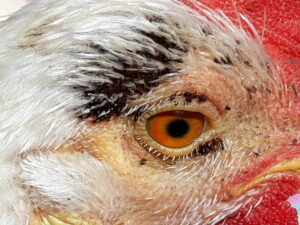 As you may have guessed, sticktight fleas are found in poultry systems and can be quite lethal to your poultry if you don’t inspect your chicken and deal with them right away.

Do you often find squirrels sneaking into your backyard? If so, be careful as they might bring ground squirrel fleas into your property. This species of fleas mostly infest squirrels, but they might also infest other rodents and houses if they sense human movement.

Squirrel flea looks like common flea types, but they prefer other wild animals; thus, you’ll mostly find them in these animals’ usual resting place on your property, so this is where you should start your search.

Cycle Duration: 2 and half weeks.

Known for being one of the most resilient fleas out there, oriental rat fleas are very hard to eliminate. On the plus side, though, they don’t typically infest pets or houses and are usually found in yards.

Like most common pests that infest outdoor properties, these fleas are carried by rats, mice, rabbits, and other rodents. On occasion, oriental rat fleas can bite humans through infested rats, so if you have a pet rat in the house, you might want to check up on it.

Cycle Duration: Up to 6 weeks.

Northern rat fleas are quite similar to the previous species of fleas, as they infest rats and wild rodents to have their regular blood meals.

They’ll infest the fur of your pet mice and your yard, but they won’t stay indoors. So how can you tell them apart? Unfortunately, there’s no way of knowing without a microscope. They’re also more distributed through the U.S. than their Oriental counterpart.

Cycle Duration: Up to 6 weeks.

Rabbit fleas infest a rabbit’s fur in no time. However, this type of fleas is more common in Europe’s wildlife, so they usually infest wild rabbit furs. Therefore, if you have a pet rabbit, they might be infested with another type like the ones mentioned here in this list. 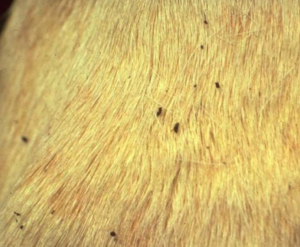 The rabbit flea, or Silopsyllus cuniculi, could be found in clusters around a wild rabbit’s ear, especially a female rabbit in late pregnancy. Moreover, a female rabbit’s reproductive hormones affect rabbit these fleas’ survival.

Cycle Duration: Depends on the reproductive state of the host.

Don’t let their name deceive you because sand fleas aren’t fleas. In fact, they’re not even insects at all. Instead, they’re crustaceans, and they hop around on beaches in a similar fashion to that of common flea species. Also, note that they don’t bite or require blood meals.

Sand flea usually prefers its sandy habitat to urban houses, so there’s no need to worry about a sand flea infestation.

This is yet another flea type that isn’t actually flea species. Springtails, snow fleas, or springtail fleas are small, black insects that multiply in large numbers and become active during winter. 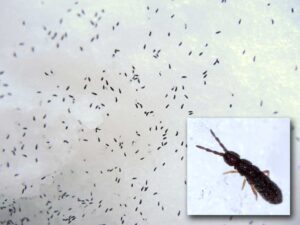 The Springtail flea type doesn’t bite either humans or pets, so these are perfectly harmless. Actually, they can be a great part of the ecosystem if you can put up with them since they feed off fungi and decaying organic substances.

If you live near high-resting hen houses and often get nibbed in your arms and legs, you might have a bird flea problem on your hands.

Unlike sticktight flea, bird flea takes to high-resting retreats and brooder spaces; they don’t stick to chicken’s heads but jump every which way like most types of fleas on this list.

The adult bird fleas normally flourish in humid environments, and they infest pigeons, poultry, sparrows, and starlings. They can also move from bird nests and hen houses to your home, searching for a blood meal.

Now that you know the different types of fleas that can infest your property, this can help you plan an elimination method that’ll work.

Make sure not to mix up flea types such as sticktight and bird fleas. In addition, you should consider their life cycle to eliminate them once the eggs develop into fully adult fleas.