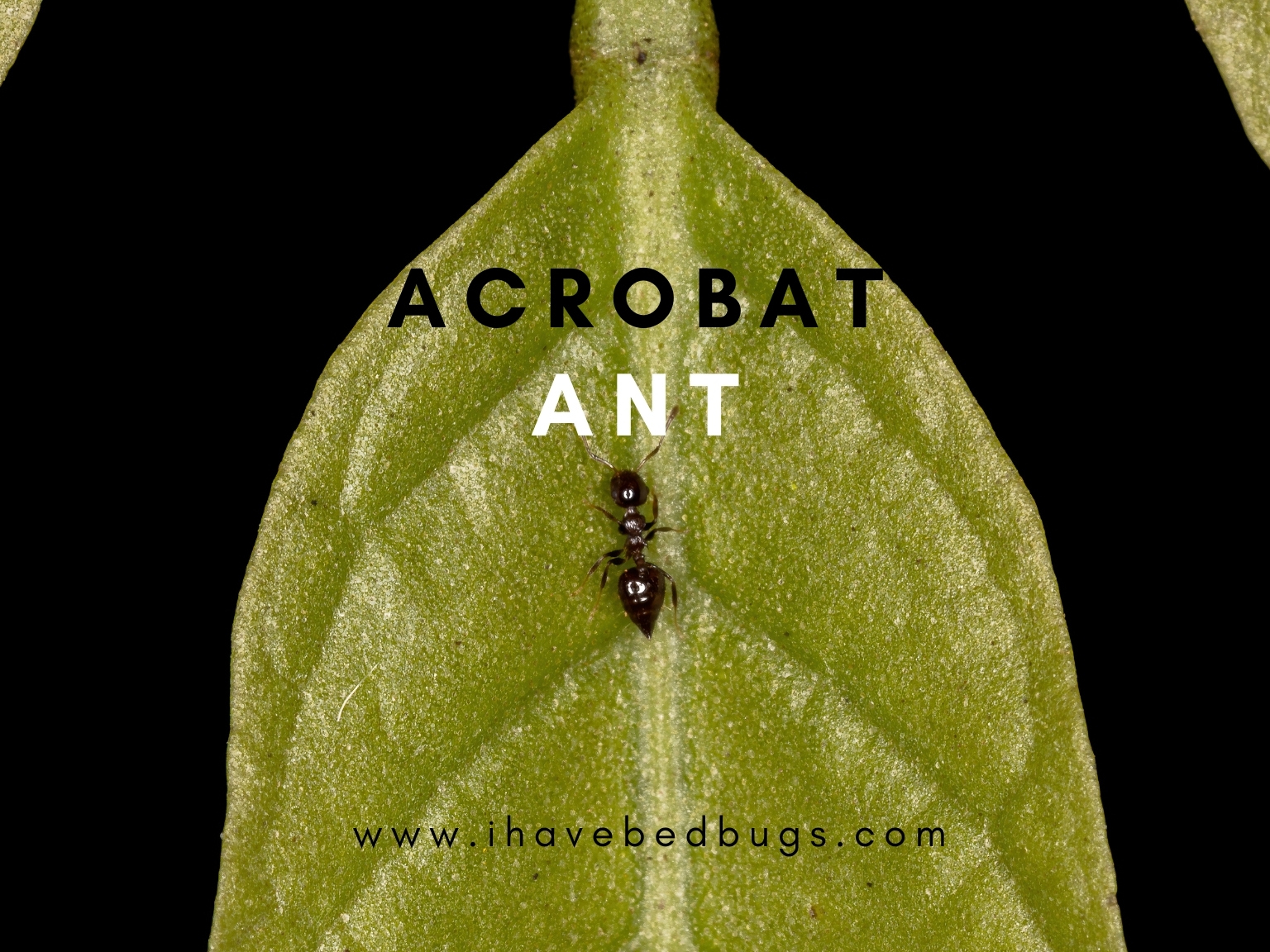 Have you ever seen an ant practicing gymnastics before? This unique ability gained acrobat ants their name. They raise their abdomens over their heads as a defense mechanism, like scorpions, if something disturbs them. Since acrobat ants are widely spread throughout the United States, you have a high chance of encountering them if you live there.

So if you’re worried about an infestation and want to know how to detect it, we’re here to help. Read on to know everything about acrobat ants’ appearance, diet, habitat, and more.

To identify an acrobat ant, you need to learn more about its characteristics. So let’s have a look at them.

Acrobat ants (Crematogaster spp.) are pretty small with light brown and black bodies. However, like many other ant types, their queens are slightly larger with 3/8 inch bodies, while the workers are 1/8 inches long. Generally, you’re more likely to see worker ants trailing and looking for food inside your house. Meanwhile, the queen mostly stays in the nest.

If you look at this ant from above, you’ll see a heart-shaped abdomen with a pointed end and an uneven thorax. It also has a stinger and an antenna that has 11 segments and ends with a three-segmented club.

Acrobat ants build nests in moist areas outdoors, such as inside rotting logs, stumps, and under rocks and woodpiles. Although they can’t chew through sound wood, they can clean the galleries that other types of ants created of wood shavings and dirt.

As a result, they often live inside wood that has been damaged by wood-eating insects, like carpenter ants or termites. Acrobat ants can also live in nests that carpenter ants abandoned.

This is why people confuse them with carpenter ants. However, carpenter ants are known to damage structures, while acrobat ants are harmless. In addition, acrobats are a little smaller.

Also, because acrobat ants tend to clean galleries of other insects, homeowners can mistake an acrobat ant infestation for an active termite infestation because of the wood scraps left behind.

Moreover, acrobat ants usually invade houses through window frames, construction gaps, and door thresholds. Workers ants can also enter through tree shrubs that are in contact with the building or through trailing on utility lines. Once they’re inside your house, they might nest in damp areas, like around pipes.

Acrobat ants are pretty aggressive. They can hunt many different insects and feed on them, like termites, wasps, and caterpillars, to name a few. Their defense mechanism consists of spewing immobilizing venom that has an unpleasant odor. Then, when their attacker is down, they’ll carry it into their nest so that the larvae can feed on the dead body.

However, they protect aphids from outside dangers and predators because aphids provide them with their beloved food, honeydew.

When it comes to humans, acrobat ants are mostly harmless. They can bite and sting, but only when someone disturbs them. That said, they pose a considerable risk to houses and properties because they can chew wire insulations to build nests there. This often results in short-circuits inside buildings. But to put you at ease, they don’t damage woods as other ant types do.

Generally, acrobat ants are omnivores and can feed on various types of food. They can even feed on both live and dead insects. However, like most ant types, they prefer sugar and sweet foods. They also have a preference for foods high in protein, like meat.

Their primary diet consists of honeydew, a sugary waste excreted by aphids and sap-feeding insects. They often keep aphids inside their colonies to maintain an unlimited food source.

In an acrobat ants’ nest, there’s usually only one queen. The queen’s main role is to produce winged males and females to mate, and they often go by the name swarmers. Their mating season begins in summer when adult acrobat ants leave their nest to swarm. After mating, the males don’t live long, while the females shed their wings and go to form their own colonies.

The new queens often form those colonies inside tree branches and start laying eggs shortly after. When those eggs mature into acrobat ant workers, they start foraging and taking care of other eggs. As long as the queen is alive, this cycle will go on, and the population will grow further.

Some queens might choose to build an acrobat ants’ nest inside a building rather than outside. However, for that to happen, they must find wood that has been formerly damaged by fungus or moisture.

Signs Of An Acrobat Ant Infestation

Another sign you should look for is wood debris around window frames, wall voids, and any damp areas in your house.

Although those ants prefer living outside, you might find some acrobat ant nests inside your house if you have water-damaged wood.

How To Prevent An Acrobat Ant Infestation

You need to carry out some preventative methods to avoid getting acrobat ants in your place. To begin with, you should regularly trim the tree limbs and shrubs in your backyard so that they aren’t in contact with your house. Also, it’d be best if you stored firewood piles away from your home. Ideally, you should leave at least 20 feet of space between them.

Moreover, you should seal all the crevices and cracks in the walls inside your house, as those are perfect entry points for ants.

Most importantly, it’d help if you looked for openings around your utility lines. However, we don’t recommend that you deal with them yourself. Instead, you should contact an electrician. Finally, try to check for areas that have been damaged by water in your house. If you find any, treat them right away.

How To Get Rid Of Acrobat Ants

If you detect signs of an infestation around your place, the best option is to contact a professional pest control company. They’ll carry out a full inspection of your house, including exteriors and interiors. Once they identify the ant species, they’ll take the necessary measures to control acrobat ants.

However, we’ll still tell you a few methods that you can try to get rid of acrobat ants.

The best control method for indoor acrobat ants is finding the nest and directly destroying it. However, locating it is a bit of a challenge. You can first look at areas where moisture is widely available, for example, leaky pipes. While you’re there, you should look for termite or carpenter ant nests too.

If you succeed and find the acrobat ant nest, you can directly treat it with an aerosol or a foam pesticide. You can also use pesticide dust as it stays longer in wall voids; therefore, it prevents acrobat ants from returning.

If you don’t find the nest, you can apply non-repellent pesticide on the acrobat ants crawling around your place. While this will decrease the population, it definitely won’t destroy the colony. So you’ll still need help to locate the nest.

As an alternative, you can try bait stations to treat acrobat ants. For those to work, the trailing ants inside your house should pick up the poisoned bait and take it back to their nesting site. Typically, all the other insects inside the nest will feed on the bait. This will successfully eliminate the entire population or at least affect it significantly.

However, you should know that this method works best with other ant species since acrobat ants might ignore your bait and feed on other insects instead.

Like most ant species, acrobat ants like living inside decaying wood. So they might infest old tree branches and firewood in your backyard. If you watch the ant trails closely, they might lead you to their outdoor nest. The right way to treat acrobat ant colonies is using a foam or a liquid pesticide. You can directly inject it into the infested soil or wood.

Another pest control method you can try is performing a perimeter spray. This will successfully keep acrobat ants outside your place. But to do that, you’ll need to spray the insecticide up to three feet away from the ground. This way, if an ant tries to enter your place, it’ll immediately be killed. Again, however, this method is preferred to be carried out by a professional pest control company.

If you live in the United States, you’ve probably encountered acrobat ants before. They can be easily distinguished by their heart-shaped abdomens and the unusual ability to raise their bodies over their heads. If you suspect you have an infestation in your house, you should contact pest control or look for the nest and treat it with pesticides.