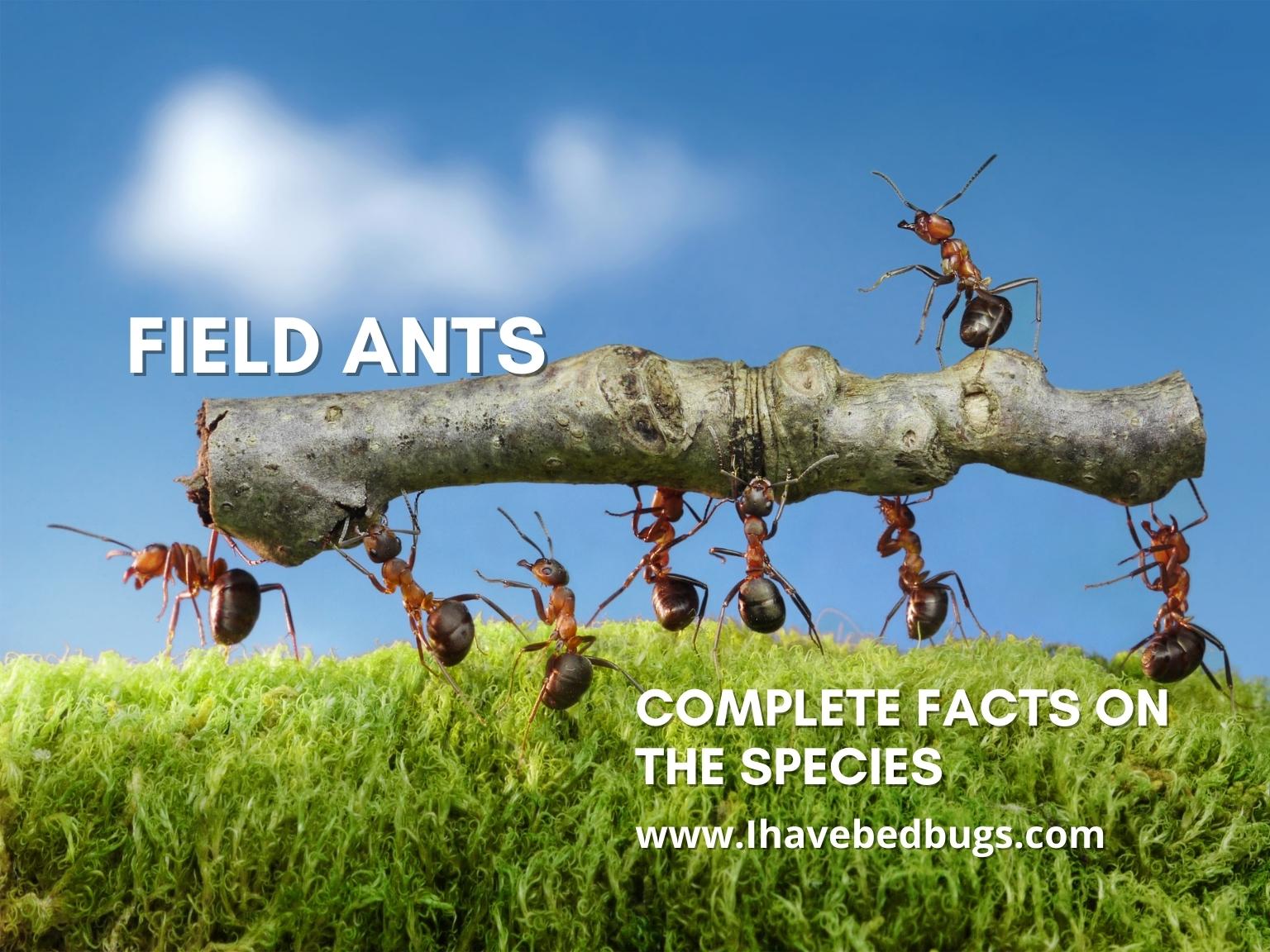 Named after their famous love for building outdoor nests, field ants (Formica spp.) can build distinct mounds nearly anywhere in your garden or lawn. Although they don’t pose a risk to human health, they’re a nuisance for homeowners because of their effects on grass. For example, their mounds often render your lawn bumpy and affect grass growth.

So if you want to learn more about field ants and how to get rid of them, read on.

Field ants are tiny with bodies that range from 1/8 to 3/8 inches and have six legs. They can have many colors, including red, brown, yellow, and black combinations. You can quickly identify a field ant by its rounded thorax and the node that separates it from the abdomen.

People often confuse larger field ants with carpenter ants because of their significant resemblance; however, if you look at the ant’s thorax, you’ll know which one it is. Carpenter ants have one curve on their thoraxes, while field ants have two distinct curves.

Field ants have three white dots between their eyes that you can easily distinguish them with. As for antennae, they have two long segmented ones.

Unlike other insects, field ants leave large mounds behind them in outdoor areas. They usually form those mounds with leaves, grass, pine needles, twigs, and other plant materials. The perfect nesting place for those ants would be around fences, shrubs, or small trees, where they can live comfortably for decades and feed without an issue.

Field ants build mounds by excavating underground after finding a place to live in. Unfortunately, upon seeing their vast mounds, some people confuse them with fire ants.

Like the California red ant and the brownfield ant, some field ants prefer nesting in sidewalks’ cracks and foundation walls. But, lucky for you, those ants don’t nest inside houses at all. Instead, they merely enter to look for food and form mating swarms.

The field ant genus includes many different species, but they all resemble each other in having one queen responsible for producing eggs. Those eggs later grow into worker ants, which are responsible for many roles inside the colony. Otherwise, the colonies consist also of soldier ants that protect the colony against intruders.

Field ants prefer sugary foods as their main diet consists of honeydew, a sweet substance that aphids and scale insects produce. That’s why some field ant species, like the silky ants, keep a group of aphids in their colonies so they can have an unlimited supply of aphid honeydew. Those sneaky pests can feed on dead insects and seed husks instead when honeydew isn’t available.

Some field ants are called scavengers and prefer eating meats, and they become a headache to deal with in their swarming season. This season lasts from the last few weeks of summer to fall, and their winged ants start swarming frantically out of the colonies, searching for food.

Since field ants frequently nest on private lawns and around households, they expect disruption every once in a while. For that, they have a defense mechanism that consists of using their mouthparts to bite humans. In addition, some field ants bite and spray formic acid simultaneously, inducing a stinging sensation in their poor victim.

The bite symptoms are mild and often subside after a short time. Some people don’t even experience them. However, if you have allergies or sensitive skin, you should contact a medical care professional if an ant bites you.

As a rule of thumb, most ant infestations can be detected through the activity of their workers. This is because worker ants often appear the most as they swarm, forage for food, and move in distinctive trails.

You might also detect an infestation by seeing a noticeable mound among your grass. Those mounds are often the openings to field ant nests, and you’ll most probably see them around shrubs, trees, or fences.

Since not all field ant species nest inside houses, if you see a few of them wandering in your kitchen, it’s an obvious sign that you have an infestation nearby.

How To Get Rid Of Field Ants?

You should know what to do in case you detect an infestation near your place. However, we recommend you contact a pest control professional instead because they’ll know how to control field ants efficiently. Here are the methods that you can try out for yourself:

To get rid of an entire colony, you should make it your aim to kill the queen ant. As long as the queen is alive, it produces eggs and strengthens the ant colony further. Pesticides are guaranteed to do that and reach deep where the queen nests, which is often about three feet below the ground. To ensure that the pesticide gets this area, you should increase the water when preparing the mixed ratio.

Many liquid insecticides can efficiently get rid of field ants. For example, you can use bifenthrin, carbaryl, cyfluthrin, or permethrin, with carbaryl being the most toxic out of the group. The rest are relatively safe, but beware if you have streams or ponds around your house because they can poison aquatic life.

Ideally, it’d be best if you waited a couple of days after pouring your pesticide down the field ant mounds, as some workers may be out looking for food when you do it.

If you’re against using chemicals, you can use insecticidal soap instead of liquid insecticide. However, soap will only disrupt the ants, leading them to move away, and it won’t kill them. Ironically enough, they might move away just a few meters and build new nests there.

How To Prevent Field Ants?

If you want to prevent a pest problem before it occurs, you should inspect your house every once in a while. The prevention precautions you should take are storing firewood piles away from home, removing mulch regularly from your foundation as this will discourage ants from living in this area, and closing your exterior doors tightly.

Many species of field ants don’t prefer living under shade, so if you provide your lawn with plenty of that, you might succeed in keeping them away. You can do that by mowing your grass to a relatively high length.

Another method you can try is eliminating aphids and plant-sucking insects as they secrete honeydew and attract field ants. Finally, although you’ll never get a field ant infestation inside your house, you should still seal cracks and crevices in your walls and window frames.

Field ants are among the most annoying pests. They build large colonies that can live for decades because of their nesting habits.