Home » Cockroaches » Australian Cockroach: Everything You Need to Know! 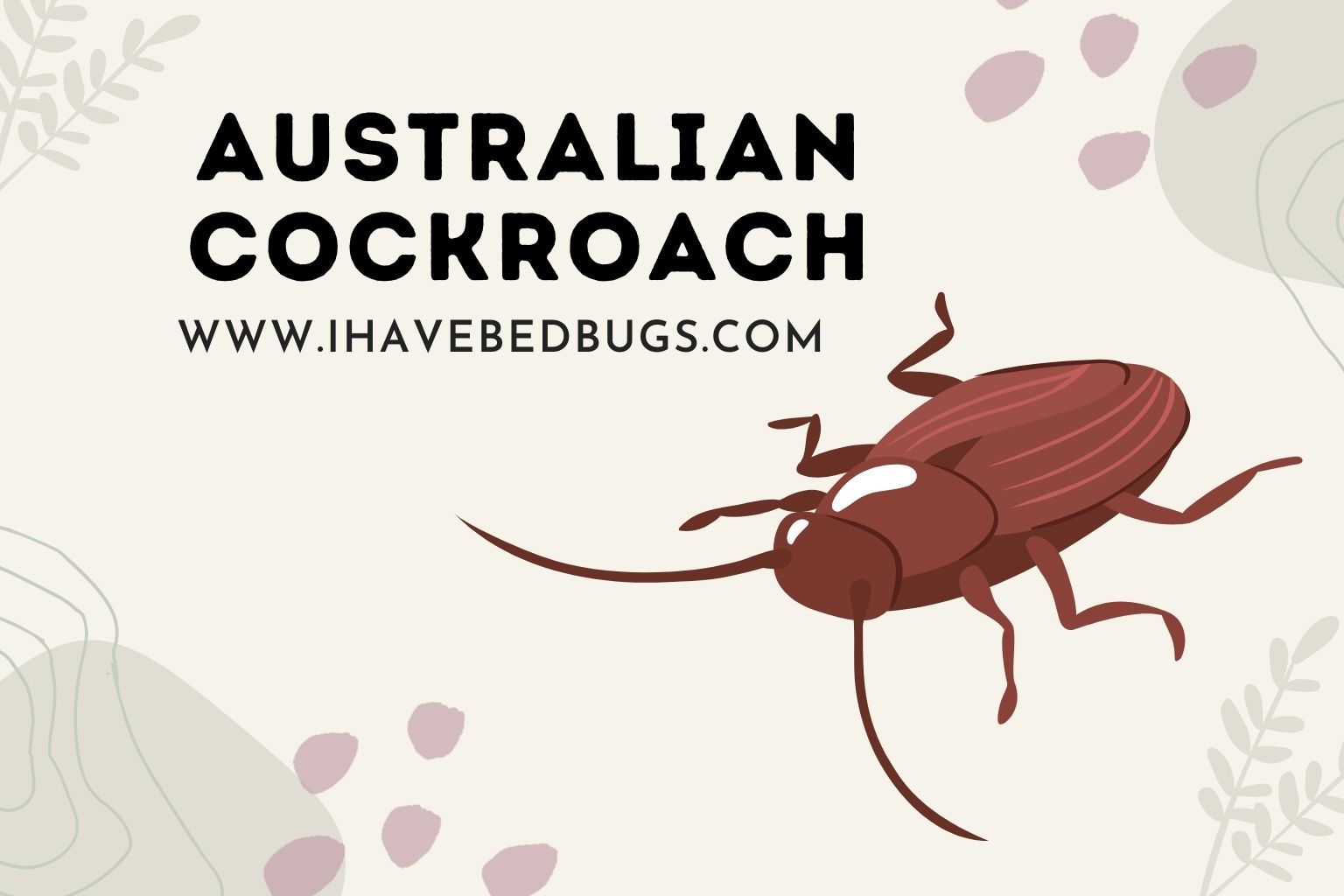 If you see a cockroach at your house and you’re unsure whether it’s an Australian cockroach or not, here’s everything you need to know about these cockroaches.

Where Do Australian Cockroaches Live?

Despite the name, Australian cockroach populations are spread worldwide, especially in the southern United States, but there are plenty of them in Australia anyway.

You’ll mainly find Australian cockroaches outdoors because they enjoy tropical environments and greenery. However, they’ll constantly be circling your property and come out of hiding at night.

The Australian cockroach ranges from reddish-brown to dark brown with light yellow markings on the upper parts of the forewings and around the head.

How Long Does It Take For The Egg Of Australian Cockroaches To Hatch?

How Long Do Australian Cockroaches Live For?

After taking up to 40 days to hatch, the nymphal stage of Australian cockroaches takes anywhere between 6 to 12 months. Then, the adult lifespan lasts for four to six months.

Australian roaches are not considered serious pests, according to the Australian Museum. Does that mean that the Australian cockroach should be welcome in your house? Absolutely not; it shouldn’t.

They still have the potential of carrying harmful pathogens, such as Salmonella and E.coli, which may cause food poisoning. Moreover, these pests can produce allergens, causing allergic reactions, such as sneezing, coughing, and skin irritation. Also, the roaches’ droppings and molted skins are bound to be unpleasant at best.

Furthermore, the Australian roach can eat your plants, foods, wallpaper, books, and so much more, which is irritating, even if it doesn’t physically harm you in a direct way.

How to Prevent an Australian Cockroach Infestation?

History of the Cockroach: The Complete Guide!
Cockroach Eggs: The Facts by Species!
Oriental Cockroaches: Everything You Need to Know!

What Kind Of Cockroaches Are In Australia?

In Australia, there are several cockroach species besides the Australian cockroach. Here are the most common species you’ll probably run into and what you need to learn about them. 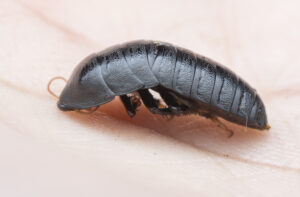 The oriental cockroach, also known as water bug, ranges from dark brown to black with a greasy sheen and is average-sized, ranging from 20 to 25 mm in length.

Female oriental cockroaches carry up to 16 eggs in each egg case for a day before they glue it to a surface. The eggs hatch in about two months, and the nymphs grow to adults in about 18 months.

When looking for the oriental cockroach, think of places with high humidity and cool temperatures such as damp basements, leaky pipes, crawl spaces, and drains. It also loves to munch on decaying organic matter, books, leaf litters, and anything starchy.

German cockroaches can be spotted by their amber color marked by two dark brown longitudinal stripes along their pronotum. The wings of the Blatella germanica go beyond its abdomen. However, you won’t see it using it much because it prefers to run instead, which makes everyone breathe a sigh of relief.

Fortunately, German cockroaches aren’t as large as other cockroaches, as adults only grow 12 to 15 mm long. That being said, the fact that they’re on the smaller side combined with their high speed can make them more challenging to detect.

One thing that German cockroaches love to do is breed, as they generate three to four generations per year. The female carries up to 40 eggs in an egg case, which hatch in one month. The development until the adult stage takes 40 days only. So, a cockroach infestation from these species isn’t a joke.

If you’re looking for German cockroaches, they’re found indoors. They need wet, humid, and warm conditions, so they’re commonly found in bathrooms and kitchens. During the day, they’re likely to be hiding in cracks and crevices. You’ll probably find these food scavengers close to your food supply, such as kitchen cabinets.

The most common signs of a German cockroach infestation are egg capsules, pepper-like droppings, and a musty odor. 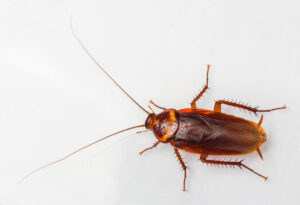 American roaches are one of the most common domestic and commercial pests worldwide. But, more importantly, you’ll recognize them immediately because they’re pretty large roaches. They’re the most significant species we’ve discussed, as they grow up to 40 mm long, making them one of the largest home-invading cockroach species.

American roaches love to feast on decaying organic matter but don’t mind dirty clothes and books. They seem to have a preference for fermented drinks, as well.

The name is self-explanatory, even if you haven’t heard of these species before. They have a pale glossy brown color and two light bands across their wings and abdomen. Also, they’re small, ranging in length between 10 to 15 mm.

You can identify them with their transparent wings, which hardly reach halfway down their abdomen in females. The egg cases of the female can contain up to 18 eggs. Nymphs take only two to four months to become adults.

Also called the “furniture cockroach,” they’re completely domestic, meaning that they live their whole lives indoors, which makes them an invasive species. As they love warmth and humidity, heated buildings seem to be at a higher risk of an infestation.

You’re guaranteed to find them feasting on starchy materials, including wallpaper paste and books.

The Brown-Banded cockroach likes hiding and feeding. So, you’ll find it behind wall decorations, under upholstered furniture, inside paper piles, near closets, and inside kitchen pantries. When tracking the infestation, look for cast skin, fecal smears, egg cases glued to random surfaces, and droppings.

It’s all in the name; this cockroach is smoky brown. In fact, if cockroaches weren’t so gross, you’d probably be mesmerized by its shine. In terms of length, the Periplaneta fuliginosa ranges from 25 to 38 mm, making it one of the most significant pests you can encounter.

In addition, the Smoky Brown cockroach is fully winged. The male has wings that extend beyond its body while barely reaching the abdomen in the female. This species mainly run, but it can also fly in hot conditions.

The female Smoky Brown cockroach carries egg cases with up to 26 eggs, and the nymph takes up to a year to become an adult.

These nocturnal roaches hide in cracks and crevices. Being outdoorsy, they mostly live under bark and inside tree hollows. They prefer to eat plant-based food but have no problem invading your home and settling in your roof voids, mulched areas, and so on.

By learning all about the Australian cockroaches and other different species of cockroaches, you know what you’re looking for, along with the when and where to look for it. Plus, you have a better understanding of the harm that these cockroaches can cause. Additionally, you’re learning how to reduce the risk of a future infestation by understanding what attracts them in the first place.

No matter how different cockroach species are, they’re unwelcomed, and you need to get rid of them.

History of the Cockroach: The Complete Guide!
Cockroach Eggs: The Facts by Species!
Oriental Cockroaches: Everything You Need to Know!