Home » Cockroaches » American Cockroaches: Everything You Need to Know! 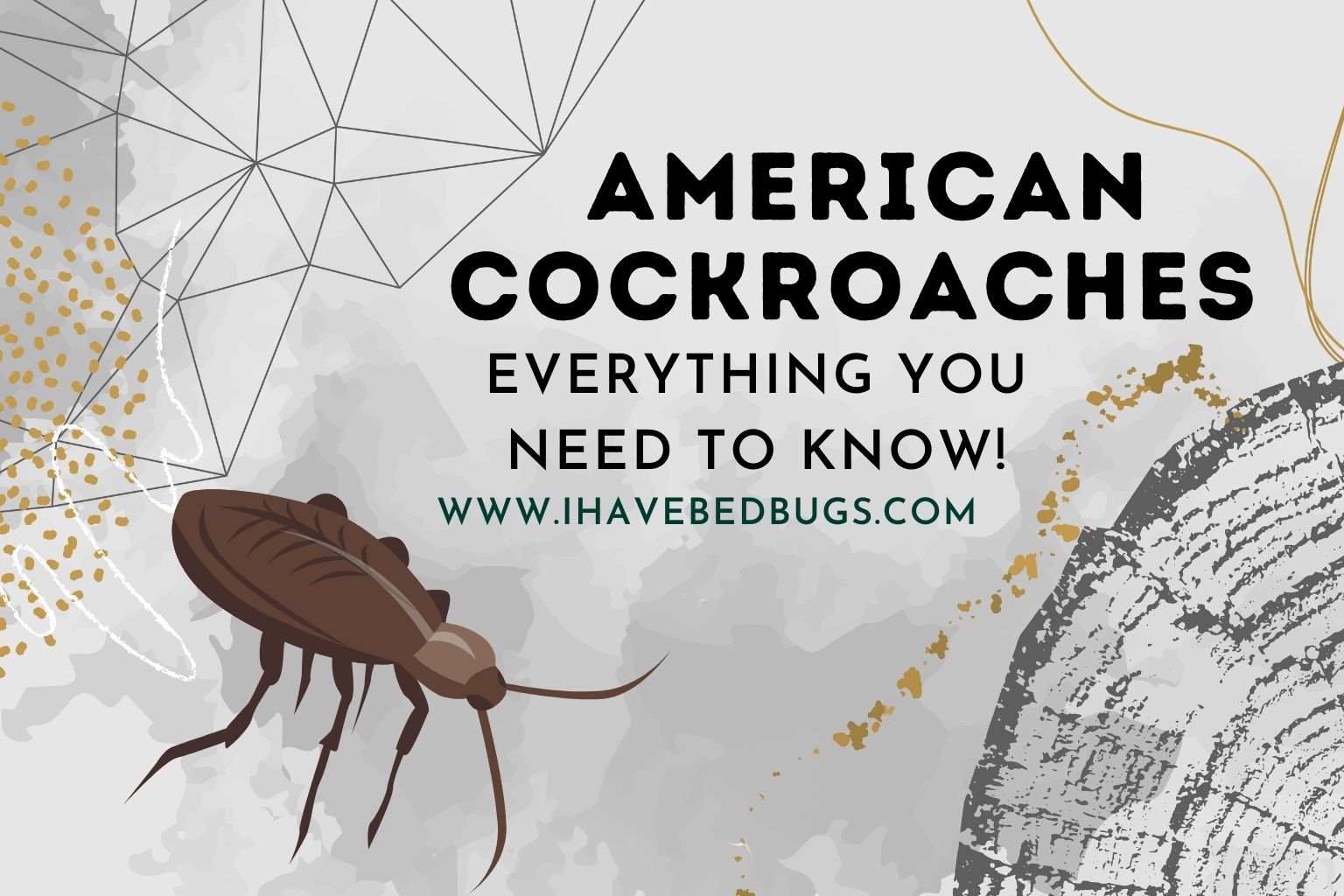 Are you fed up with your home being infested by cockroaches? Perhaps you keep seeing these insects around, and you can’t get rid of them.

There are over 4,500 species of cockroaches; however, only thirty are considered pests. Unfortunately, American cockroaches are one of them, and they plague homes, restaurants, and warehouses across America.

In this article, we’ll look at how to identify these pests and how to prevent them. Let’s get started.

What Is an American Cockroach?

The American cockroach, a major pest in America, is known by several names, including Periplaneta Americana, the palmetto bug, and the Bombay canary. Although they’re not aquatic insects, people often refer to them as the “water bug.”

Furthermore, identifying an American cockroach is easy: adult American cockroaches are reddish-brown and are usually spotted with a yellow band on the back of their head. Plus, they have six legs and can grow up to 54 mm.

Like other cockroaches, they have antennas and wings, but they seldom fly. Even when they do, they can only fly short distances. However, they can move quickly and dart out of sight when they feel threatened. Plus, immature cockroaches resemble adults, only that they don’t have wings, and hence, don’t fly.

Although they’re house-infesting roaches, they’re also present in food places like restaurants and bakeries and other buildings like grocery stores and pet shops.

Female water bugs usually start the courting process. First, they raise their wings and expose their integral membrane, which expands their genital chambers. Then, they release a substance known as a pheromone, which attracts the males. This is because male American cockroaches have special sensory organs that detect the smell of the pheromone.

The males respond by approaching the female and flapping their wings to show they’re attracted. The process ends when the males deposit sperm into their mate.

American roaches have three developmental stages: egg, nymph, and adult. First, the females produce an egg case, also known as ootheca, which protrudes from their abdomen. Female American cockroaches can produce up to 90 oothecae, but they produce about ten eggs on average.

After two days, the female finds a safe location and places the egg cases on the surface. The cockroaches emerge from the ootheca in six to eight weeks.

At this stage, they’re known as nymphs. However, they can be referred to as adults after they have undergone a total of 13 moltings. Molting is when an animal sheds the outer part of its body and replaces it with another.

Following their last molt, they acquire the features of an adult cockroach, such as wings and the ability to reproduce. The process of maturation can take six months to over a year. Thus, the whole life cycle of the American Cockroach, starting from an egg to an adult, can last up to 600 days.

What Do American Cockroaches Eat?

American cockroaches are omnivorous insects and will eat anything from glue to milk. Some of the things they could eat are decaying organic matter, fermenting foods, plant shoots, clothes, dead animals, and cheese. They’ll even eat pet food that’s left lying around.

American Cockroaches are known as one of the most dangerous pests in America for a variety of reasons. Their bodies carry pathogenic human bacteria, viruses, and parasitic worms, which can spread diseases like diarrhea, typhoid, and food poisoning.

Although American cockroaches bite, they seldom do. But if you’re bitten and suspect an infection, seek medical attention immediately.

Do you think you have a roach infestation on your hands? Here are some signs you should look out for.

American cockroaches produce solid cylindrical droppings that can be as large as a grain of rice. Their droppings look a lot like coffee grounds.

In addition, their droppings are similar to that of mouse droppings, so you can easily mistake an American roach infestation for a mouse infestation. Also, to ensure the kind of cockroach populations you’re dealing with, contact a pest control professional to identify the type of pest in your home.

As mentioned earlier, the female American cockroach looks for a safe place to place the ootheca or egg case. Your home is filled with plenty of sites that are ideal for the eggs to hatch.

After the cockroaches emerge, the egg cases, about 8mm, are left behind. The egg capsules are dark brown and usually get stuck to areas in your kitchen, laundry room, or pantry surfaces.

Presence of Dead or Live Cockroaches

Seeing American roaches in your home is perhaps the easiest way to confirm if you have an infestation. Although these pests hide in the dark, you’re likely to see them in the day if the infestation is large enough.

You might also see dead insects lying around, especially when cleaning your home.

Where Can You Find American Cockroaches?

Although you’re likely to find American cockroaches in your home, it’s interesting to note that their natural habitat is the outdoors.

These insects are usually found in areas that foster moisture retention, like flower beds, shrubs located alongside buildings, crawl spaces, beneath rubber mats, and under rubbish piles.

You can usually find them in drains, boiler rooms, steam heat tunnels, and sewers in the northern United States. They’re one of the most common cockroach species found in sewer connections.

American cockroaches enter your home if they’re threatened by food shortage or unfavorable weather conditions. They usually find their way into your home through drains and tiny spaces in walls and floors.

What’s more, American cockroaches prefer warm, dark, and moist areas with temperatures of about 84 degrees Fahrenheit. So, look in places like your kitchen, basements, food storage areas, and bathrooms for traces of these insects. Other entry points include air ducts, crawl spaces, steam tunnels, and utility pipes.

Once they get indoors, they’re automatically drawn to your kitchen and any other food place. And considering their original sewer habitat, they often transfer germs to food surfaces.

How To Prevent And Deal With An Infestation?

Is your house infested with these dangerous pests? The good news is that there are ways to execute American cockroach control successfully. But let’s discuss how to prevent it in the first place.

The best way to prevent an infestation is to keep your home clean and sanitary at all times. That way, you make your home less inviting for all kinds of insects, including cockroaches.

You should keep surfaces such as counters, sinks, and floors always clean. In addition, foods such as cereal and grains in airtight containers and pet food should not be left in open places.

Also, avoid keeping dirty dishes overnight or for days because American cockroaches are attracted to food particles and moisture.

In addition to this, ensure that you have sealed all your trash cans to prevent these roaches from entering. It would help if you emptied your trash cans regularly to avoid trash buildup and ensure that all holes and cracks in your walls and floors are sealed.

Once infested, you don’t need to worry as there are still ways to get rid of them. But, first, consider the measures mentioned above to prevent the worsening of the infestation.

Also, using pest control products is an efficient way to get rid of American cockroaches. Pesticides can draw cockroaches out of their hiding places and can even kill them.

Differences Between American And German Cockroaches

German cockroaches are another species of cockroaches that are considered pests. You might easily mistake them for American cockroaches, but some differences distinguish the two.

You can find German cockroaches in areas around your kitchen and bathrooms. On the other hand, American cockroaches usually gather in basements and around drains.

German cockroaches are light brown, almost tan-like in color, with two dark brown parallel lines along their back, reaching to their wings. American cockroaches, however, are reddish-brown and spot yellowish highlights on the back of their heads.

Difference Between American and Oriental Cockroaches

Oriental cockroaches can also infest your home, but how different are they from American cockroaches? First, let’s look at some differences between the two insects.

American cockroaches are larger than their oriental cousins, with wings covering their backs. Oriental cockroaches, on the other hand, have wings that reach halfway down their back.

You will often see American cockroaches darting from one place to another in a quick way, but Oriental cockroaches move much slower.

Although cockroaches, in general, are filthy pests, knowing the kind of cockroach you have in your home will help you understand how to get rid of them.

An American cockroach infestation can cause damage to your property and pose a sanitation risk. In addition, it can cause diseases that’ll require trips to the hospital.

Keeping your house clean is one way to ensure these insects don’t infest your home. Alternatively, you can use pest control products. If the situation is serious, call an exterminator to ascertain the extent of the infestation and get rid of these dangerous pests.