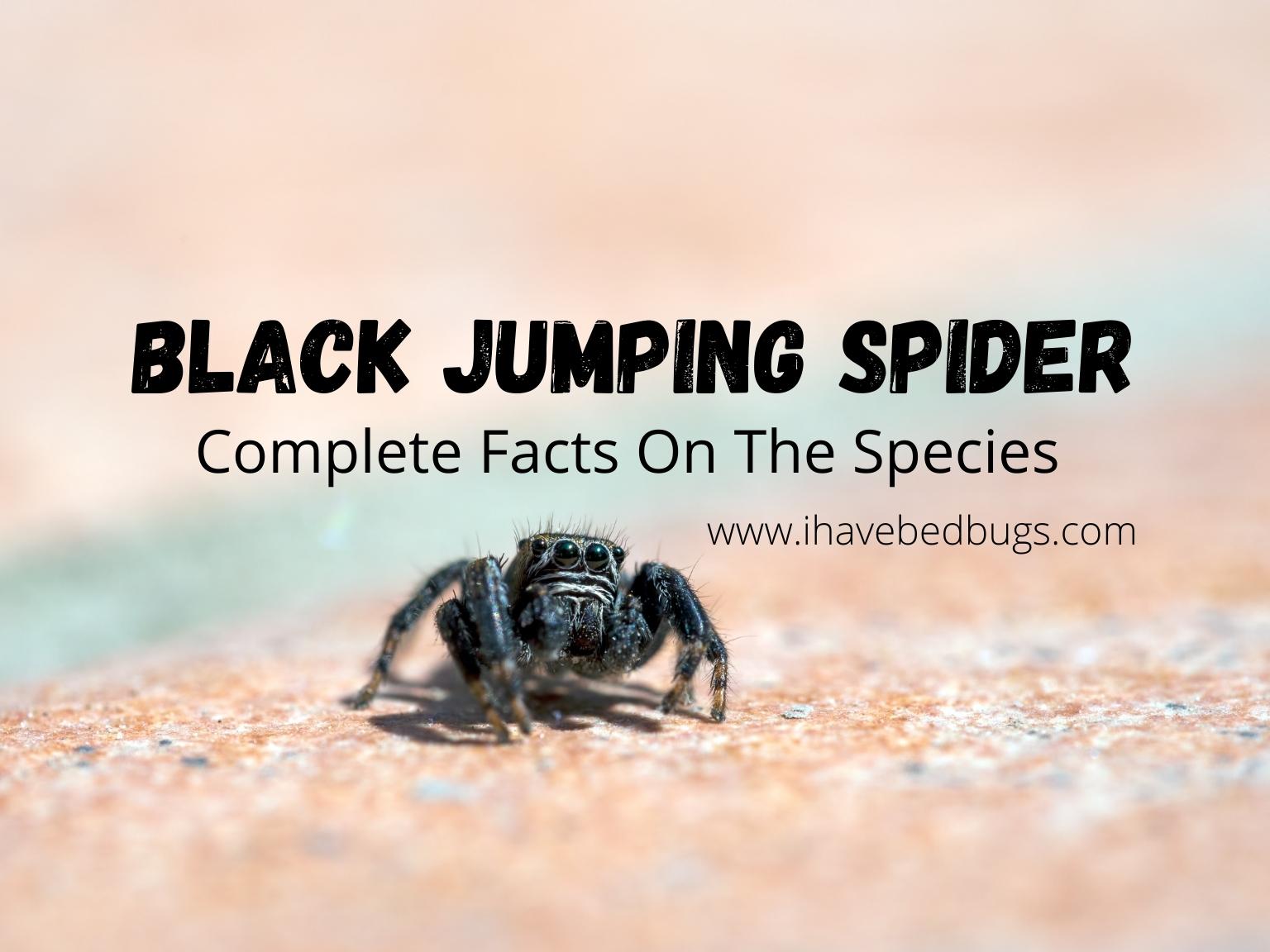 Whether you’re fascinated by jumping spiders, or you’re wondering which spider you have in your home, the black jumping spider is worth knowing. It’s one of the most common species of jumping spiders out there.

In this article, we’ll walk you through what these spiders look like, their natural habitat, and what they eat. We’ll also discuss signs of an infestation and ways to prevent it. So, let’s dive in!

What Are Black Jumping Spiders?

The black jumping spider has some features that distinguish it from other insects. Let’s go through some of the key ones.

Just like their name suggests, black jumping spiders are black. They also have a combination of spots and stripes on their abdomen and legs.

These spots are usually orange in the early months of their life and turn white as they mature. However, some bold jumpers have red, yellow, or orange spots. Also, the area around their mouth is often bright metallic green, or blue.

The Phidippus jumping spiders have four pairs of eyes. Three pairs are fixed in their position, and only one pair can be moved.

The posterior lateral eyes (PLEs) act as motion detectors and are used to sense motion from the side and behind the spider. The PLEs can’t form objects. Rather, their function is to receive light from the sky.

What’s more, jumping spiders have stereoscopic vision, thanks to their anterior lateral eyes (ALEs). Stereoscopic vision describes the ability of the eyes to see the world in three dimensions. The third pair of eyes, known as the anterior median eyes (AMEs), gives the spider excellent vision. These eyes are built closely together and act as a telescope.

The last pair of eyes act as the primary source of vision for the black jumping spider. Referred to as the principal eyes, they’re shaped like long tubes protruding from the spider’s head. These eyes have tiny retinas; hence, their field of vision is limited.

Most jumping spiders are attracted to open areas to catch prey. However, since they don’t use their web to catch food, they live in spaces where they can find other insects for food.

You’ll usually see them in fields, grasslands, or gardens. However, you can also find them in your home. They’ll enter through objects that you carry into your house in most cases. Cracks and crevices can also be entry points for black jumping spiders.

Once they get inside, they weave webs that resemble tunnels in hidden places like behind your furniture or cracks.

These small arachnids are omnivores. They mostly feed on smaller insects or just about their size, like mosquitoes, flies, bees, and other spiders. Their name perfectly describes how they catch their prey; they jump and pounce on them.

These spiders have a well-developed hydraulic system that helps their limbs extend, making it possible for them to jump further than the length of their bodies.

To avoid falling when they jump, they tether themselves to a filament of silk to whatever surface they’re standing on. So if they fall, all they have to do is climb back up the silk. In our opinion, this is one of the impressive features of the black jumping spider.

Courting begins with the male making advances towards the female. The male does this by lifting his legs to show off his colored spots.

Like other spiders, the male black spider has no reproductive organ. Instead, the semen is transferred to the female through a highly specialized appendage of the palpus during mating.

A jumping spider infestation is not hard to spot. Below are some pointers to help you get started.

Like all other spiders, the black jumping spider spins silk webs. However, its webs are loosely built. This isn’t surprising since it doesn’t use its webs to trap prey.

If you discover an intricately woven spider web, you may have another species of spiders in your house, not the bold jumper.

Presence Of Life Or Dead Spiders

If you have black jumping spiders in your house, you can easily identify them by their quick movements. They’re known to jump out of sight speedily when they encounter a likely threat. In addition, they usually hunt for prey during the day, so you’re more likely to see them when there’s light.

Although they’re relatively small, you’ll likely see dead bold jumpers around your house. If you see one dead spider, there are probably a number of live spiders in your home.

How To Prevent A Black Jumping Spider Infestation

You should note that these arachnids are not a major threat if they enter your house. However, you’ll probably not want to see them jumping around. So let’s look at ways to prevent black jumping spiders from entering your home.

Keep in mind that if you suspect a serious infestation, you should contact a professional exterminator to determine the extent of the invasion and get rid of the pests.

Male and female regal jumping spiders have distinguishing features. For one, males are always black with white spots and stripes, similar to the black jumping species.

However, although black, the females have different colored spots or stripes ranging from grey to orange. Also, the arrangement of the three spots on their back looks like a smiling face.

Both jumping spiders prefer open regions such as grasslands. However, the black jumping spider is more likely to be discovered hiding in homes than the other species.

Let’s now look at some differences between the white mustache spiders and black jumping spiders.

The carapace or outer shell of a mustache jumping spider is orange-brown. This spider has a long white mustache along the bottom of its carapace, hence, its name.

Its legs are dark brown with light markings on the sections of legs that are closest to its body. Also, white mustache jumping spiders are brighter than black jumping spiders, who are mostly black with white markings.

Can I Keep A Black Jumping Spider As A Pet?

Yes, you can keep black jumping spiders as pets. However, it can be difficult to catch these small insects since they move with quick jumps. But once caught, they’re easy to keep because of their size.

You can use a jar or tank to keep your black jumping spider. However, keep in mind that it likes jumping and can easily escape if you open the container you’re keeping it in.

How Far Can A Black Spider Jump?

The black jumping spider can jump 10 to 50 times its own body length. Don’t be deceived by the size of its body. These amazing jumping skills come in handy when it’s hunting for prey.

Bold jumping spiders can go days without eating. If you’re keeping them as pets, you should feed them every two to three days.

Like every other pest, it can be annoying to see black jumping spiders around your home. However, you don’t need to worry; they’re not dangerous spiders. They’re also not known to bite humans. Plus, their bite isn’t fatal; you’ll experience little pain and itching from a jumping spider bite.

Phidippus audax can live between six months and a year. It has a very short lifespan compared to other insects.

Overall, we’ve looked at some characteristics that’ll help you identify jumping spiders, whether they’re black, white mustache, or regal. We’ve also discussed how to tell if you have a black jumping spider infestation and ways of its prevention.

Keep in mind that the bold spiders don’t cause any serious harm, but their presence in homes is often met with displeasure. So, if you suspect an infestation, you should contact a professional to determine the level of the threat and solve the issue.

You can also keep them as pets if you’re a lover of spiders. They don’t require much care and attention, and they’ll make a great addition to your pets’ collection.