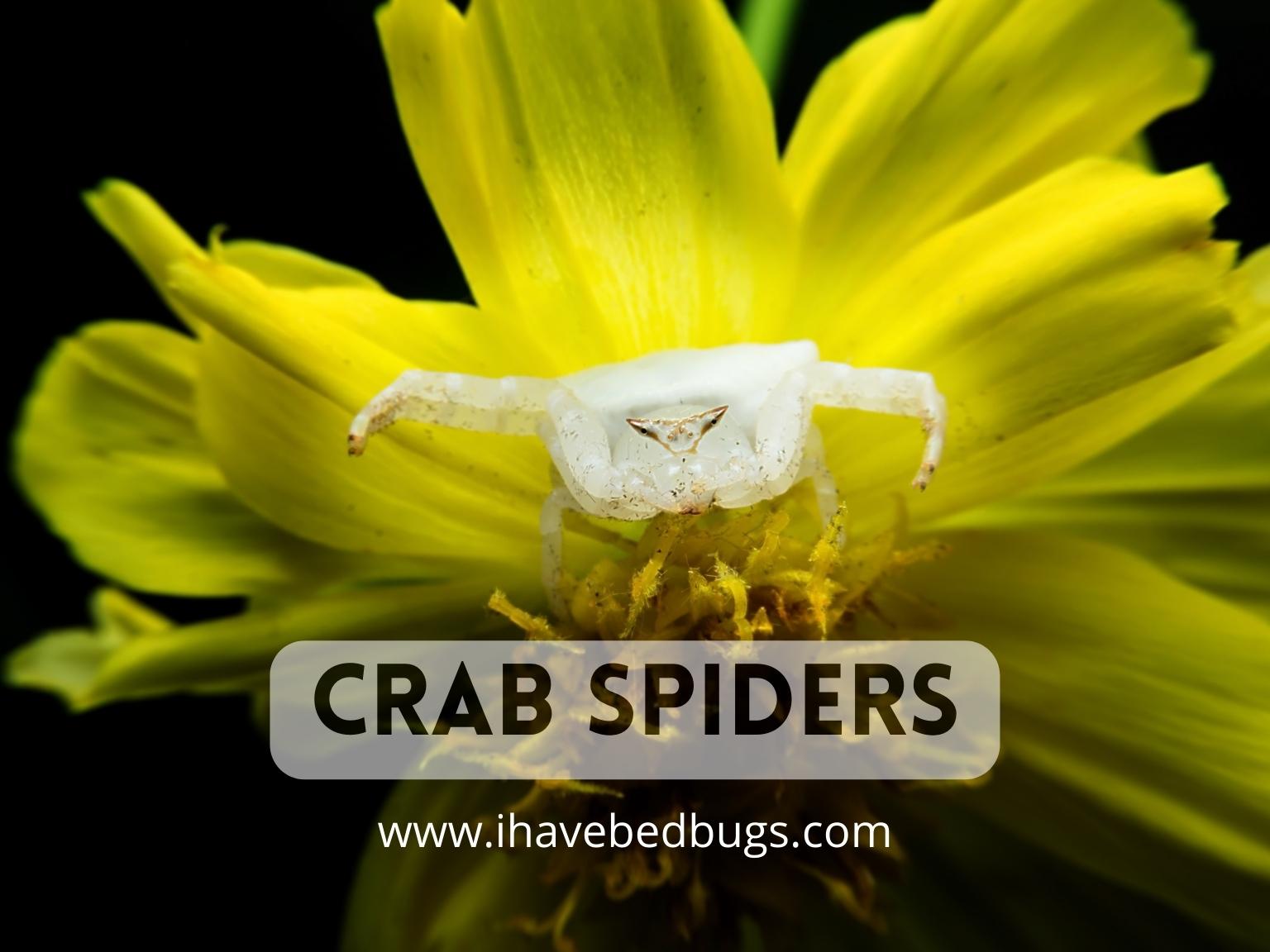 As the name may suggest, crab spiders are spiders that exhibit crab-like features and characteristics. These spiders have larger front legs and often run sideways and backward like crabs.

We’ve put together a full guide on the species so you can get to know these arachnids better. So without further ado, let’s get straight into it.

Crab spiders belong to the Araneida order of the spider family Thomisidae, and this family has over 2,000 species and 170 genera. Crab spiders live worldwide.

Although crab spiders scientifically belong to the family Thomisidae, the term “crab spiders” can be broadly used to describe any spiders with a crab-like appearance.

Here, we’ll discuss the most common species of this type.

Goldenrod crab spiders, also known as flower crab spiders, are a Thomisidae species with a Holarctic distribution. These spiders belong to the Misumena vatia species and earn their name from residing in daisies, goldenrods, and other plants with white or yellow flowers.

They can be found, for example, on Queen Anne’s lace or oxeye daisy flowers where they turn white to hide and turn green as they move to green flowers and so on.

A Misumena vatia is a camouflaging ambush predator that waits for its prey to come to it. Once the prey arrives, the spider bites and paralyzes it with its crab spider venom. These flower spiders mostly feed on flies, bees, and butterflies.

Misumenoides formosipes get their name from the ridge that runs under the spiders’ eight eyes; the ridge is often white, but it can be yellow sometimes.

Northern crab spiders belong to the Mecaphesa asperata species of the Thomisidae family. Geographically, these flower crab spiders are commonly found in North America, the Caribbean, and Central America. The name “flower spiders” comes from the fact that these spiders hunt in flowers of similar colors.

Physically, the most characteristic feature of this spider species is the short, spiny hairs covering most of its body; the tiny hairs can be found on the top surfaces of the spider’s carapace, abdomen, and four pairs of legs. In addition, these spiders come in various color combinations that it’s often hard to identify with certainty.

Bark crab spiders belong to the species Bassaniana versicolor, and three species of this genus live in North America.

As the name suggests, bark crab spiders live on or under tree bark where they can hide well because of their flat bodies and can pounce when needed.

Like many crab spiders, the female spiders are larger than the males and have flatter bodies.

So why do we call them crab spiders then? It’s because these arachnids hold their front legs and move in a very similar behavior to true crab spiders.

This species of crab spider, or Celaenia excavate, is a mottled brown crab spider species that has this interesting name because it mimics bird droppings to avoid predators.

The bird-dropping spider is also called the orchard spider since it’s often seen on fruit trees where its main source of food, moths, is abundant.

Most crab spiders are roughly 12 mm in body length with brown or grey bodies, eight legs, small fangs, and eight eyes. Their bodies are usually flat, short, wide, and bilaterally symmetric, and their two front legs are longer and bigger than their back ones. To move, the spiders use their back legs while their front pair is held open to capture their victims.

Males and females of a crab spider exhibit different types of sexual dimorphism, including size and color. Crab spiders often have smaller males than females, and some crab spider types have different colors between male and female members.

Unlike other species of spiders, crab spiders don’t build webs. Instead, these insects wait for their prey in hiding, often via camouflage. A crab spider is not a social animal; it often lives alone and hunts alone. While a crab spider ambush predator sits, hides, and waits for its prey, other crab spider species go out to capture it.

How Do Crab Spiders Breed?

A few weeks after mating, the female crab spider lays eggs into two joined silk egg sacs and stays nearby to protect the eggs. The hatched spiderlings look exactly like the adults but are smaller. Before the small spiders become mature and fertile, the spiderlings undergo multiple shedding cycles, where they shed their exoskeletons and get new ones.

What Do Crab Spiders Eat?

Crab spiders feed on plants and leaf litter and the invertebrates that live in them. In addition, they capture insects and insect pests like mites, which is why they’re of great help to farmers. Sometimes, these spiders feed on beneficial insects, such as the honeybee, but that isn’t usually a problem.

Many spiders of the crab type have small venom-bearing fangs to capture and paralyze their prey. However, crab spiders aren’t aggressive and won’t poison humans despite being venomous. Their small fangs are usually too small to puncture human skin, but the fangs of a giant crab spider can break that skin barrier.

Crab spider bites can be painful but won’t leave any lasting effects; the swelling often subsides within a few hours.

How Do Crab Spiders Defend Themselves?

The most common threats to crab spiders include ants, lizards, shrews, birds, wasps, and other spiders. For their defense mechanism, crab spiders often resort to camouflage. However, if the predator is an invertebrate, the crab spider can bite.

To sum up, crab spiders are spiders that exhibit crab-like features. They often are ambush predators and feed on flowering plants, insects, and pests. These arachnids usually live outside and pose no significant threat to humans.