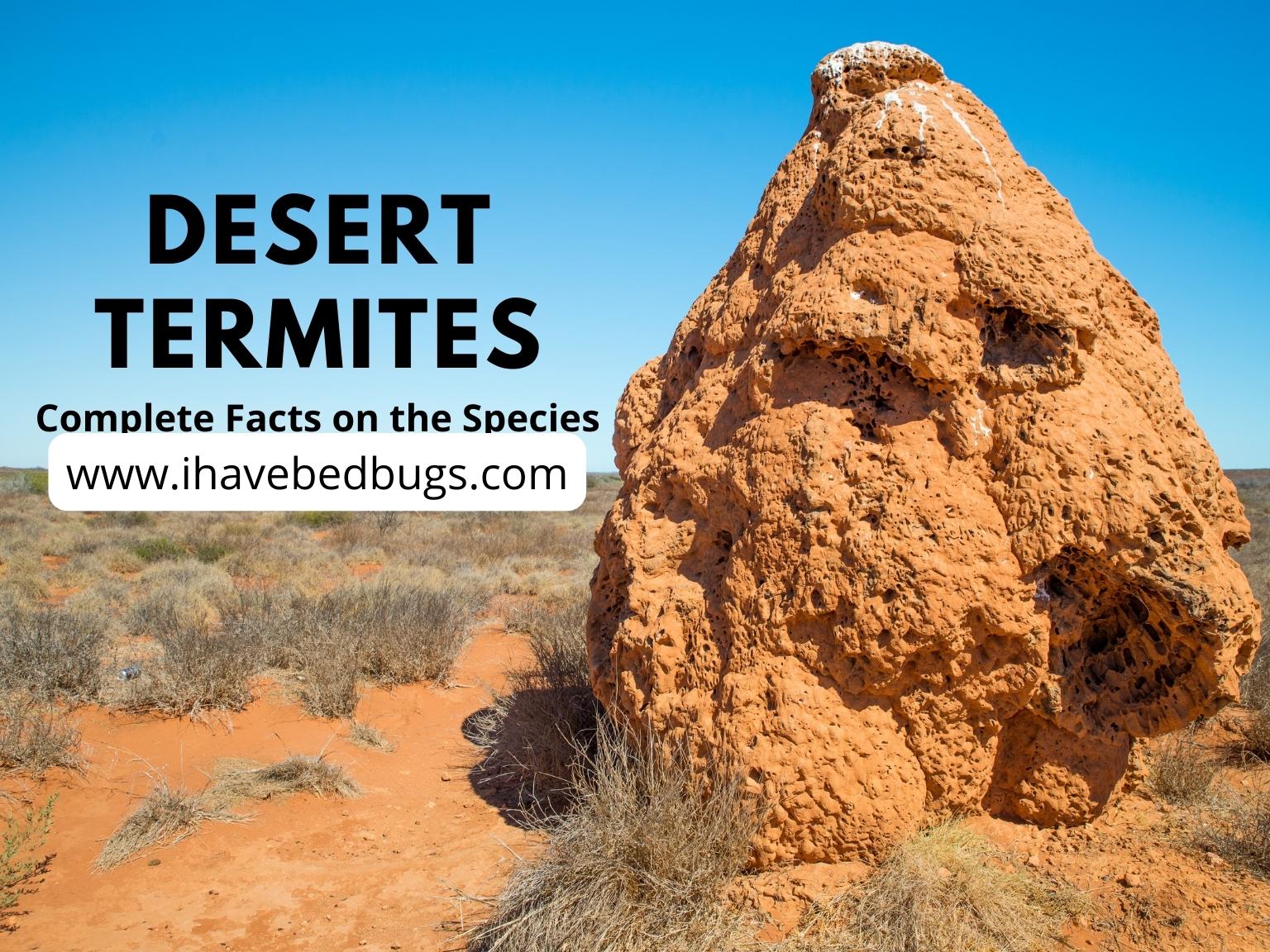 The only thing worse than having a termite infestation in your house is not knowing about it. That’s why you should learn about the different species and their control methods. Today, we’ll discuss desert termites.

To begin with, desert termites are a part of a much bigger group called the subterranean termites. As their name indicates, they mostly form their colonies underground, where they create mud tubes to move around and feed safely.

The first thing you should know about those termites is how they look. This will significantly help you if you ever suspect a desert termite infestation in your house. First, desert termites are much smaller than other subterraneans, with the swarmers measuring between half an inch and 5/8 an inch. Second, they have rectangular heads that are adorned with pale brownish-yellow and flat bodies.

There are three main types of desert termites: swarmers, workers, and soldiers. Each has their role that they need to carry out to keep the colony alive. The desert termite swarmers, also known as the reproductive caste, have light brown wings that you can easily distinguish from the typical transparent wings of the rest of the subterraneans.

As for soldiers, they have slim, strong jaws that they use to defend the colony, unlike Formosan termites, which have curved and thick mandibles.

Finally, worker termites are the most common of the three types, and they work on maintaining the colony and providing it with food, making them the foraging termites.

As we’ve mentioned before, desert termites are common in Southern California, Southern Arizona, and West Texas. This is mainly because of the optimum living conditions provided there. Luckily, they aren’t as destructive as other subterranean termites to human properties. For example, they rarely invade houses and feed on wooden structures, unlike other termites who can wreak havoc on homes.

Regarding behavior, desert termites have a high chance of losing their moisture due to living in hot places. To overcome this issue, they build tubes made out of termite cartons, a material made out of feces, moist soil, and saliva.

Additionally, they have a habit of tunneling, which causes soil to become porous. This results in a significant improvement in rainfall infiltration and plant growth around arid regions.

However, during harsh drought conditions, those termites may remove enough soil surface litter to cause a problem, which is mainly a significant impairment of rainfall infiltration.

In winter, desert termites dive deep into the soil so that they can protect themselves against low temperatures, and they mainly eat live grass plants during summer. In addition, desert termites feed on plant litter and dead grasses in the fall. Finally, desert termites like to move around at night, especially during rainy summer times.

As their name indicates, the main job of the male and female reproductives is to produce offspring. The queens of desert termite colonies lay eggs, and after those offspring grow wings, they leave their original colony and look for their mates so that they can form a new colony. Another term for this process is swarming.

Like any other living species, desert termites have a role in nature that they have to carry out to keep the ecosystem balanced. In general, those termites decompose plant material significantly in the Chihuahuan Desert. This aids other species, like insects, for example, in feeding. But how do they do that?

Well, termites convert cellulose into an edible material because not all other insects have the ability to digest it. In addition, the tunnels that desert termites form to survive help in aerating the soil and providing a clear path for water infiltration.

Although desert termites rarely infest houses, there’s still a chance. Accordingly, you should be aware of infestation signs. First of all, mud tubes are a very distinguishable sign. This is because termites often form them in walls and solid objects so that they can reach their food source. In addition, those mud tunnels are usually narrow and pale yellow in color in terms of appearance.

Second, you should look for swarmers around your house. If there’s an infestation around, it’s highly likely you’ll see a couple of swarmers and shed wings around house entries and areas where your home comes in contact with the soil.

Finally, damaged woods are a strong indication that you have an infestation. Those sneaky pests often leave honeycomb-like patterns in wood, which renders the wood softer than before.

Although desert termites are often harmless, it’s still better to get help when you see infestation signs. You should reserve an inspection with a professional pest control company for starters. They’ll be able to identify the types of termites that are infesting your house and make sure that they’re desert termites and not another destructive type.

While there are no control measures specific to desert termites, there are a few points that pest control professional workers will consider. For example, they’ll determine the extent of damage and how large the area they’ll treat is. In addition, they’ll evaluate the termite density in that area and calculate the entire control cost so that you can know what to expect.

Finally, you should ensure that the termites won’t invade your house again. To do so, you can use a termite repellent and build bait stations around your place. This way, you’ll be able to monitor termite activity. It’ll also help if you follow normal lawn care measures.

In general, termites don’t carry diseases from or to humans. The only health issue that they may cause is allergy and asthma attacks for people with sensitive lungs. This is because termite nests often have irritating particles that get spread around with the help of heating systems.

Luckily, worker termites and reproductives don’t bite. The only type of termite that can bite humans is the soldiers. This is because they have large jaws that they use to protect their colonies and attack intruders. However, it’d be best if you didn’t worry because they don’t do that unless you try to handle them.

Is A Desert Dampwood Termite The Same As A Desert Subterranean Termite?

No, it’s not. Dampwood termites are a different species of termite that live in wet wood, while subterranean termites form new colonies underground. The same goes for drywood termites which are another species that feed on dry wood, such as that in hardwood floors and furniture.

Do All Termite Types Require The Same Termite Control Measures?

Not necessarily; there are different types of measures that professionals use. However, not all of them are suitable for controlling desert termites. The main five types of control are chemical treatments, bait stations, tenting treatment, fumigation treatment, and heat tenting treatment.

Desert termites are among the least destructive types of termites. They mainly live in deserts where low-humidity conditions monopolize. So while they may infest houses, it isn’t a high probability compared to other termite species.

If you want to keep desert termite colonies out of your soil, you should regularly tame your grass and provide it with adequate water.

We hope you have enough information about desert termites now!