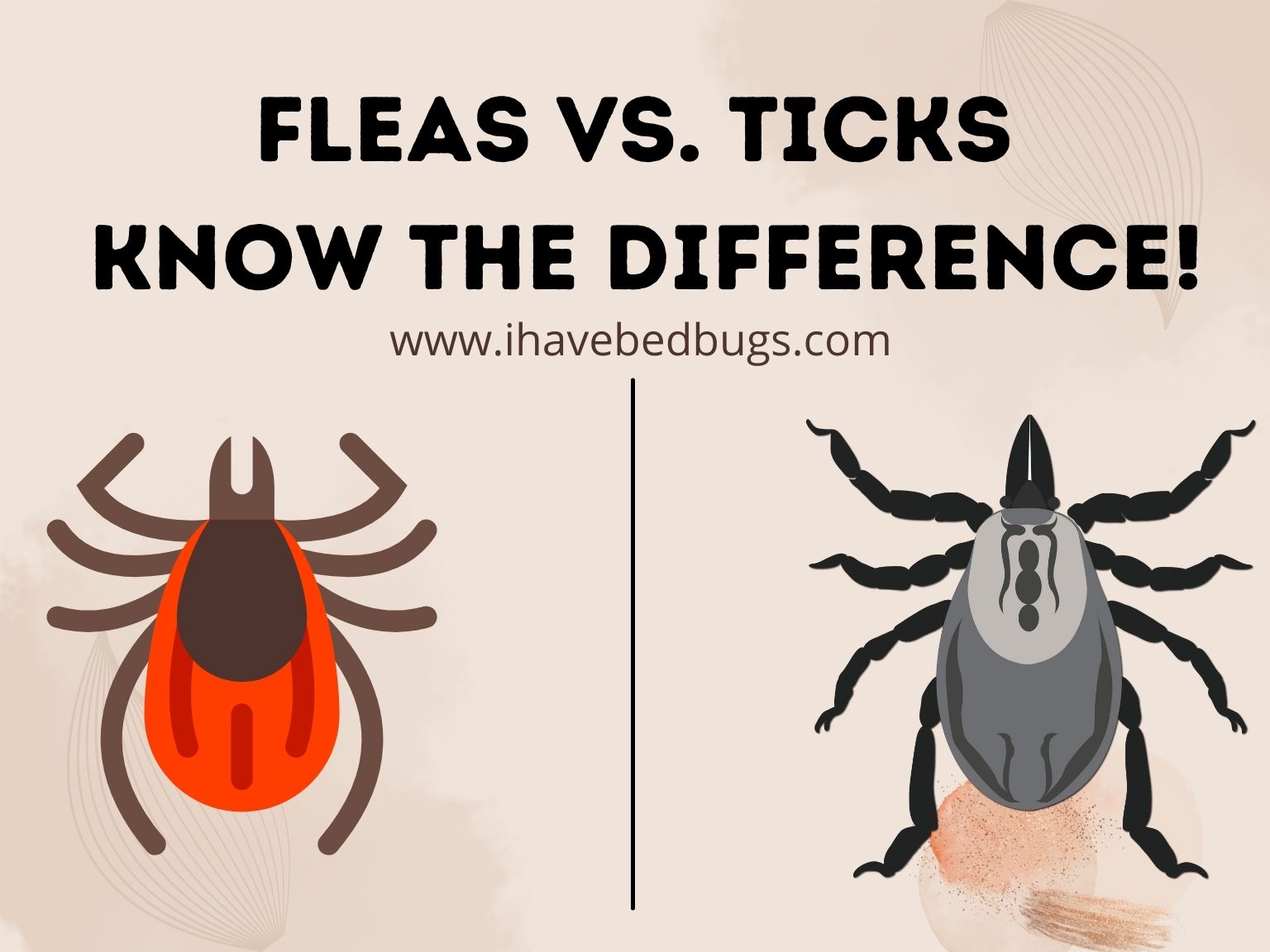 Not only are ticks and fleas often mistaken for one another, but both can transmit some potentially deadly diseases to humans. Not to mention, they’re very uncomfortable to deal with.

So it’s really important to learn how to differentiate between the two in order to decide on the best pest control/prevention methods. Here’s everything you need to know.

Fleas vs. Ticks: The Full Comparison

Both of these pesky parasites share a few criteria; both insects feed on blood, are of the same color palette (browns, blacks, and dark reds), and prefer furry hosts and warmer climates. Still, they do have several profound differences.

Fleas are wingless insects that have antennae and six legs. They have the ability to jump 7 inches vertically and 13 inches horizontally. As for appearance, fleas typically have a reddish-brown color.

And when adult fleas find their way to your pet’s fur, you’ll end up seeing a tiny 1/16 inch to 1/8 inch insect. They can be invisible to the naked eye at first, but they do get larger as they feast on your pet’s blood (they feed up to 15-times their body weight). 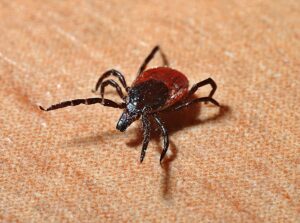 Ticks, on the other hand, have eight legs since they belong to the arachnid family. And they, too, grow up to 1/4 inch in size as they feed on your pet’s blood.

And since there are several tick species, they have a wide array of colors. Some species have dark specks on them, while others have white spots. However, generally speaking, ticks have a reddish-brown color, too.

The life cycles of fleas and ticks are somewhat distinct, which makes dealing with an indoor infestation quite different for each of them.

Fleas prefer to spend the entirety of their lifespan (about 100 days) on one host. They’re always content where they are, especially during the warmer months. So, there’s no getting rid of their irritating bites unless you take proper pest control measures.

As for their reproduction cycle, a female flea can lay up to 50 eggs per day, and the eggs hatch when the mother dies, producing even more fleas. So it’s an endless cycle that’ll only be broken when something is administered to kill fleas.

On the other hand, Ticks have different lifespans depending on their type, but they typically stay on one host for a few days up to two weeks before moving on to the next victim.

Reproduction is another difference between ticks and fleas. Ticks can lay eggs on any surface (even on the ground), not just on the host, and a female tick can lay up to thousands of eggs at once.

As we’ve mentioned before, fleas prefer to spend the entirety of their life on one host. They feed on the host’s blood, lay eggs on their skin, and when it’s time, the eggs hatch and carry on with the process, not caring much for changing the host or surface.

Even the eggs that tend to fall off are bound to one of two fates; either they’ll die out, or they’ll be able to latch onto the host one more time.

On the other hand, ticks typically change hosts quickly, and they aren’t exclusive to domestic animals; they can also latch themselves on lizards, snakes, and other creatures.

Generally speaking, flea bites are initially more annoying than tick bites because when an adult flea bites a human or an animal, it injects its saliva into the skin, which can carry all sorts of allergens, bacteria, and diseases.

But, the first thing you’re going to notice will be the usual signs of an allergic reaction, such as redness, itchiness, rashes, and even scabs. You’ll notice it as redness on your pet’s skin, mostly around its face, since that is the part for the least amount of hair. 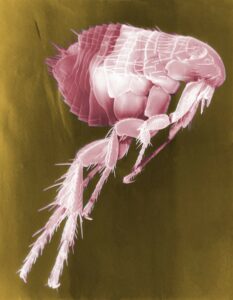 As for ticks, and since they latch onto one spot on the host’s skin, their bites have a more subdued list of symptoms. It’s after the tick has been extracted that the swelling, soreness, itchiness, and redness start to show. And beware of these symptoms because they might very well progress into some very serious diseases.

Consequently, you’ve to be extra careful when removing a tick from the skin, as twisting or breaking the tick will expose the wound to all the toxins in its body, which will, in turn, increase the chances of catching tick-borne diseases.

Adult fleas can carry a flu-like bacterial illness called bartonellosis as well as typhus, which is caused by an organism known as RIckettsia. They can also carry cat scratch disease, which is another bacterial disease caught when an infected cat licks an open wound on a human.

Ticks, on the other hand, can transport bourbon fever, a virus discovered in 2014 that affects the blood cell count, causing leukopenia and thrombocytopenia in addition to general symptoms of vomiting, rashes, body aches, and nausea. As you can probably guess, this virus is highly progressive and dangerous, so it must be treated immediately.

Furthermore, ticks can transport rocky mountain spotted fever, which can also be deadly if not treated immediately with proper antibiotics. Rocky Mountain spotted fever presents with flu-like symptoms like fever, rashes, and severe headaches. So it can be quite tricky to catch.

Removal of Fleas and Ticks

How do you rid your pets of fleas and ticks before they spread disease? Well, for fleas, there are many treatments that prevent fleas from reproducing or prevent their eggs from hatching.

Some of these treatments are oral, and some are topical, and they’re often administered from two weeks to three months. So consult with your vet to know the proper treatment for your pets, as it differs according to their age, weight, and prophylactic-treatment tolerance.

There are also specific shampoos that kill off the fleas. However, they can be too aggressive or toxic, so they aren’t vouched for by many vets. 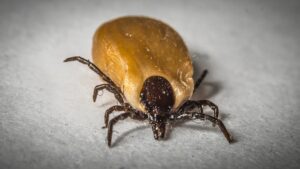 Also, one of the most common ways of getting rid of fleas is giving your pet a dish-soap-and-warm-water bath. Dish soap will kill all the living fleas and eggs, and you can go over their fur with a fine-tooth comb specifically designed to extract all of the fleas, flea eggs, and dirt.

What about ticks? What to do if you find one on yourself or your pet during your regular tick check? Well, you’ll need to gather these supplies:

Once you have your supplies at hand, put the tweezers as close as possible to the skin around the tick. Then, pinch the tweezers to get a good hold of the tick, but don’t twist or squeeze. Then, pull straight and steady without too much force till the tick loses its grip on the skin.

Once you’ve extracted the tick, we know this isn’t your favorite part, but thoroughly examine it and make sure you have the entire tick. Any remaining part of it inside the skin will cause a severe infection and might require re-opening the wound.

Pest Prevention of Fleas and Ticks

Now that you’ve discovered and removed insects from your pet, how do you go start flea and tick control around the house?

First off, make sure that your pets aren’t sitting in an infested area when spending time outdoors. Areas near fences and shaded areas with tall grass are considered potentially infested areas.

Additionally, for the best pest control results, you must have regular flea and tick checks. Ensure that you expose the skin very well, especially around the neck, armpits, and ears, because these are the warm areas that these pests prefer to latch on.

Finally, to keep your pets safe, consult their vet about getting them on an anti-flea/anti-tick medication so that they’re fully protected from the very beginning.

As for your home, make sure that you vacuum everything constantly, particularly if you’ve been exposed to a flea and tick infestation before. That way, you’re not leaving any eggs lying around to re-infect your pets. You’ll also need to take care of your front and back yards; ensure that you don’t have long grass by mowing your lawn regularly.

Fleas usually don’t latch onto humans, yet they can bite. So if you get a flea bite, make sure that you get the proper treatment immediately to avoid any allergic reactions or any other serious symptoms.

As for ticks, they do infect humans. So, make sure to cover your arms and your legs when out in nature, especially around bushes and wooded areas.

Can Ticks or Fleas Live on Humans?

Yes, they can. Mostly, they’ll adhere to warm areas, like the armpits, groin, and scalp. So, if your pet had gotten infected, there’s a good chance that you have ticks or fleas, too.

What Kills Ticks and Fleas Instantly?

There are some oral and topical treatments that kill off fleas and ticks in thirty minutes up to three hours.

How Do I Know if My Dog Has Ticks or Fleas?

Keep a vigilant eye on your dog during tick season. Ticks are large in size, so they’re easier to spot, especially if your dog has fair fur.

As for fleas, you’ll be able to detect the flea dirt, which looks like black spots, before you can detect the living flea itself.

To wrap up, fleas and ticks feed on their hosts’ blood. The hosts can be humans, pets, and sometimes lizards and snakes.

Both insects don’t like the cold weather, so they often latch onto warmer areas like armpits, groins, and ears. And since they can both carry diseases, pest control is essential since some of these diseases can be deadly.