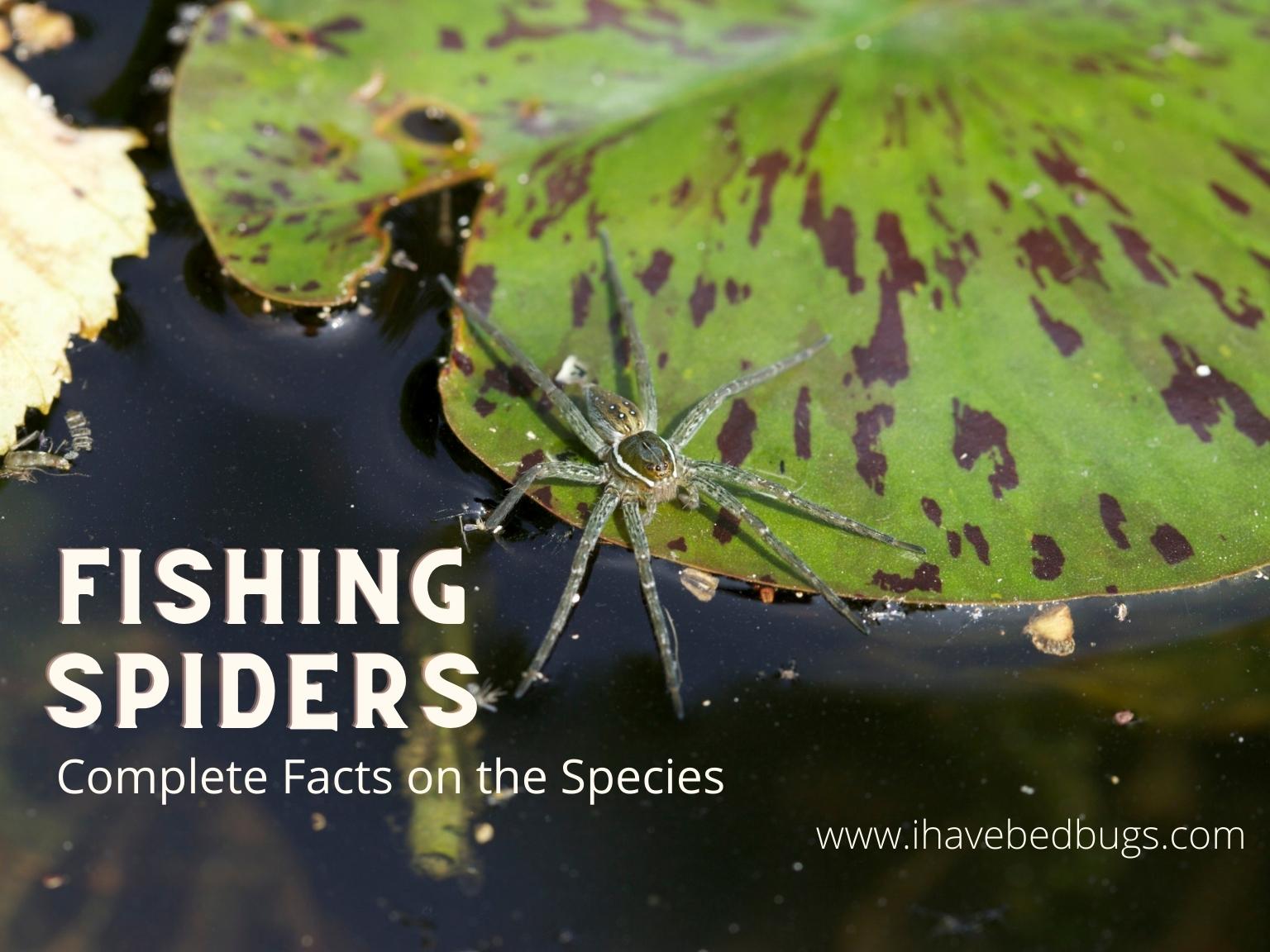 You might be wondering why fishing spiders are named that way. Well, these spiders are semi-aquatic. In other words, they live near water bodies and thrive on small fish and aquatic insects.

They’re able to do this because they can run on the surface of the water without drowning. Also, they can dive and hide underwater for a period, especially when preys pursue them. Fascinating, isn’t it?

Well, there’s a lot of other exciting things about this breed of spiders. In this article, we’ll walk through the key things you should know about them, whether you’re an Arachnologist, a curious researcher, or you want to get rid of them. Ready? Let’s get started.

Let’s start with the various names given to these spiders. Besides “fishing spider,” this arachnid is known by several other names. Each one speaks to a particular characteristic that the species has.

For instance, the fishing spider is also known by the scientific name Dolomedes. This name is derived from the Greek word “dolomidis,” which means crafty or deceitful. It describes how the spider lies in wait for prey until it’s ready to strike.

What’s more, fishing spiders are a part of the Pisauridae family, generally known as nursery web spiders. Other names for fishing spiders include raft spiders, dock spiders, and wharf spiders.

Fishing spiders are giant spiders. In states like Maine and Pennsylvania, they’re one of the largest spiders out there.

In general, female spiders are bigger than males. The average female measures between 15 and 26 mm, while males are typically between 7 and 13 mm. Note that both measurements don’t include their legs.

However, these spiders can stretch their legs to over 75 mm, making them appear a bit larger than the average person’s palm. Also, they aren’t so heavy; they weigh anywhere between 1-7 g.

Fishing spiders can be classified into various categories based on their color. For instance, the dark fishing spider is darker, while the striped fishing spider possesses more stripes. Both males and females are brownish-gray or tan in color, although you’ll find black and light brown markings on their abdomen. In addition, if you look at their legs, you’re likely to see black and brown-banded rings.

In addition, fishing spiders have hydrophobic hairs almost everywhere on their body. These hairs repel water and help keep the spider’s body dry and avoid drowning.

As mentioned earlier, fishing spiders get their name from how they can tread water surfaces and stay submerged. But what gives them that ability?

First of all, these insects have bristly or velvety hairs that can trap air bubbles. That way, they’re able to breathe underwater and remain buoyant without drowning. Fishing spiders are so good at this that they can even stay underwater for over 30 minutes at a go.

Also, these hydrophobic hairs create surface tension on water surfaces, allowing the spiders to stand or run across without drowning.

Unlike other spider species which hunt on land using a web, fishing spiders look for prey on the surface of water or close to it. For them, water surfaces are as good as webs.

They detect the presence of prey by stretching their legs onto water surfaces and sensing for vibrations and movement. They’re generalist predators, so they grab insects and invertebrates that they can get. However, typical victims of fishing spiders include mayflies, tadpoles, and tiny frogs.

Like many other species, these spiders reproduce when the male and female mate. However, after mating, the males always die. Even crueler, some female fishing spiders eat their partner as soon as mating is over. There’s no proven reason why this phenomenon occurs in fishing spiders.

After mating, the female spider lays a thousand eggs and places them in an egg sac, which she carries around. Before hatching time, the mother builds a nursery where the eggs can hatch comfortably. This nursery consists of a few leaves interwoven with silk strands in most cases. The mother remains around the nursery to guard and protect the eggs until they hatch.

The young spiders stay in the nursery for about a week, and they’re ready to leave by then. After leaving, they shed their exoskeleton periodically as they develop.

In general, female spiders live longer than males. While a male lives for up to a year and two months, female fishing spiders can live for two years.

Signs Of An Infestation

To know a fishing spider infestation, we need to understand where such spiders love to reside. Typically, you’ll find them under rocks, near woods, and of course, anywhere a water body is located.

So, if you have a lake, pond, reservoir, stream, or river close by, expect that fishing spiders might be around. In addition, if you have a swimming pool or a boathouse, your residence could be a good spot for them. Therefore, keep your eye out for these insects if you live in such areas.

The best way to do that is to be on the lookout for the molted exoskeleton. Because they shed off skin when growing, fishing spiders can be easy to spot. Besides, fishing spiders have a large exoskeleton, making them easier to spot than other spider species.

How To Get Rid Of Fishing Spiders

It’s worth noting that these spiders aren’t exactly poisonous or dangerous. However, although their bites aren’t fatal, they can be very painful. Besides, these spiders can cause quite an alarm because of their large sizes.

The first thing you have to do when you notice an infestation is to clean the area that’s likely infected. For instance, remove any bin or container that’s holding water. And if you live close to a pond or stream, make sure that the surrounding vegetation isn’t too bushy. Keep in mind that these spiders can reproduce quickly, so it’s best to act fast if you notice an infestation.

We recommend hiring professionals who have experience and expertise in dealing with such matters. Although it might seem expensive, you’ll save yourself the stress of trying to root out an infestation all by yourself.

In this article, we’ve provided you with some key pointers to help you understand fishing spiders and how to deal with them. Overall, knowing these spiders’ appearance, habitat, and lifecycle can help you see when you have an invasion on your hands.