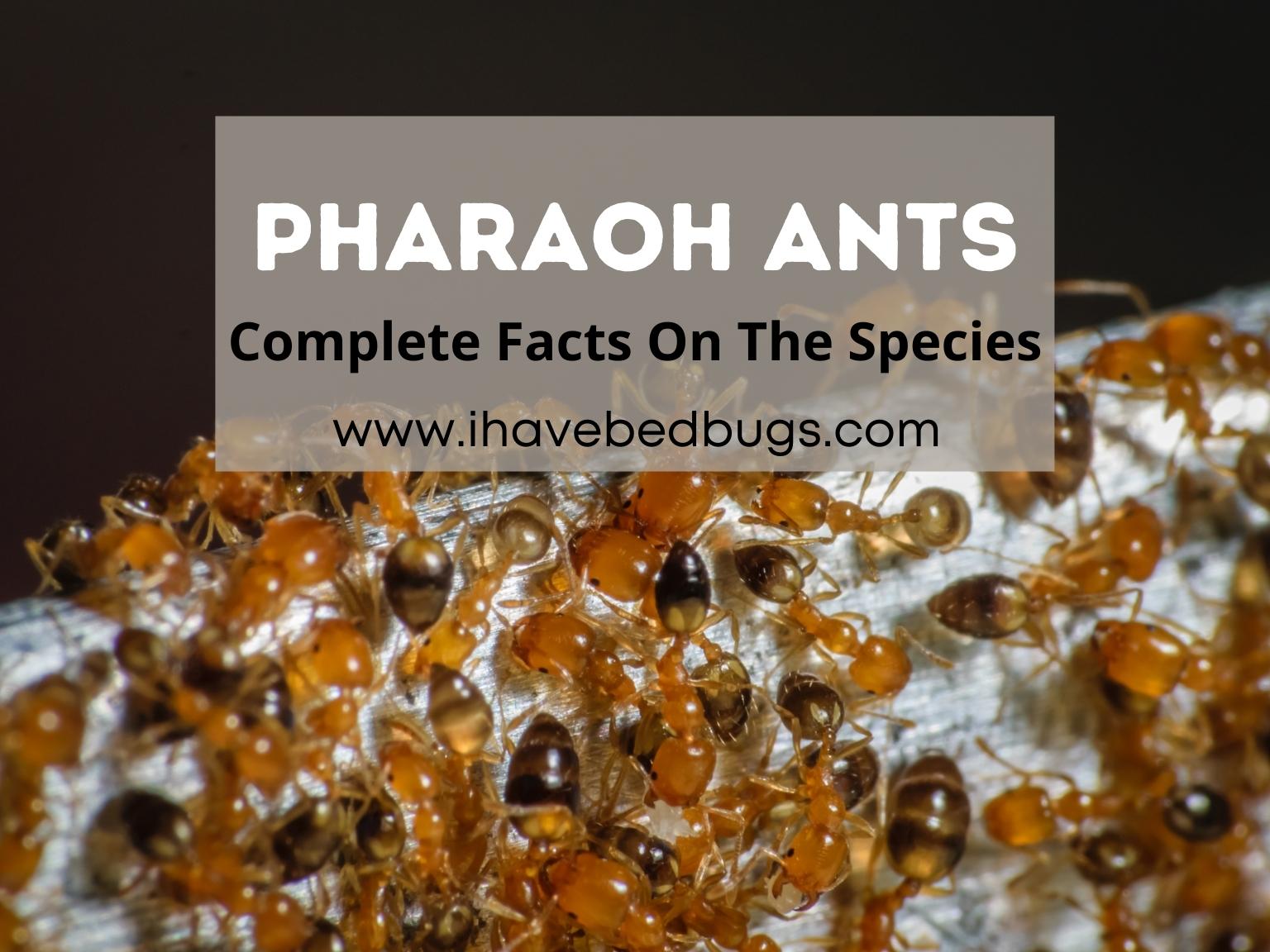 Famously known as the most difficult ants to eliminate from houses, pharaoh ants (Monomorium pharaonis) are sneaky insects that like to hide in places we can’t reach. Unfortunately, they’re often persistent, and they can survive living in colder regions by hiding in heated buildings.

They’re called that way because people mistakenly thought that they caused plagues back in Ancient Egypt. However, there’s no scientific evidence to back this fact. So while they’re strongly thought to have originated in Africa, they can now be found in the United States more commonly.

So without further ado, if you want to know all the complete facts on the species, just read on!

It is strongly believed that pharaoh ants originated in Northern Africa. However, they quickly became widespread worldwide because of commerce and trade. Currently, you can find pharaoh ants everywhere around the world except in Antarctica. In the United States, they prefer southern regions since they’re a tropical species. Specifically, pharaoh ants are common in both Texas and Florida.

Nevertheless, you might encounter them in the northern areas nesting comfortably inside heated buildings.

To begin with, Pharoah ants have small bodies that help them hide freely indoors in inaccessible areas without getting noticed. They look much like thief ants, so you may wrongly identify them at first. However, you can distinguish them by the number of segments on their antennae. Pharaoh ants have 12 segments, while thief ants have only ten.

Some people might also mistake a pharaoh ant with an Argentine ant, but Argentines are much darker in color. Pharaoh ants’ bodies are light reddish-yellow in color, with remarkably enlarged markings on their abdomens. They also have evenly rounded thoraxes with two nodes between the abdomen and the thorax.

The queens of this ant species are the largest out of all types at 1/8 inch, and they have wings but can’t fly. Meanwhile, the workers are nearly half that size.

Pharaoh ant populations can live in many different places because of their small size. Once inside a house, they’ll nest in a well-hidden, warm place like under carpets, inside floor voids, or wall voids, for example. Then, to forage for food, they leave trails behind them so that they’ll be able to find their nests again.

You might see those trails if you look closely near a food source in your house. However, there’s a slim chance that you’ll be able to find their nest.

On the other side, they often live in shaded places where moisture is widely available when they’re outdoors. So, for example, you might find them moving around your garden or lawn.

As for mating, pharaoh ants can mate and reproduce in their nests. However, once someone disturbs their colony or becomes too big, they leave by a process called budding, during which they split and create new colonies. Still, they don’t have nestmate recognition, so they don’t mark ants from other nearby colonies as foreigners.

Since their nests have multiple queens, they can start new colonies somewhere else. This is one of the reasons they’re so difficult to remove from a house since they can spread quickly within your home and build multiple colonies.

Pharoah ants take about 38 days to become adults. However, their females can astonishingly live as long as one year, while their worker ants only get nine or ten weeks to live; as for the male pharaohs that mate, the multiple queens only live for about four weeks after mating.

Mainly, pharaoh ants feed sugary foods like honey, soft drinks, jellies, sugar, and fruit juices. They also like fatty foods like bacon and peanut butter. Unfortunately for homeowners, pharaoh ants can eat nearly anything when their beloved food isn’t available. That’s why keeping your sugar inside a cabinet won’t help you prevent infestations. They can even eat other dead insects.

Lucky for you, pharaoh ants don’t bite because of how small they are. However, they may impose other health risks on humans. For instance, if they infest a hospital, they might transmit a dozen pathogens like Clostridium, Salmonella, Streptococcus, or Staphylococcus.

As a result, pharaoh ant infestations are pretty problematic and require immediate ant control when they occur in health care facilities. However, homeowners shouldn’t worry since disease transmissions rarely happen in houses.

Unlike many other insects, ants don’t leave obvious infestation signs behind them. For example, you won’t see wood shavings or shed wings like you would with a termite infestation. Instead, you’ll see the tiny worker ants trailing from place to place to get food and return to their nest. Since pharaoh ants mostly love sweet foods, you may find them around juice and soft drink spills.

Since controlling pharaoh ants is increasingly challenging, you should contact professional pest control whenever you suspect you have an infestation. But despite that, if you see a couple of very tiny ants hanging around or a lost pharaoh ant worker on your counter, there’s probably nothing to worry about.

To get rid of pharaoh ant colonies inside your house, you should consider baiting. Unfortunately, like many other ant species, spray causes pharaoh ants to split into multiple small colonies and spread around your home. This will only make matters worse, so you should be careful. If you still prefer spraying ants, we recommend using a non-repellent spray, especially if you haven’t found the nest.

The real challenge here is choosing an ant bait that’ll attract the sneaky pests. But don’t worry! We’ll help you. For starters, you should purchase sweet or protein-based baits. Then, when placing them, you should consider that pharaoh ants are persistent and might change locations quickly. As a result, you should set your baits smartly.

You should use slow-acting baits instead of quick ones as a rule of thumb. This is mainly because quick ones will kill pharaoh ants on the spot, and for the best results, we want their workers to take the baits back to the nests so that the whole colony can get poisoned.

If your bait remains untouched by worker ants, you should choose another one. Note that you shouldn’t leave any food around your baits. Remember, you want the pests to feed on them without getting distracted by anything else.

Another control technique is using insect growth regulators. Those regulators can be used as baits, and pharaoh ants should essentially take them back to their nests. But how does the regulator eliminate ants?

Well, it sterilizes the queen pharaoh ants and stops the production of new workers. This way, the colony will diminish over time. However, if you use this control method, you should be patient because it may take several months. That’s why you can’t use it in case of infestations in critical places like hospitals.

With that being said, we still recommend you contact professional pest control to control pharaoh ants instead of dealing with them yourself. They’ll know what to do exactly and will also offer you regular check-ups of your home.

Is A Pharaoh Ant The Same As A Sugar Ant?

A “sugar ant” is a generic term commonly used in the United States and Canada to refer to any ant that loves sugar. So pharaoh ants can be referred to as sugar ants along with many other types of ants.

Do Pharaoh Ants Have Wings?

Yes, pharaoh ants have winged males and winged virgin queens. However, they don’t fly. Moreover, when the virgin queens mate, they get rid of their wings.

No, pharaoh ants aren’t particularly destructive to properties and structures. However, they can transmit infectious diseases among humans; thus, they’re only harmful in terms of health.

Why Do I Have Pharaoh Ants?

Pharaoh ants can infest any place where food and moisture are available, houses included. Accordingly, it’s never wise to blame their infestations on hastily cleaned areas or leftovers on kitchen counters.

Pharaoh ants are a serious pest to deal with inside houses and healthcare facilities. They’re small, sneaky, and persistent. Moreover, they build large colonies and move from place to place in a swift fashion before you even realize they’re nesting comfortably inside your home. To control them, you can use ant baits or non-repellent sprays.

If you don’t want to deal with their nuisance though, you can contact a professional pest control company and leave the matter to them.