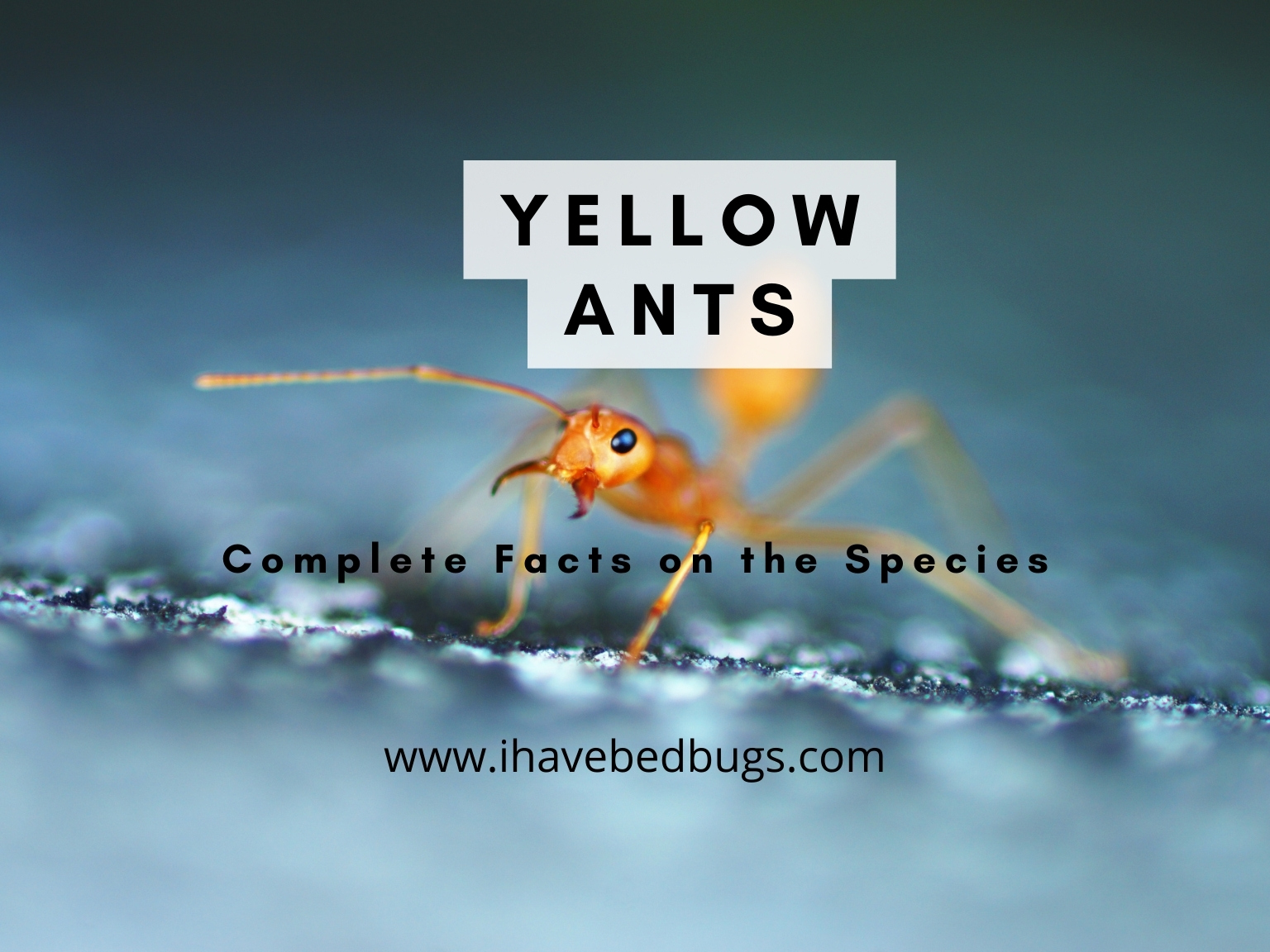 Have you ever stepped on an ant only to smell a sweet lemon odor afterward? Then, you’ve stepped on a yellow ant. This unique characteristic gained those ants their famous name, citronella.

Since those ants are prevalent all over the United States, you should know how to detect them and what to do if you have an infestation.

In this article, we’ll tell you everything you need to know about yellow ants, from their appearance and habitat to signs of their infestation and ways of prevention. So read on!

Characteristics Of A Yellow Ant

To identify a yellow ant, you need to learn more about its characteristics. So let’s have a look at them.

There are two yellow ant species, Lasius interjectus, and Lasius claviger, also known as the larger yellow ant and the smaller yellow ant, respectively. Other than the difference in their sizes, they look similar.

The worker ants of this species are pretty tiny with 5/32 inch bodies, while the queen and the swarmers measure about 5\16 inch. The swarmers, also known as the winged ants, can be distinguished from the other types by their greyish-brown wings. It’s also important to note that only the workers will emit a citronella odor when crushed.

Regarding body color, all types adorn light yellow and reddish-brown bodies. As for the body details, yellow ants have antennae with 12 segments. A single node connects their thoraxes and abdomens. If you look closely, you’ll notice they have many erect hairs on their heads.

Yellow ants are subterranean insects; they like building nests underground in moist soil. They commonly build their nests in fields, lawns, open woods, gardens, near house foundations, inside rotting logs, and under concrete slabs. The appearance of dirt mounds due to their digging activity often indicates the location of their nest.

Meanwhile, they build nests where moisture is widely available when they’re indoors. So, for example, you might find a nest under the bathroom tiles or inside moist crawl spaces. For that reason, a citronella ant infestation might indicate a moisture problem in your house.

As for their behavior, yellow ants are mainly nocturnal. That’s why your chance of spotting them is narrow. However, they often swarm in mid-summer days since they prefer humid and warm weather, specifically June and July. Although swarming citronella ants have been recorded in early spring and autumn, it was probably because of heated buildings and warm soil.

Citronella ants feed mainly on honeydew, a sweet material excreted by insects who suck on plant roots, like aphids and mealybugs. That said, spotting worker ant trails inside houses is rare since they don’t feed on human food like other ants.

Inside the yellow ants’ nest, the queen is responsible for producing workers and winged males and females. Those winged reproductives are often called swarmers, and they leave the nest to mate. After mating, the females shed their wings and form new colonies, while the males die soon after.

Signs Of A Yellow Ant Infestation

Since citronella ants have no stingers, they’re harmless to humans. However, they become a nuisance if they build a colony inside your house. So, you should know the warning infestation signs.

Citronella ants dig visible mounds in the soil near their nest openings. So if you spot a mound in your garden, you should contact a professional pest control company.

Another sign you should look for is swarming alates in your house. Their appearance indicates that there’s a colony near your place.

How To Prevent A Yellow Ant Infestation

Luckily, there are some measures you can carry out to prevent citronella ants from invading your house. To begin with, you can schedule regular pest control inspections with a professional. They’ll have more experience and will identify the ants in no time.

Then, you should check for moisture problems in your house constantly. This is because citronella ants mainly live inside decaying wood that has been damaged by water. It also wouldn’t harm to inspect the areas around your foundation walls and landscape timbers.

To be safe, you should store firewood piles away from your house. This won’t only prevent yellow ants but also all the wood-infesting types of ants.

Since yellow ants are pretty harmless, professionals often recommend that homeowners don’t disturb the ants’ nests. You might not even notice their presence for a long time, and they never attack food or structures.

That said, if winged ants enter your house and cause nuisance, you can use your vacuum cleaner to remove them. This non-intrusive method will effectively eliminate ants from your home. However, if you spot swarming ants more than once per year, you should start looking for the colony.

If you successfully find the mounds that ants dig over the colony, you should directly inject an insecticide inside the hole. However, not all insecticides are suitable for the general public. Therefore, it’s best to contact a pest control professional company because they have access to many equipment and pesticides.

Yellow ants are famous for the lemon verbena smell they emit when crushed. However, they’re among the harmless ant species, which means they cause nothing more than an inconvenience when inside houses. They don’t even crawl on household food. As a result, you should leave their nest undisturbed unless swarmers appear in your home.