Home » Cockroaches » German Cockroach: Everything You Need to Know 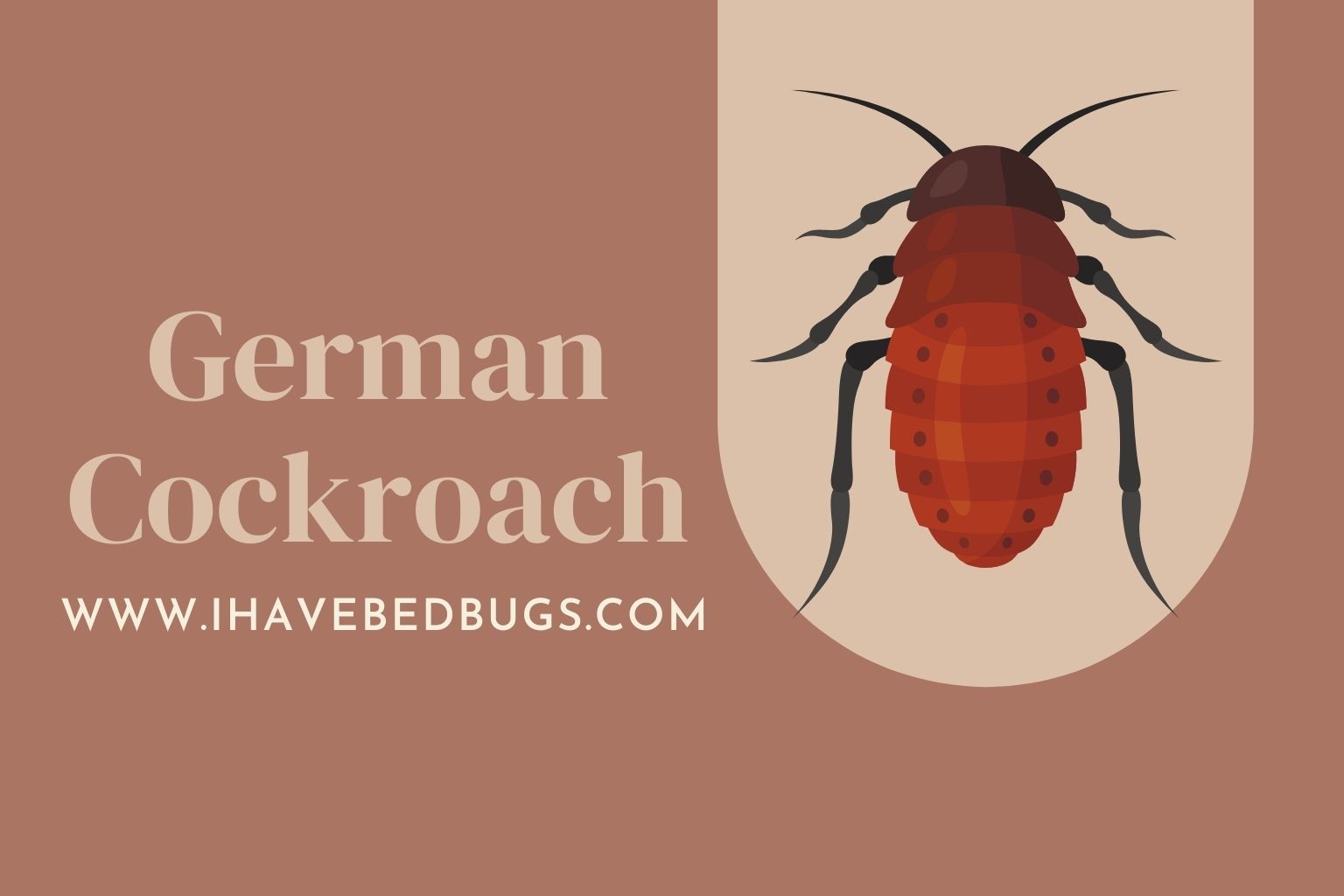 You’ve probably encountered a German cockroach if you’ve ever lived in a rental property or an apartment complex. The most prevalent cockroach species is the German cockroach (Blattella germanica), which can be found in human dwellings.

They aren’t needed to help decomposition waste and pathogenic organisms in homes. So instead, cockroaches might follow your rubbish to the dump after you’ve removed it from your home.

However, how can you know whether you have a German cockroaches infestation? What dangers do they represent to you and your loved ones? What can you do to avoid them? Read below to learn everything you need to know about Blattella Germanica.

How Can You Identify German Cockroaches?

German roaches, unlike American cockroaches, can vary in size based on their age and the amount of food they have access to. To help you identify the German cockroach (Blattella Germanica), below are some distinguishing features:

How Can You Tell if You Have German Cockroaches?

Cockroaches don’t favor cold temperatures. Instead, they prefer to reside in warm, humid environments near food and water sources. So, here are some indicators:

Where Can You Find German Cockroaches?

German roaches prefer to live in kitchens and bathrooms. They like to be near water and food sources.

Additionally, a vast population of German cockroaches emits a terrible odor. Unfortunately, the warmth of electrical appliances and wiring provides a haven for common cockroaches. Look for these roaches in the kitchen behind and under essential appliances and equipment.

Also, German cockroaches eat practically anything, especially leftover food in your sink and countertops. They’ll infest garbage cans and kitchen cabinets. Therefore, sanitation and eliminating food are the first step in their treatment.

And if the cockroach population grows large enough, the German roaches will spread to other house areas. Most of the time, these roaches are active at night since they’re nocturnal. And the presence of German cockroaches during the day is mainly owing to congestion in their hiding places or a lack of food and water.

German cockroaches enter homes for one of two reasons: warmth and food, which are all requirements that humans meet. But, like all other cockroaches, they’re drawn to many problems that we can avoid.

To illustrate, cockroaches love to congregate near food sources, sinks, or near your trash can. However, cockroaches will thrive in an environment with plenty of food and water. Aside from food, German cockroaches consume the following:

How To Keep German Cockroaches At Bay

One of the most effective control methods to prevent cockroaches is to keep the house clean, especially in areas with food debris, pet food, waste, or moisture. And it would be best if you cleaned up spills fast.

Also, use a vacuum cleaner, or sweep always. Dirty dishes shouldn’t be left on the tabletop or in the dishwasher. Finally, to avoid damp and musty corners, constantly clean and aerate the restrooms and laundry rooms.

As for food, especially starchy or sugary foods, including baking supplies, you should store it in sealed containers. And take garbage and lidded trash containers outside. Also, avoid papers and card boxes, as they’re ideal breeding places for roaches.

German cockroaches reproduce a lot of eggs after mating and develop rapidly. As a result, it’s more likely that there will be a large infestation, raising the risk of additional problems and allergies.

In densely populated places, researchers have highlighted a correlation between the existence of roaches and the likelihood of asthma. Additionally, the greater the number of cockroaches, the more food sources they’ll need to hunt. And that includes food residue on the skin and mucous discharges around the eyes, nose, and mouth.

As a result, having these German cockroaches in your home is quite dangerous. They have many viruses, bacteria, and parasites on their body and in their feces, which can cause diarrhea, dysentery, salmonella, and other serious health issues.

Also, allergies to cockroach feces, cast skins, and saliva are possible. In addition, rashes and respiratory problems are common symptoms, and people with asthma and children are more vulnerable to these issues.

What Is The Lifespan Of A German Cockroach?

Understanding the German cockroach life cycle and breeding patterns helps control them. This way, you’ll be able to detect cockroach eggs and take action before getting an extremely heavy infestation. Also, the entire life cycle of a German cockroach (Blattella Germanica) is divided into three stages:

Furthermore, the German cockroach’s average life cycle takes up 54 to 215 days, with temperature, food availability, and species strain differences all influencing how long it takes for an egg to mature. Not to mention, this cockroach breeds continuously, so multiple generations overlap at any given time.

In most German cockroaches, 20% of adults and 80% of nymphs make up the population. Because the female German Cockroaches carry the eggs within the typical egg case inside their bodies, the German cockroach has a greater chance of surviving than other species because they aren’t subject to environmental injury.

How Do You Get Rid Of A German Cockroach Infestation?

It isn’t easy to get rid of German cockroaches. However, controlling German cockroach infestations is possible by following the procedures below and using the proper formula and application timing. It’s also cost-effective and will make you feel accomplished.

1. Conduct An Inspection To Determine Level Of German Cockroach Pestilence

A thorough inspection should be the first step in a solid German cockroach control program. For example, since roaches are nocturnal insects, turning off the lights in the kitchen just before sleep is one way to evaluate the magnitude of a German cockroach (Blattella Germanica) crisis you’re dealing with.

2. Clean Up The Clutter And Sanitize

Now that you’ve estimated the extent of the roach population in your home, it’s essential to clean the area thoroughly and dispose of clutter. That’s because clutter provides many possible roach harborage locations, making the roach treatment process more difficult.

Moreover, you can use this as an opportunity to clean up the area and get rid of any garbage or waste. After all, the less stuff you have in the vicinity when dealing with roach control, the better. And clean and sanitize everything that remains after de-cluttering. This includes all surfaces, such as floors, boxes, cracks, crevices, appliances, walls, inside drawers and cabinets, and grocery bags.

While knowing the extent of German Cockroach populations might be crucial in devising a strategy for roach control, traps take things to the next level. Professional exterminators refer to these devices as insect monitors rather than traps, which better explains how they’re employed. And we’ll cover some reasons you might wish to use them.

To begin with, they do kill roaches, usually within hours of setting them down. They don’t eradicate German cockroaches populations like the products we list below, but they do assist in minimizing them, especially in the first stages.

Sticky traps, however, remove the guesswork out of your inspection. For example, you won’t have to rely on indicators of activity from months ago. Instead, you’ll know exactly where all the hot spots are and where the worst infestation is.

To employ stick traps in this phase, repeat step 1, but place sticky traps while taking notes. Then, you mark each trap with its location in a few days, chalk the surrounding area, and collect all of your traps. Afterward, you count the cockroaches in the trap, make a list of the places with the most activity, and know just where to strike.

Now that you know how to monitor the cockroach population and adopt some basic sanitation techniques, you can get rid of German cockroaches.

The German cockroach sprays come in various insect growth regulators. Residual and contact sprays act as an insect growth regulators. A contact spray is intended to be sprayed directly on the cockroach. And a residual spray is designed to be used on various surfaces throughout the house, including kitchen cabinets. For the best effects, you should reapply it every three months.

Many of the best German cockroach killers on the market now are bait stations, which come in two types of baits. One is a roach poison bait station made out of plastic housing. What happens is that the roaches try to reclaim the poisoned food causing them food poisoning and death.

Moving on, the second option is gel bait, and gel baits come in tubes that are squeezed out in the cockroaches’ routes. Also, insecticide dust is similar to gel baits, though powdered. This solution is also used in high-traffic locations to trap as many roaches as possible.

Furthermore, German cockroaches are probably best treated with traps because those traps have a unique fragrance to attract roaches. In addition, they glue them together in the trap making German cockroach survival difficult.

In addition, pesticides come in a variety of formulations for different applications. For example, boric acid is a popular ingredient in several over-the-counter German cockroach products. And it’s available in various forms, including dust, gel bait, granule bait, and aerosol spray. Each of these formulas is an insect growth regulator and has a specific application in a particular field.

Last but not least, when German cockroaches are everywhere, the only way to keep them under control is to use the correct insecticide formulae in the right places. Spraying cardboard boxes and cabinets, as previously said, won’t control them and may be completely worthless.

As for exterminators, utilize various chemical control and don’t rely on a single formula to keep pests at bay.

The German cockroach (Blattella Germanica) is the most popular cockroach species in the United States, but it can also be found in other parts of the world. Unfortunately, it’s also a dangerous bug that spread intestinal diseases like Salmonella, Typhus, E.coli, and severe allergic reactions.

So, take steps now to prevent German cockroaches and avoid a future problem that could be costly. Also, the best way to diagnose the problem and implement a cockroach control plan is to hire a pest control professional.

After all, allowing extremely heavy infestations to infiltrate your personal space isn’t a good idea. So, take precautions now to keep your home pest-free in the future.