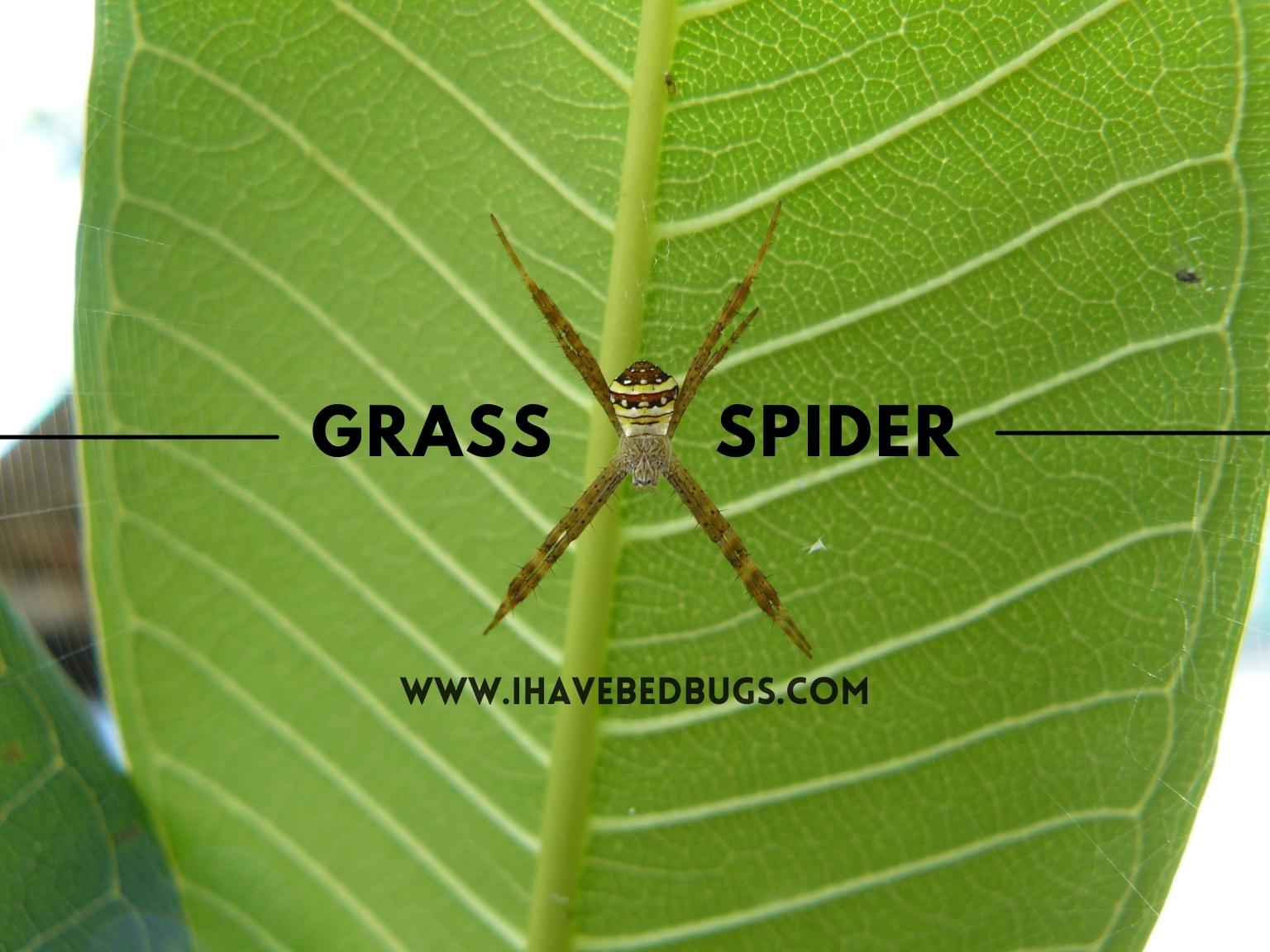 The spiders go by the scientific name Agelenopsis spp., hang out in the grass, and spin webs that look like funnels. Agelenopsis sp. is one of the most interesting spiders but can sometimes be mistaken for other spiders like wolf spiders or hobo spiders.

With this Agelenopsis guide, you’ll learn how to identify an American grass spider. Additionally, we cover everything about the spider species starting with its geographical distribution and physical characteristic, covering topics like behavior and life cycle, and finishing off with the ins and outs of this species’ infestations.

So, without further ado, let’s delve straight in.

The American grass spider can often be found in the Western United States, North America, and Canada.

The grass spider species exhibits sexual dimorphism, meaning the males and females of the species have different characteristics. Female grass spiders are often larger in size than their male counterparts, with 10-20 mm and 9-18 mm in body length, respectively.

Both spider genders have two dark bands running lengthwise on their yellowish-brown to brown carapace. Additionally, a thin line runs on both sides of the carapace. The abdomens of this arachnid species are often darker than their carapaces, with a lighter median band lying across.

Grass spiders have super elongated spinnerets and distinctive dorsal markings on their abdomens and carapaces. As for their long legs, they are often ring-shaped and darker towards the ends. Like all members of the arachnids class, adult grass spiders have eight legs.

Depending on its species, a spider can have six or eight eyes regarding the grass spider eyes.

How To Identify Grass Spiders?

Grass Spiders can be easily identified by their funnel webs. The grass spider’s web works as a great identifier because they’re often confused with domestic house spiders, wolf spiders, and hobo spiders.

Like other members of the Agelenidae family, these spiders are famous for their funnel-weaving abilities. Grass spiders spin non-sticky sheet webs near the ground to trap their prey. These large, funnel-shaped webs are flat and have a funnel or tunnel located to one side of the structure.

Viewed from the top, these structures resemble a black hole. This is because the webs are mostly horizontal and somewhat concave.

A grass spider’s funnel-web is more popular than the spider itself and can be found on weeds, grass, bushes, ground covers, fence rows, building crevices, and brush piles. The species uses its web to both catch prey and hide from potential threats. As a result, the likelihood of sighting the web greatly beats that of spotting the spider itself.

These webs are often clearly visible after dew or rain, where the silk traps water droplets that in turn reflect light. Moreover, the fine web tends to collect debris, leaves, and twigs from its surrounding.

Both grass spiders and wolf spiders have a similar cephalothorax pattern but exhibit clear differences in the abdomen region.

While a grass spider’s abdomen is covered in chevrons and may begin with an extension of dark lines, the abdomen of a wolf spider lacks the chevrons and has a bold black line down the middle.

Unlike grass spiders, wolf spiders live in burrows and don’t spin webs. Thus, you should automatically eliminate any wolf spider suspicion if you see a funnel-web.

Grass spiders are shy, fast spiders. These spiders often hang out in the grass and wait for the prey to come to them. Once a prey is spotted, the spider rushes swiftly to paralyze it and drag it back to the web’s funnel. Additionally, wandering insects can get trapped in the spiders’ intricate web.

Despite being non-sticky, grass spider webs are quite hard to escape. Once a prey gets trapped inside, the spider will rush over to bite it with its venom-bearing fangs.

When the temperature starts to drop around autumn, the spiders can be spotted indoors. Interestingly enough, grass spiders are relatively harmless and don’t seek interaction with humans.

The defense mechanism of a grass spider can be divided into two parts: evasion and defense. Grass spiders are timid creatures by nature; they don’t seek trouble. Often, you’ll find an American grass spider hiding in its web, awaiting its prey. The structure of the web makes it a great hiding spot for the grass spider.

If attacked, ground spiders bite in defense. They have venom-bearing fangs that they use to paralyze prey and attack predators. The most common threats for a grass spider include lizards, birds, and centipedes. Additionally, if a spider feels threatened by a human, the spider will bite.

Are Grass Spiders Poisonous To Humans?

Grass spiders have small, venomous fangs that they use to subdue their prey. Because said fangs are very small, they rarely penetrate human skin. However, children and seniors usually have thin skin, which makes them more susceptible to fang breakthroughs.

When threatened, grass spiders bite humans. If for any reason, a grass spider’s fangs were able to penetrate human skin, the spider venom would seep through. The venom is not poisonous but can, in rare cases, cause bacterial infections and necrotic skin lesions. Additional more common symptoms of grass spider bites may include swelling, redness, pain, and itching.

To sum up, grass spiders are venomous but not poisonous to humans.

American grass spider eggs hatch in spring. These hatchlings then spread around to create their own, separate nests. As the spiders grow in size, so do their small webs.

Subsequently, the spiderlings undergo multiple shedding cycles to become mature and fertile. Shedding, also known as molting or sloughing, is the biological process of discarding the outer shell or covering to form a new one.

Grass spiders like living outdoors. These spiders have a crucial role in the balance of nature, eating away pests and harmful insects. This species is quite desirable in nature but can cause a bit of a dilemma in more human settings.

While one or two spiders may be desirable in your garden, it might not be the case as their numbers increase. Despite preferring grass and the outdoors, grass spiders can sometimes make their way inside as well.

Should You Get Rid Of Grass Spiders?

Before you look for ways to get rid of grass spiders, you first need to decide whether you want to. As mentioned above, grass spiders feed on undesired pests. So, in a way, you can view these spiders as natural pest control. Additionally, grass spiders pose no real threat to humans.

If you spot the characteristic funnel web in your garden, it can be a good idea to leave it there unless the sight bothers you. On the other hand, if the spiders are found in large quantities or indoors, you may want to take action.

What Threats Can A Funnel Web Spider Pose?

The two possible inconveniences of a grass spider are the bite and the web. Despite being non-poisonous, a grass spider bite can be a major concern if you have children around.

Additionally, their unsightly webs pose absolutely no threat, but the idea and appearance of a spider web isn’t something we humans like to exist around. The webs also collect debris, leaves, and twigs, which can make a very well-kept garden look shabby. Dirty spider webs in a clean home is a whole other story.

If you suspect an infestation, there are three signs to look for: webs, eggs, and molted skin. Spotting one or two of the characteristic grass spider webs is normal, but finding multiple webs is often a sign of infestation. Additionally, you may come across the spiders’ white egg sacs, especially in corners, crawl spaces, and attics.

Finally, look for cast skins. As we discussed earlier, grass spider hatchlings need to go through a series of shedding cycles before they mature. After every molting cycle, the cast-off skins are often left lying around. Therefore, cast-off spider skins indicate an infestation.

How Does A Grass Spider Make Its Way Into Your Home?

A ground spider prefers the outdoors. The most popular cases where the spider may seek the indoors are insect infestations and weather protection. If the weather gets too cold, the spiders may seek your home for shelter. Moreover, insects in your house may attract grass spiders.

A male grass spider is quite adventurous by nature, and it may accidentally find itself in your place. However, wandering male spiders usually find their way out and don’t often cause infestations.

There are several methods for the spiders to gain access to your home. Because these arachnids are fast and agile, humans can sometimes carry them into their homes without realizing it. Additionally, the spiders can climb through cracks, gaps, broken vents, and torn screens.

How To Get Rid Of Grass Spiders?

A dirty environment may look like food crumbs lying around, unwashed dishes, sticky residue left behind sugary drinks, and unsealed garbage cans. If you leave pet food lying around, this could also attract grass spiders. Moreover, the more insects you have in your garden, the higher the incidence of ground spiders. Consequently, the more spiders there are in your garden, the higher the risk of them getting into your space.

To prevent the spiders from infesting your place, you need to exhaust any possibility of pests finding their way to it.

Such measures can include:

Additionally, reassess your lighting. Lights attract other insects, and having lighting units near doors and windows will double the damage; windows and doors are access points to the inside. Luckily, sodium vapor lights and yellow bulbs are less attractive to insects, so it may be a good idea to replace yours with these. Moreover, make sure your lights are placed away from the aforementioned entry points.

If you start noticing grass spiders over your property, the above measures can also help discourage spiders from growing their population. In addition, you should also remove any webs you find.

The best way to treat a grass spider infestation in your home is to both treat the underlying insect infestation and get rid of the grass spiders in your lawn if you have one. In severe infestation cases, chemical control is most effective, and it’s best done by professionals.

Diatomaceous earth is a non-toxic, naturally occurring sedimentary rock that is formed from the fossils of aquatic animals. This rock can be ground to form a white powder with proven efficacy against ground spiders.

Furthermore, peppermint and chestnut essential oils have proven somewhat efficient in warding off spiders. Therefore, spraying your lawn with a water-oil mixture may do the job for you.

Pesticides should always be the last resort. In addition to killing pollinators and other beneficial insects, pesticides can also cause harm to humans and pets. So, unless the spiders are causing real damage, it’s always best to avoid pesticides.

Pesticides containing diazinon, allethrin, resmethrin, or pyrethrin are often the ones effective against this spider species.

It’s always a smart idea to contact professionals to control insects in large-scale grass spider infestations or if you don’t want to go through the process yourself. The professional approach often entails an initial inspection and assessment followed by an elaborate, customized treatment plan.

To sum it all up, Agelenopsis sp. is a spider genus with many species known for spinning a characteristic funnel-looking web. This web is super intricate and can be used both to hide and trap prey, mostly small insects.

A ground spider is agile, shy, and will not seek humans or bite them unless it feels threatened. Its bite, nevertheless, is not poisonous to humans.

These spiders play an important role in nature by feeding on other insects, but they could become a problem depending on how many grass spiders there are on your property. However, control measures are available to get rid of them.