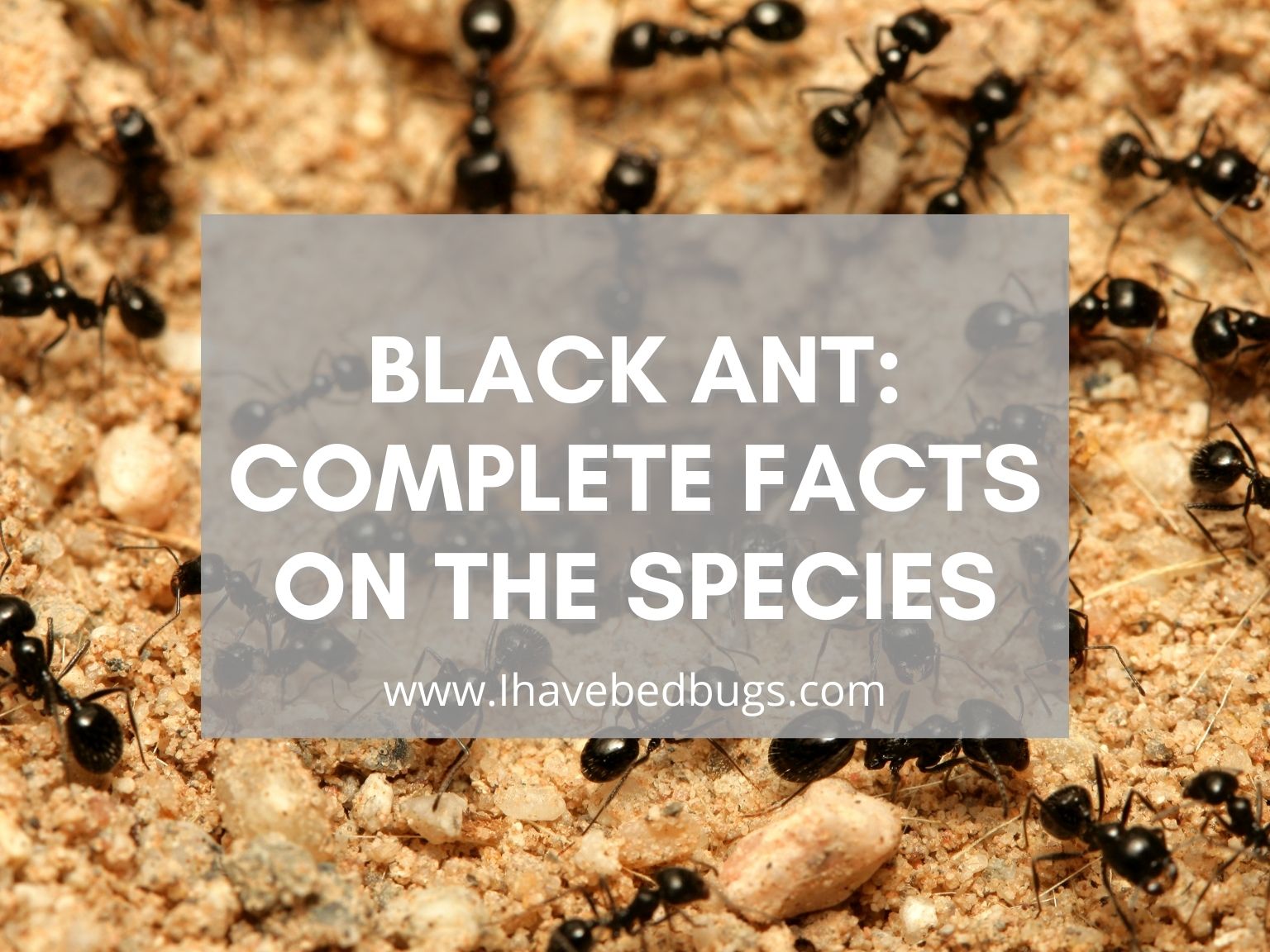 If you live in the United States, there’s a high chance you’ve come across little black ants (Monomorium minimum) before. They usually move in foraging trails next to pavements and rocks. And while they’re dark brown and jet black like many other ant types, they have a noticeable shine that you can use to distinguish them.

In this article, we’ll be discussing complete facts about these black ants, from their appearance and habitat to their diet and reproduction. We’ll also walk through signs of their infestation and ways of prevention. So, let’s dive right in!

Black ants are pretty small insects. The workers of this type are 1/16 inch in length with dark brown and jet black bodies. However, their queens are larger, with nearly 1/8 inch bodies. As for the body details, the ant has a two-segmented pedicel, also known as an ant waist, with no spine, and its thorax is uneven in shape.

If you look closely at a black ant, you’ll notice that its body is gleaming a little. You can also distinguish it by the antenna as it has 12 prominent segments and ends with a segmented club.

You can most commonly see little black ants in protected areas where wood is widely available. This is because they like nesting in decaying trees and rotting logs. You might also detect them if you have fine soil in your backyard. Meanwhile, they build nests in wall voids and hide between walls and carpets when they’re indoors.

Also, they like dark areas that are protected from outside dangers. If you look at any pavement while you’re walking, you might see foraging trails of workers. Those trailing ants look for a food source along foundation walls and sidewalks.

Don’t be tricked by those ants’ small bodies; they can be aggressive while fighting for food. They can even fight larger species that have aphids regularly in their colony. Aphids produce a sweet material called honeydew, which is ants’ favorite food.

That said, little black ants are omnivores; therefore, they can feed on seeds, plant secretions, meats, oily foods, and even dead insects to survive.

Little black ants form medium to large colonies, and they often have more than one queen laying the eggs. Queens survive for one year, and the eggs mature in 30 days.

In addition, you have a high chance of spotting winged workers in summer, specifically June and August, since this is their mating season. After they mate, the ants drop their wings, and the males don’t live for too long.

Although little black ants mostly live outdoors, they might enter your house looking for food. If you have improper food storage or many dirty dishes, you’ll find them in trails in your kitchen. They also like moist areas so that they can get water. That’s why you might spot them in your bathroom around sinks and counters.

While seeing those insects in your house doesn’t necessarily mean you have a little black ant infestation, it sure means that there’s one nearby. And since they often have two or more queens, their colonies can live for a long time.

The good news is that you don’t need to worry too much about this because black ants are harmless. They have stingers, but they’re too small to bite you or cause you any pain. So the only inconvenience you’ll deal with is them crawling over your food.

To detect an infestation, you should look closely at those areas. Unlike other insects, ants don’t leave many signs behind them, such as shed wings and wood shavings. So if you find the ants crawling, you should immediately contact pest control.

Little black ants are common throughout the United States, southern Canada, and Mexico. They specifically like urban and industrial surroundings. So if you live in any of those places, you should schedule regular inspections with a professional pest control company. They’ll give you a smart preventative plan so that you rest assured that your house is clear of an ant invasion.

However, we’ll tell you a few things you should take care of as an extra precaution. First, you should seal gaps and cracks in your house’s exterior walls. This is because ants usually trail through wall voids into your home to get food. Second, make sure that you don’t store any firewood near your place. If you have any decaying wood, you might get an ant problem.

How To Get Rid Of Little Black Ants

Although it’s better to get a professional pest control company, we’ll tell you about two methods you can try to get rid of those ants. The one that we recommend is using ant baits. When you put bait stations out, the worker ants carry the poisoned food back to the nest. Typically, the rest of the ants will feed on it, and you’ll be able to eliminate the entire colony.

Another method you can try is spraying the ants you see. However, this isn’t the best solution because the spray doesn’t reach the colony. Instead, it only kills the few ants spotted in your house.

Little black ants, also known as Monomorium minimum, commonly live in large populations where water and food sources are available. Luckily, they’re pretty harmless and won’t reflect pain on you in case of a sting. However, it’d be best if you regularly inspected your place for infestation signs because black ants are a headache to deal with.