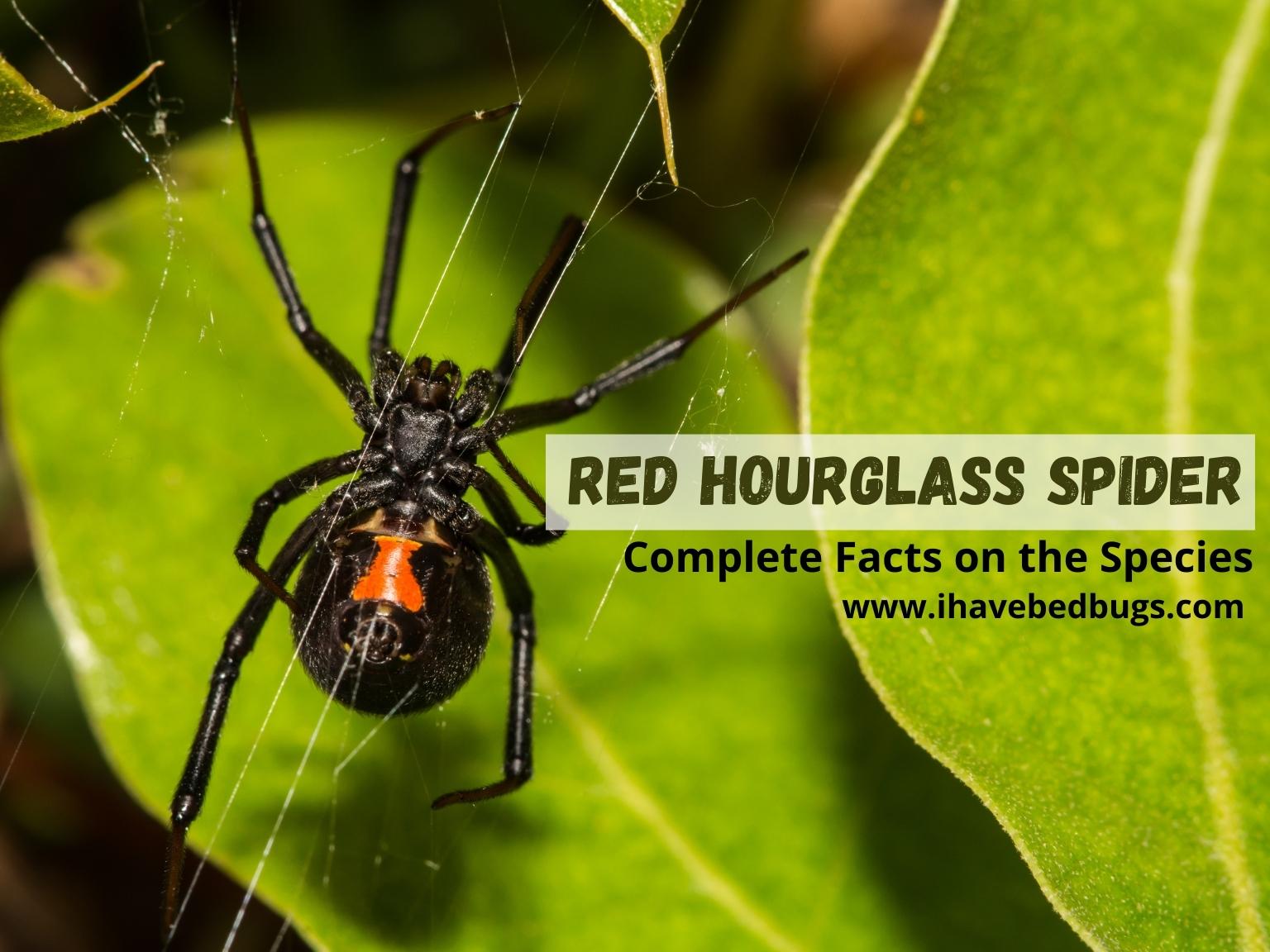 Spiders are present all over the world, and they play an important part in our ecosystem. As such, they’re absolutely invaluable; however, some species pose some dangers to us, humans.

So, if you’ve recently come across a spider with a red hourglass marking on its abdomen and you’d like to know what species this spider is, then you’ve come to the right place. We’ll tell you all you need to know about this creepy-crawler, from what it looks like to what dangers it poses to our health, as well as how to rid your property of it.

So, let’s get started, shall we?

Spiders with an hourglass marking belong to the genus Latrodectus of the Theridiidae family. This genus has a wide distribution and has 34 different species, the most famous of which are the black widow spiders.

As you can see, except for Antarctica, these spiders are present worldwide, and they’re present in both rural and urban areas. What makes these spiders notorious is their venomous bite and cannibalistic behavior. The second trait is why spiders of the Latrodectus genus were named widow spiders, as the female spiders showed instances of eating the males after mating.

Nevertheless, not all females exhibit this cannibalistic behavior, and they only eat their mates if they’re extremely hungry or to give their offspring a fighting chance. That being so, male spiders stay away from hungry females to preserve their lives, and they do by sensing certain chemicals present in the female’s web.

Now, considering the diversity of this genus, there’s bound to be a great variation in the size and appearance of its members. However, the female widow spiders generally tend to have a shiny, black body, though some can be dark brown, tan, or even red.

Of course, many have the characteristic red hourglass marking on the underside of the abdomen. But again, some have a vivid orange hourglass, some have a pair of red spots, and some have no marks at all. Similarly, the markings on the dorsal side of their abdomen can be white, brown, or faint red, depending on each spider’s species.

However, if you’ve seen a spider exhibiting a bright red hourglass marking in your home, then you’ve most probably come across the black widow species.

The adult female black widow spiders are the ones that typically exhibit the characteristic red hourglass, which is thought to serve as a warning sign. Some species even have white stripes on the side of their abdomen and red spots on their back.

Furthermore, males are usually gray or brown rather than black, and if they have an hourglass marking, it’s usually yellow or white. However, they can exhibit red and white stripes on the side of their abdomen.

As they mature, the female black widow spiders start laying their eggs, which are enveloped within an egg sac. This egg sac has a smooth surface texture and can be round or pointed. Color-wise, they can range from white to tan.

They then take a central position within those messy webs and hang upside down, lying in wait until a prey mistakenly enters their web. Since black widows have poor eyesight like most other widow spiders, they mostly rely on the vibrations that go throughout their web when a prey makes its way into it.

Once it does, they pounce on it and cover it in a layer of fibers. They then inject digestive secretions onto the prey, which liquefies it, allowing them to feed by sucking up the resultant sludge.

You should note that you’ll only find one female per web, as black widow spiders are solitary creatures and don’t share food with others. However, it’s not uncommon to see several webs in the same vicinity, which is then considered a full-on infestation.

Where Can You Find Black Widow Spiders?

Customarily, you’ll find black widow spider webs located in dark, secluded places so that they can remain hidden and protected. These places are usually in buildings; however, they can also be in other structures such as tree branches, tires, or even furniture. As such, look for their webs under eaves, behind desks, in empty containers, mailboxes, or cluttered corners of your garage.

Also, try looking under yard furniture or any woodpiles you have hanging around your yard. Additionally, check your car for any sign of black widow spiders, be it an egg sac, web, or the iconic female black spider itself.

How To Differentiate Between Black Widow Spiders And Similar Spider Species?

As distinctive as a black widow spider is, it can be confused with other widow spiders, particularly the brown widow spider (Latrodectus geometricus). Though these spiders are usually brown, they can have a dark brown or almost black body.

However, if you look closely, you can find several differences between the two species.

First off, unlike black widow spiders, the abdomen of brown widows isn’t shiny or reflective, and if you look close enough, you’ll notice a faint trace of brown pigments.

If you come to look at the males of the black and brown widows, they have much of the same appearance. However, the male brown widow spiders are slightly smaller, especially when compared to their females.

Finally, the simplest way to differentiate between the black and brown widow spiders is to look at their egg sacs.

Typically, brown widows produce an egg sac that appears spiky or fuzzy. This is due to the numerous pointed projections present on its surface. Moreover, this spiky egg sac is normally round and yellow. Alternatively, a black widow spider egg case is much smoother and can be pointed or round.

Other than the brown recluse, black widow species are sometimes mistaken with members of the Steatoda genus. Spiders of this genus are called false widow spiders due to their closer resemblance to the Latrodectus spiders. However, you can readily identify them by their abdominal cream markings and brown-orange body.

Contrary to popular beliefs, spiders aren’t all that bad or dangerous. In fact, they tend to stay away from humans, and if approached, they escape from their webs and scatter away. However, did you know that spiders, black widows included, are actually beneficial? They rid us of so many bothersome insects and pests and contribute to the ecosystem, but they don’t get any appreciation for it.

Nevertheless, black widows can be dangerous, especially the females, if they bite a human. This is due to the venom that they produce and release into their bites, called latrotoxin.

Now, while black widows generally scatter away when they encounter a large opponent, they can mistake a finger thrust into their web as prey and consequently bite it. They also do this if they feel cornered or startled, where their bite will serve as a last resort of some sort.

As severe as these symptoms sound, they rarely cause long-lasting damage, and they’re almost never fatal. The only recorded cases of fatalities were mostly caused by the European/Mediterranean black widows bites, and they mostly occurred in children. Typically, the symptoms last less than a week, but they persist for a few weeks in some instances.

However, the more commonly found northern black widow, southern black widow, and western black widow spiders aren’t lethal. The only case in which their bites can cause death is if an individual develops an anaphylactic reaction to the venom, which can happen if he’s been bitten more than once.

Still, you shouldn’t worry too much if the venomous spider has bitten you. You can go to a hospital to get an antivenom called antivenin, which will help with the pain. And if that antivenom isn’t available, pain medications and muscle relaxants will have a similar effect, and you’ll be good as new after a few days.

How To Prevent Black Widow Spiders From Infesting Your Home

Routinely cleaning your house and yard is the only way you can prevent black widows from making their way into your home. In addition, it’s of the utmost importance that you remove any clutter that’ll encourage the spiders to spin their webs and lay their eggs.

Similarly, it would help if you kept your yard prim and proper as tall grass presents an ideal hiding spot for black widows. Moreover, you should keep any debris lying in your yard, such as firewood or hollow logs, away from your house to remove any possible hiding spaces.

Finally, you should seal any cracks or holes that present entryways to the spiders, especially around the windows and doorways. If you can’t seal them, then fit them with weather stripping as a temporary measure until you can get them fixed or permanently sealed.

Note: If black widows once infested you, make sure to put on a pair of gloves and regularly clean and inspect any dark corners in your home to ensure that the spiders haven’t made their way back.

How To Get Rid Of Black Widow Spiders?

If you’ve got yourself a black widow infestation and you want to get rid of it, then you should start by cleaning and vacuuming every nook and cranny of your house. The vacuum will suck up any shiny black spider, egg sac, or web it encounters, leaving your house spider-free.

Just make sure to remove and properly dispose of the vacuum bag after you finish. The best way to do this is to place the vacuum bag in a sealed plastic bag. If you’re still seeing spiders after several vacuuming sessions, then you’ll need to use insecticides, be they in the form of dust or aerosols. Once black widows come in contact with these substances, they’ll die.

You can also contact pest control to help eliminate these spiders from your home.

Tip: A trick to discourage new spiders from making themselves at home is to apply some insecticide in places where the spiders had previously made their webs.

If you’ve encountered a shiny, black spider with a red hourglass marking, then you’ve come across a black widow spider. Unlike other widow species, only the black widows have the characteristic red hourglass mark on the underside of the abdomen, which makes them easily identifiable.

If you have a couple of black widow spiders in your house, make sure to thoroughly vacuum it and seal any cracks that the spiders can sneak in through. If this doesn’t do the trick, then apply some insecticides or call a pest control company and have it deal with the spiders.

Lastly, if a black widow spider has bitten you, head to the hospital and explain what happened. The doctors will know what to do, and any symptoms you have should subside in a week or so.