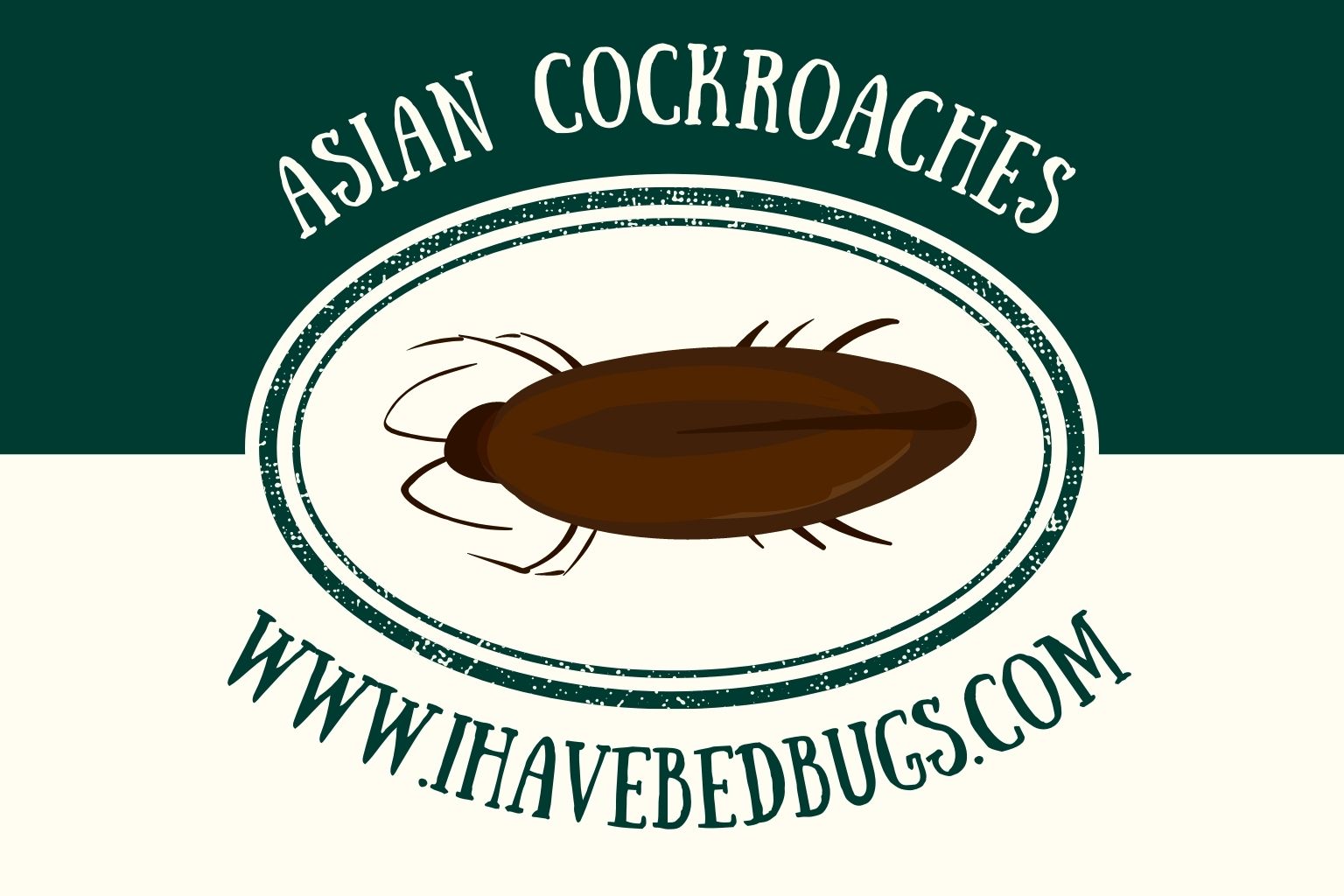 The Asian cockroach/Blattella asahinai is one of the many cockroach species you may come across as you live. Though American and German Cockroaches are more prevalent as indoor pests, Asian cockroaches can still infest homes and gardens. Therefore, we’ll tell you all you may need to know about this species to help you deal with them if the situation arises.

The Asian cockroach/Blattella asahinai is a breed of cockroaches that originated in Southeast Asia and was noted for its extreme resemblance to the German cockroach.

It was first discovered in 1981 among a group of insects collected from Okinawa Island, Japan, by Dr. Takayuki Mizukubo. Following this, the Asian cockroach spread to the United States, mostly likely through its presence within Japanese imports, and was discovered in Lakeland, Florida, in 1986 by a pest control company.

Since then, Asian cockroaches have continued to spread within Florida and have appeared in other southern states like Alabama, Texas, South Carolina, and Georgia.

Generally, adult Asian Cockroaches are described as having an almost identical appearance to their cousin, the German roaches. They have a tan or dark brown body measuring from 13 to 16 mm. Moreover, they have the same two parallel brown lines extending from behind their head and wings that mostly cover the lengths of their body.

Their nymph form is the same as their adult one, except smaller. When they first hatch from the eggs, they have a white color. However, after a short time, their skin hardens and turns into its final light brown color.

Like other cockroaches, the Asian cockroach goes through 3 stages; the egg stage, the nymph stage, and the adult stage. Asian cockroach females have the ability to lay an average of four egg cases (oothecae) before the completion of their life.

Habitat Preferences And Where To Find Asian Cockroaches

Generally, Asian cockroaches prefer the outdoors and are commonly found spending most of their time in damp, shaded, grassy areas that contain lots of grass, mulch, and fresh plant litter. This is primarily because plant debris is their primary source of nutrition, though they can eat other things as well. So, when they find a place where fresh plant litter accumulates, they settle into it and form hordes that completely take over the location.

Asian roaches love to roam the outdoors, preferring flying as their means of transportation, and they reach their peak activity levels at dusk. However, since they’re known for their attraction to the light, they tend to fly toward homes and other places with strong light sources at sundown.

Accordingly, if they manage to slip through a crack and enter your home, you’ll find them resting on TV screens, laptops, porch lights, lamps, etc. you can also find them attracted to trash, leftovers, dirty dishes, and mulch as they see these things as optimal food sources. Mulch, especially leaf litter, offers them another advantage in the cold months, where they like to burrow down into it for warmth and protection.

Asian cockroaches, like other cockroach species, are omnivorous creatures. That means they can survive on both animal and plant food sources. Accordingly, they’ve been observed feeding on honeydew, flowers, commercial crops, as well as certain fruits and vegetables like cabbage, lettuce, and strawberries. They can also eat pet food in addition to regular human food, including sweets, carbohydrates, and meats.

Since Asian cockroaches even eat the eggs of lepidopteran pests, some attempts have even been made to use them as a means of biological control for said pests. But, honestly, they can survive on any organic matter they find, such as paper, hair, and even decaying matter like mulch and leaf litter. Surprisingly, they have specific mulch preferences, where they prefer pine and oak leaf litter and tend to stay away from cypress, topsoil, and rubber mulch varieties.

While they both have wings, Asian roaches have longer and narrower wings that enable them to fly long distances quickly. Meanwhile, the wings of a German cockroach are non-functional, so they mostly remain tucked against its body, only fluttering occasionally with no effect.

As such, if you come across an Asian cockroach and startle it, it’ll fly away. However, a German cockroach will scurry away on its legs, especially when you turn on the lights.

The second difference is that Asian cockroaches are primarily outdoor creatures, only entering homes by chance or when specific tempting opportunities present themselves. On the other hand, German cockroach likes to live in indoor dwellings to access freshwater, food, and hiding places.

Now, while other differences do exist, you can’t really use them to differentiate between the two species by the naked eye. So, just stick to the flying and light attraction, and you’ll be able to tell between the two.

Since Asian cockroaches are slightly different from other species of cockroaches, their management and control will also differ. Unfortunately, residual sprays won’t kill Asian cockroaches as they’ll just fly past the area to which the pesticide was applied. Still, there are certain things you can do to take care of them and prevent their return.

How To Get Rid Of Asian Cockroaches

For one, you can try to manually trap Asian cockroaches in a net and then kill them. Look for them near light sources and then spring the net and spray them with a pesticide or crush them.

Though this method can be effective for the occasional flying pest, it’ll certainly be a nuisance if you have to catch upward of 5 or more cockroaches every day when Asian cockroaches have massively multiplied during spring and summer.

As such, for the larger numbers, it’s best to use pellet baits or pesticides. Pellet baits and granules containing fipronil or ß-cyfluthrin are best used for outdoor infestations in your garden or yard. Simply place them near the areas where cockroaches are most likely to be, and they’ll take care of most Asian roaches in less than a day.

Meanwhile, lowly-toxicity contact sprays such as those containing pyrethrin compounds are best for the indoors. Remember that you have to hit the Asian roaches directly with the spray, or else they won’t die. Still, if indoor insecticides prove to be ineffective, then scatter baits are another great way to take care of an indoor infestation. Nevertheless, if you don’t know how to safely and effectively get rid of an Asian cockroach infestation, make sure to call a pest control worker and have him deal with it.

The first thing you should do is make sure that the Asian roaches have no access to your home. This means that you must seal any cracks in your walls/floors and install screens on your doors and windows. This prevents any Asian cockroach from entering your home through open doors or windows, especially at periods of peak adult populations in spring and summer.

Additionally, try to keep your porch lights off when the sun goes down. You can also invest in some sodium vapor lamps and yellow incandescent bulbs, as these aren’t nearly as attractive to Asian cockroaches as regular lightbulbs.

Finally, make sure to maintain your garden and keep your house as clean and tidy as possible. This will drastically decrease your risk of getting an Asian cockroach infestation, both in and out.

Surprisingly, yes. Though it mostly happens in laboratories, the similarities between the two species allow them to mate and produce hybrid species that share their parent’s characteristics. Typically, the offspring can fly and have an insecticide resistance like the German roaches.

Do Asian Cockroaches Bite And Are They Harmful?

Asian cockroaches don’t need to bite humans and other animals to live, unlike other pests. Still, similar to other roach species, they can carry many outdoor pathogens from standing on trash and animal feces. They can then quickly transmit those disease-causing microorganisms to humans by standing on food, counters, or dishes. Moreover, they can cause allergic reactions to specific sensitive individuals.

An Asian cockroach differs from other species, though it has numerous similarities with the German roach. Thankfully, Asian cockroach management isn’t too difficult if you know what you’re doing. You can mostly get rid of Asian cockroaches by manually hunting them or using pellet baits. However, a pest control company will eliminate the problem if you have difficulty accomplishing the task.