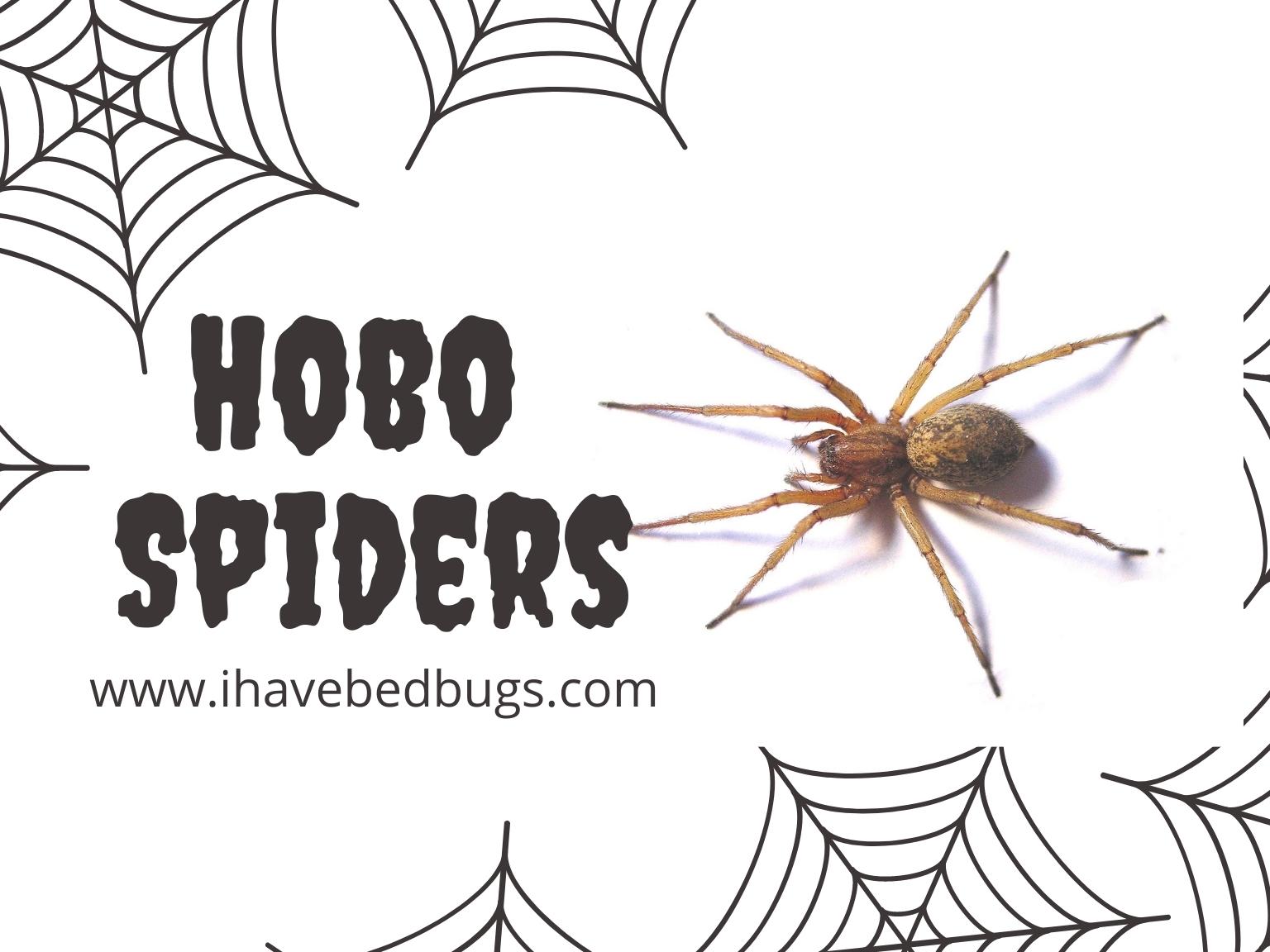 Since being introduced from Europe in the 1930s, hobo spiders have become one of the most common spiders in the Pacific Northwestern United States.

Many people refer to the hobo spider as an “aggressive house spider,” but this name is quite misleading as the spider is neither aggressive nor found commonly in homes.

In fact, the hobo spider is so-named because it’s commonly found around railroads, especially rail tracks. However, the spider is also found in all kinds of cracks and crevices.

Whether you’re a researcher, a curious reader, or even an arachnologist, this article will help you know these arachnids’ appearance, habits, and behavior. Ready? Let’s dig in.

What Are Hobo Spiders?

Hobo spiders, scientifically known as the Eratigena agrestis, belong to a family of spiders known as the funnel-web spiders. They get their name from their ability to build funnel or tube-shaped spaces to attract prey.

Below, we’ll walk through some key features of the Hobo spider.

It’s worth mentioning that you may need a microscope to get a detailed view of the hobo spider. It appears light to medium brown and has dark stripes on its belly. This gives it a similar appearance to wolf spiders and brown recluse spiders. Also, it has an oblong abdomen, and you can see its posterior spinnerets.

A hobo spider has eight distinct legs and can grow to about 40-50 mm in diameter, and the female species are often larger than the males.

A female hobo spider is about 11 to 14 mm long, and its abdomen is slightly larger than that of the male spider. Male spiders grow to just about 11 mm.

Hobo spiders have eight eyes that are clustered together. However, they have poor vision; they can’t see objects more than a few feet away.

Hobo spiders are mostly found in holes, beneath rocks, on woodpiles, in cracks, and around workspaces. They love humid environments and survive well in them. You’ll also find them in dark places like crawl spaces, basements, and garages.

As mentioned earlier, they’re often found along railroad tracks, and they like to make their home in holes and crevices in the tracks. Plus, they usually don’t live indoors, although they’re often referred to as aggressive house spiders.

Hobo spiders are well-known for their trait of displacing many native spiders as they spread. They can build funnel-like webs, which they use as nests and for trapping their prey. Funnel-shaped webs are webs that open at both ends, and one end expands into a broad, curved sheet. Some say it’s a sort of escape tunnel for the spiders.

These spiders are mostly not found above ground level. So, if they enter your home, you may find them lurking in the bathtub, on your stairs, in your closet, curtains, and even in your walls, especially the ones with high texture.

In addition, these spiders are fast. They can run at about 40 inches per second when they perceive danger.

Male hobo spiders search for their mates from June till October. In August and September, they intensify their search by digging deep into the ground each day.

The webs serve as a mating ground for the hobo spiders. While the males move around searching for their mates, the females relax in their webs, waiting to be found.

When the hobo spider lays its eggs in the fall, they’ll begin to hatch in the spring. A baby hobo spider is called a spiderling. The amount of eggs produced depends on the temperature and food available. Cold temperatures result in the production of little or no eggs at all.

Hobo spiders eat other insects and even other spiders. For example, when an insect comes close to its net, the hobo spider senses vibration and attacks its prey. It’ll then consume it at the narrow end of its web.

If a hobo spider feels threatened, it bites in defense. Unfortunately, this bite only causes mild pain and redness.

Because hobo spiders are confused with other types of spider species, several people assume that the hobo spider produces a venom that can be quite harmful to human health. However, there’s no evidence to prove that these spiders are a venomous species.

Male hobo spiders are known to bite more than females do. This is because they can wander around and go as deep as below the structure of the homes when they’re searching for a mate. It’s during this period that they get into contact with humans.

Female hobo spiders can attack the male and kill it if they feel threatened by its appearance. But they don’t kill the mate after mating; the male hobo spider dies on its own.

How Do You Know If You Have A Hobo Spider Bite?

Bites typically occur between July and September. That’s because males are looking for females to mate with. But how can you identify a hobo spider bite? Look out for these signs:

If you’re certain it’s a hobo bite, visit your doctor for further analysis.

Signs Of A Hobo Spider Infestation

Hobo spiders help take out insects, but an infestation can pose a huge problem.

So how do you know that there’s a hobo spider infestation in your home? We’ve outlined some of the signs to look out for. Let’s have a look.

How To Get Rid Of Hobo Spiders

Seeing hobo spiders is a call to action. This means that you have to get rid of them before they cause an infestation. This may not be easy because they’re very active at night, but it’s not a difficult task at all. We’ve outlined some steps for you to take:

In some cases, people mistake hobo spiders for wolf spiders because they look and behave similarly. So, let’s examine some noteworthy similarities and differences between them.

Hobo spiders and wolf spiders are hairy and brown with striped markings on their dorsal sides. Also, they both have eight eyes.

While hobo spiders create funnel-shaped webs, wolf spiders don’t. In addition, female hobo spiders lay the eggs in their sacs and then attach them to the web. However, wolf females carry the egg sac and attach it to their spinnerets.

Can You Keep A Hobo Spider As A Pet?

Hobo spiders don’t like to be kept in one place and restricted from moving around. Keeping a male hobo spider in your home may even be problematic for it when it’s time to search for a mate.

How Do Hobo Spiders Communicate?

Hobo spiders use senses such as sight and touch for communication. In addition, they have photoreceptors in their eyes that make vision possible. Before mating, the male attracts the female using specific receptors.

In addition, these spiders sense vibrations and chemical and air changes. Their hairs also help them to know when their prey is nearby.

How Far Can Hobo Spiders Move?

How Often Do Hobo Spiders Eat?

Hobo spiders are known for eating insects and even other spiders. They can eat as long as the insects are available.

How Long Can Hobo Spiders Live?

Hobo spiders can live up to a year. Some species, especially those in inland areas, can live for up to three years.

Hobo spiders can be beneficial, as they feed on insects and other spiders in the home. They’re also not harmful, as their bites only cause mild reactions.

In this article, we’ve discussed what hobo spiders are, their characteristics, behavior, and how they reproduce.

As you’ve seen, hobo spiders are neither aggressive nor commonly found in homes, although they’re called “aggressive house spiders.” However, when they enter homes, they might bite you. But don’t worry; hobo spider bites can cause mild redness, but they aren’t deadly.

So, if you have an infestation on your hands, your best bet is to get rid of it with the help of a pest control company.

In addition, if you like to keep spiders as pets, a hobo spider won’t be your go-to option because it prefers dark spaces and cracks. Instead, you can keep other species, such as fishing spiders and tarantulas.