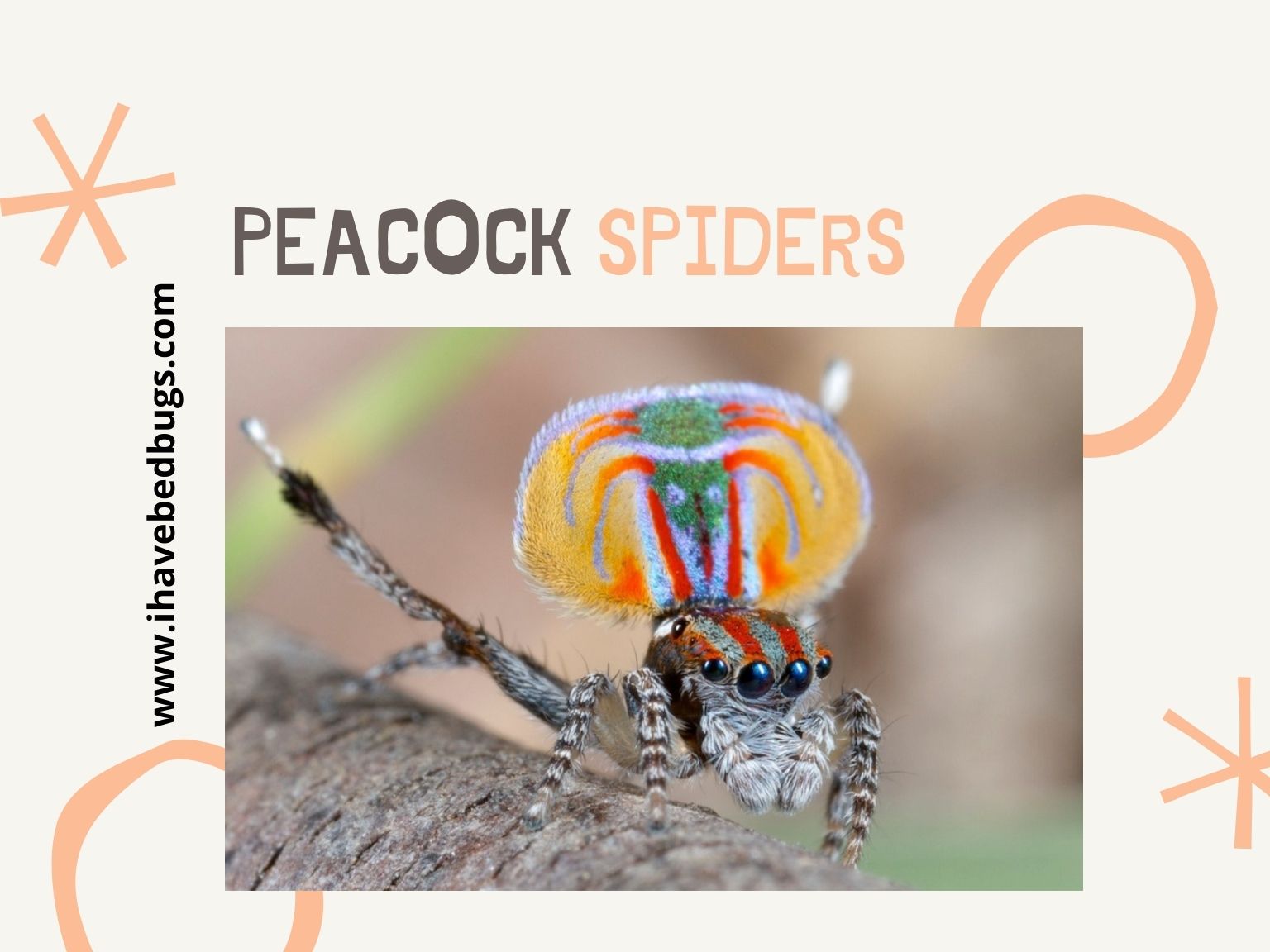 The iridescent, colorful appearance of peacock spiders gained them their famous name. But those qualities are limited to their males, while their females feature a camouflage appearance with brown and white scales. Most peacock spiders belong to the genus Maratus. And recently, there have been many discoveries of new species.

In this article, we’ll tell you everything you need to know about peacock spiders, including their appearance, diet, habitat, mating ritual, and more. So, without further ado, let’s jump right in!

Now, let’s get into more details about peacock spiders’ characteristics.

Male peacock spiders have vibrant bodies with many colors, including orange, cream, red, blue, and white. Those colors show because of the microscopic scales on their bodies’ surfaces, and they’re so iconic that they gained those spiders a proud stance in natural history books. However, they have white and black hind legs.

Meanwhile, females aren’t as colorful; instead, they’re plain brown with cryptic patterns over their backs and abdomens.

All peacock spiders have six to eight eyes. The central two convey information in high-quality colors and details. This is due to the spiders having spherical lenses, four-tiered retinas, and a mechanism responsible for internal focusing. As for the other eyes, they only translate movements and dark and light surroundings.

Interestingly, those spiders are tiny with bodies that resemble a grain of rice’s size. So to spot those features, you’ll have to look closely.

Peacock spiders live in many habitats. For example, you can find them in temperate coastal areas and semi-arid regions. That said, you’re most likely to spot them in Southern Australia, Western Australia, and China. Also, some peacock spider species live in only one type of habitat, while others can be found in many regions, including scrub forests, grasslands, deserts, savannas, and dunes, to name a few.

While a peacock spider has a fatal bite on smaller insects and spiders, it doesn’t pose any danger to humans.

Due to their solitary nature, those spiders don’t interact with humans much. When this rarely happens, they might bite a human by accident. However, their jaws are tiny, so they’re unable to bite through the skin.

Peacock spiders mainly feed on moths, grasshoppers, wasps, flies, winged ants, and smaller spiders. But, hauntingly enough, females might feed on male peacock spiders if they don’t like them.

In general, peacock spiders don’t build webs to catch prey; instead, they hunt them using their excellent vision, then pounce when their prey least expect it.

Their eyes let them see their prey from many yards away, so they jump on their enemies suddenly from a long distance and fatally bite them. The quality of jumping large lengths also helps them protect themselves against being caught by more giant insects.

It’s important to note that peacock spiders are solitary species until their mating seasons. This is when the male courtship rituals begin, and the spiders socialize.

Australian peacock spiders mate from August to December. The males get increasingly aggressive during this period and might do anything to win over a female peacock spider. They might even try winning over aloof or pregnant females. In extreme conditions, they might go after females from another species.

A male peacock spider attracts its female mate by standing on a high surface. Then, it waves its third pair of legs until it spots a female and produces vibrations. Females have strong sensory systems in their legs, which allow them to notice those vibrations and face the males.

Once this happens, the male unfolds the flat section of its abdomen, also known as the opisthosomal flap. When this flap moves, it resembles a peacock’s tail. Those elaborate courtship dances may take up to an hour till the female decides whether it wants to pursue the male or not.

If the females like the males, they’ll produce chemical pheromones from their abdomens. Males have chemoreceptors that can pick up those pheromones. This is when they know they’re agreed upon and ready to mate.

However, if the females are unimpressed by the males’ movements, they’ll show dislike by lifting their abdomen. They might even eat the poor male. This courtship led to scientists believing that peacock spiders undergo sexual selection.

Moreover, when the female spiders are pregnant, they create underground nests where they can lay eggs and guard them till they hatch. However, males and females don’t hatch at the same time. Males hatch in summer, and they can live till December. Meanwhile, females take longer to get out of their nests. Therefore, they also live longer than males.

Many spiders don’t see the full spectrum of light, and some of them only see ultraviolet light. However, all known peacock spiders can see all rainbow and UV-range colors. This is because they have fascinating visual systems with telephoto lenses, UV-sensitive photoreceptors, and tiered retinas. Those qualities gained them quite the fame among other spiders.

As for hearing, peacock spiders don’t have ears or eardrums. However, they’re excellent hearers because they use their hairy legs to sense vibrations in the ground and air. As astonishing as it is, they can hear sounds up to three meters away, which helps them expect predators.

A peacock spider can live for up to one year. After that, however, it takes quite a long time to grow up, and it only lives for a few months once it matures. So by the time those spiders are adults, they only live for a few more months. Their life cycle begins when the eggs hatch and the babies come out. They go through many molts after hatching, and they gain scales over their bodies as they grow.

Interestingly, when a spider goes through a molt, it becomes motionless and stops consuming food. Each one of those molting episodes can take a few several weeks to be over. During this period, it’s increasingly challenging to detect a peacock spider since it resides inside molts, and the molts are surrounded by sacs that get covered with dust and debris.

After their final molting episode, which usually takes time from September to November, the spiders gain their bright colors and fully grown genitalia. This is a sign that they can start mating. However, since males don’t live long after mating, you only have a chance of seeing them during the narrow window between molting and mating.

Luckily, you have a high chance of spotting females whenever because they stay alive to care for their eggs until they can feed themselves. Unfortunately, the mother spider and her babies leave the egg sac together after this happens. As a result, the babies spread away and lose their chance to see their mother again.

Peacock species are distributed among two genera, Saratus and Maratus. While Saratus only has one species, Maratus has many more. However, due to the difficulty of studying them, there are unknown species yet to be discovered.

Till 2013, there were less than 10 species known in Australia. However, scientists’ interest in the ever-colorful spiders led that number to rocket to an astonishing 92. Most of those reside in Southern Australia.

One exciting species that goes by Maratus constellatus is named that way because its abdomens’ markings resemble Van Gogh’s masterpiece, The Starry Night. The most recent addition to those species is Maratus nemo, which was discovered in 2021.

There are also two new species that we’ll talk about in more detail.

This species goes by the nickname Sparklemuffin because of the colored patterns on the spiders’ backs that look as bright as jewels.

It includes tiny spiders; males have 3/16 inch bodies, and females are nearly 1/4 inch long. The name jactatus means jolting in Latin, referring to males’ rapid movements during courtship. Interestingly, those spiders can jump very long jumps with lengths up to 40 or 50 times their size. They use this quality in hunting their prey and escaping from predators.

Naming a spider after a fictional character isn’t that common, but we got to see that day because of the distinctive white and black Skeletorus. This spider gained its name due to its resemblance to Skeletor, the character from Masters of the Universe.

It couldn’t look more different than other peacock spiders, as its body is only black and white, giving it a skeleton-like appearance. That’s why many people forget about it belonging to the Maratus species.

Skeletorus males often approach females in a hanging position, where they start their famous dance and rapidly move to grab the female’s attention.

The International Union for Conservation of Nature hasn’t yet assessed any species in the genus Maratus. However, scientists warn that those insects are greatly threatened by spider hunting and habitat destruction due to wildfires and controlled burns.

This is more so because of the unstable nature of the Australian continent, as it’s been subject to huge climate changes over the last few decades.

For example, a large fire in 2018 nearly wiped out the Maratus sarahae species, which led to the government of Western Australia declaring them critically endangered.

Peacock spiders are a fascinating spider species. Their males have characteristic colors on their backs to attract females. However, if the females are in a bad mood and don’t appreciate the flirting techniques, they might feed on the males for their peace of mind.

Now that you know enough about them, you can plan a trip to Australia to spot some peacock spiders! And remember that they’re harmless to humans, so don’t worry!