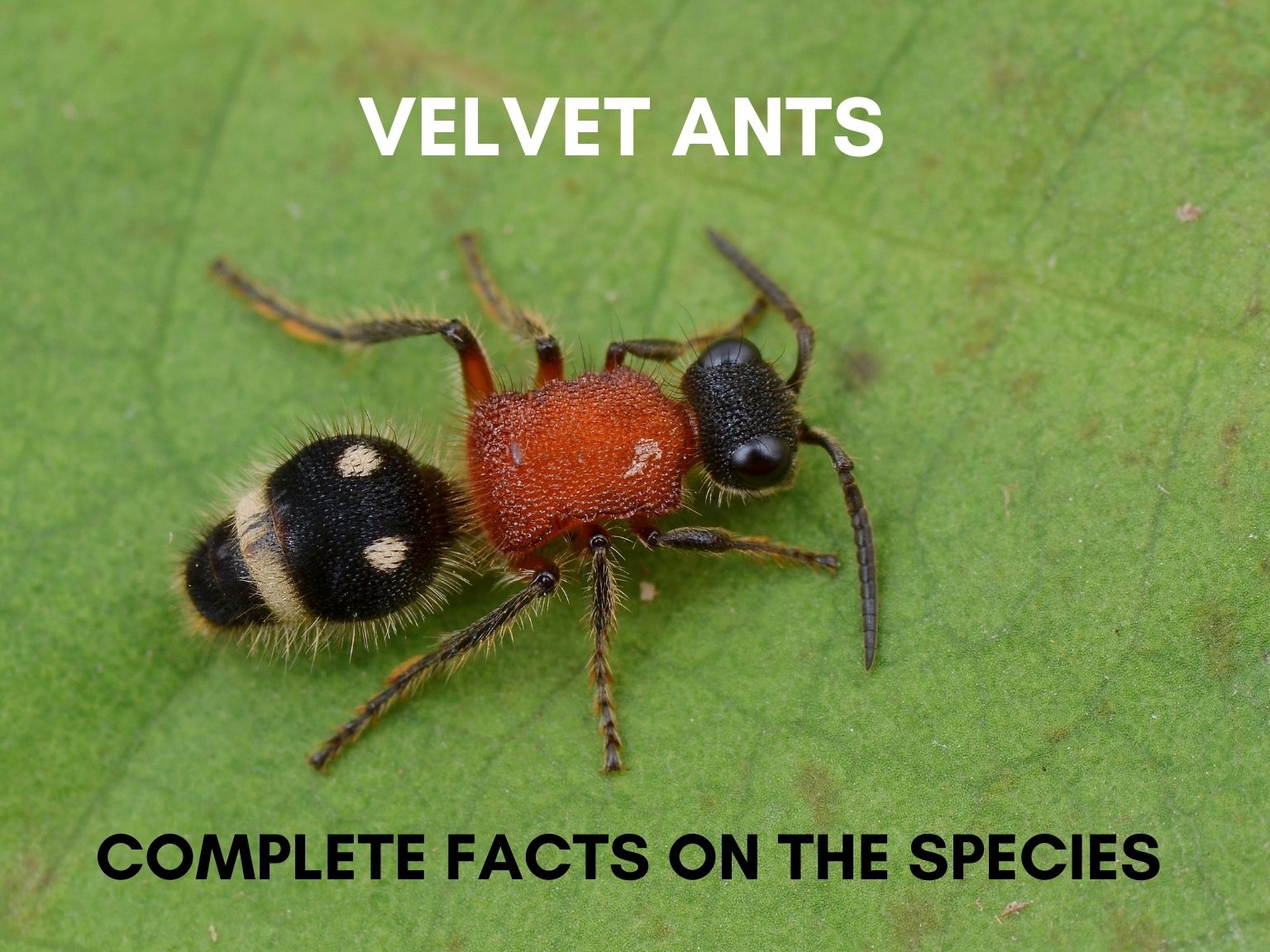 Although their males look like wasps, their females are hairy, wingless, and adorn bright colors. All those qualities contribute to the fact that they’re often mistaken for ants.

In this article, we’ll tell you all about their appearance, diet, habitat, and more. So, without further ado, let’s jump in!

Characteristics Of A Velvet Ant

Here are the characteristics you should know about to identify a velvet ant.

Red velvet ants are pretty large, with bodies that measure up to half an inch. Their bodies are dark brown or black, and they have bright orange thoraxes and abdomens.

Female red velvet ants look slightly different from males, as they have ant-like bodies with stingers at the end. You can often distinguish a female velvet ant by the thick layer of hair that covers its entire body and its hard outer shell. It also has six muscular legs to move quickly over surfaces. As for the males, they have four transparent dark wings on their backs.

Velvet ants like living in sunny areas such as gardens, lawns, yards, and forests. However, they might enter buildings and houses occasionally, but only when the weather outside is rainy. Since they don’t build colonies as true ants do, you won’t see a sign of their presence. Instead, you’ll see their females and males crawling over your grass.

As for their behavior, those ants are pretty solitary, unlike paper wasps and yellow jackets. Also, some velvet ant species are nocturnal, so your chance of seeing them is slim.

In general, female velvet ants are aggressive, so you shouldn’t disturb them. When they prepare to sting, they often make squeaky sounds as they scrap their abdomen segments against each other. On the other hand, male red velvet ants are calmer. They use their wings to fly over grasses and plants while looking for mating partners.

Velvet ants feed on nectar and water like most ground-nesting bees and wasps. However, immature velvet ants often feed on larvae, beetles, flies, bees, and other wasps.

Velvet ants are meant to be looked at but never touched. Believe us; you don’t want to experience their very painful sting. The intense pain might stay for half an hour, and it feels like a mild electric shock.

When a red velvet ant senses danger, it immediately goes into action and uses its stinger. Those stings hurt too much because velvet ants release a mild venom that reflects a huge pain on humans and animals. That’s why they’re commonly called cow killer ants. But it’s worth mentioning that the name is hypothetical because their sting would never kill a cow or any other animal.

Although rare, some people may be allergic to this venom. So if you notice any allergy symptoms, you should immediately seek medical help. On the Schmidt Pain Index, a red velvet ant sting has a score of three.

You should also know that only a female cow ant can bite you. Male red velvet ants don’t even have stingers.

If you’ve seen a red velvet ant before, then you probably know how bright-colored it is. Those colors aren’t only aesthetically pleasing; they also have scientific importance. Velvet ants use those colors as aposematic signals; to elaborate, they use them as a warning to repel predators.

This warning benefits both the red velvet ant and its attacker, as the ant won’t get eaten while the attacker won’t go through a fatal fight.

The reproduction process is quite simple in this species. First, the male velvet ants fly over plants to find females for mating. Since females are covered with detectable pheromones, males find them pretty quickly.

After mating, female velvet ants forcibly enter foreign nests, such as wasps and bumblebee nests. They might also invade a ground-nesting bee nest.

They do that to lay eggs there. Those eggs hatch shortly after into tiny legless grubs. Then, after two or three weeks, they feed on the hosts’ larvae and go through many larval stages before becoming pupae.

Interestingly enough, red velvet ants can hide their identities by releasing chemical markers; therefore, tricking host insects. That way, the hosts never know that they have cow killer ants inside their nest.

How To Prevent A Red Velvet Ant Invasion

Red velvet ants rarely move in large numbers because they’re solitary insects. They also don’t get attracted to houses and buildings as true ants do. As a result, you shouldn’t worry about red velvet ants invading your place.

If you spot a red velvet ant in your house for some reason, you should look for entry points. It mainly enters homes through wall cracks and crevices. Also, it might come through a gap in your house’s foundation walls. If you find a crack, you should fix it to avoid insects infesting your place.

Velvet ant species also get attracted to garbage, so it’d be best if you throw your trash out regularly. It’s crucial that you keep your place clean and neat. Another possible entry route is through tree branches in contact with your windows or roof. So, to be safe, you should cut those short.

If you find those cow killers in your place, you should consider contacting a pest control professional. This is mainly because they’re aggressive with an extremely painful sting, so dealing with them might not breed the best results.

How To Get Rid Of A Red Velvet Ant

We’ll tell you what to do in case you spot a red velvet ant in your place. Although true ants enter your house in large numbers, they’re mostly harmless and don’t sting. But, on the other hand, when dealing with those wasps, you should take care to avoid getting stung.

That said, you can spray insecticide on the red velvet ant you see, but make sure to purchase one suitable for wasps. Alternatively, you can step on it with your shoes, but never do that while you’re barefoot.

Although pretty rare, you might see a large group of adult velvet ants together. If that happens, you should track them to locate the hole they’re living in and spray it with a suitable pesticide. If you fail to find it, contact a pest control professional.

Can A Red Velvet Ant Kill A Dog?

No, red velvet ants only reflect pain on dogs, but they can’t kill them. However, because dogs don’t know how to handle the pain as we do, it might be a distressing experience for them.

Also, some dogs might be allergic to their venom, but this is extremely rare.

Do Velvet Ants Live In The United States?

The velvet ant’s origin is the eastern United States, so it mostly lives there. That’s why many people call it the eastern velvet ant. That said, those wasps are also prevalent in Mexico and southern Canada. You have a higher chance of seeing them during summer.

Why Are Cow Ants Hard To Kill?

Cow ants are hard to kill because they have many defense mechanisms against predators. They have warning chemical signals, an aposematic coloration, a tough exoskeleton that insects can’t bite into, and painful stings. That’s why many researchers call cow ants an invincible species.

There’s a common misunderstanding among people that velvet ants are actual ants. But interestingly, they’re a wasp species. They’re only called that way because their females don’t have wings and look strikingly like hairy ants. Luckily, you don’t have to worry about an infestation because of their solitary nature. But still, you should avoid dealing with them because they’re a pretty aggressive species.