Home » Ants » Types of Ants-Complete Guide On  The Different Species 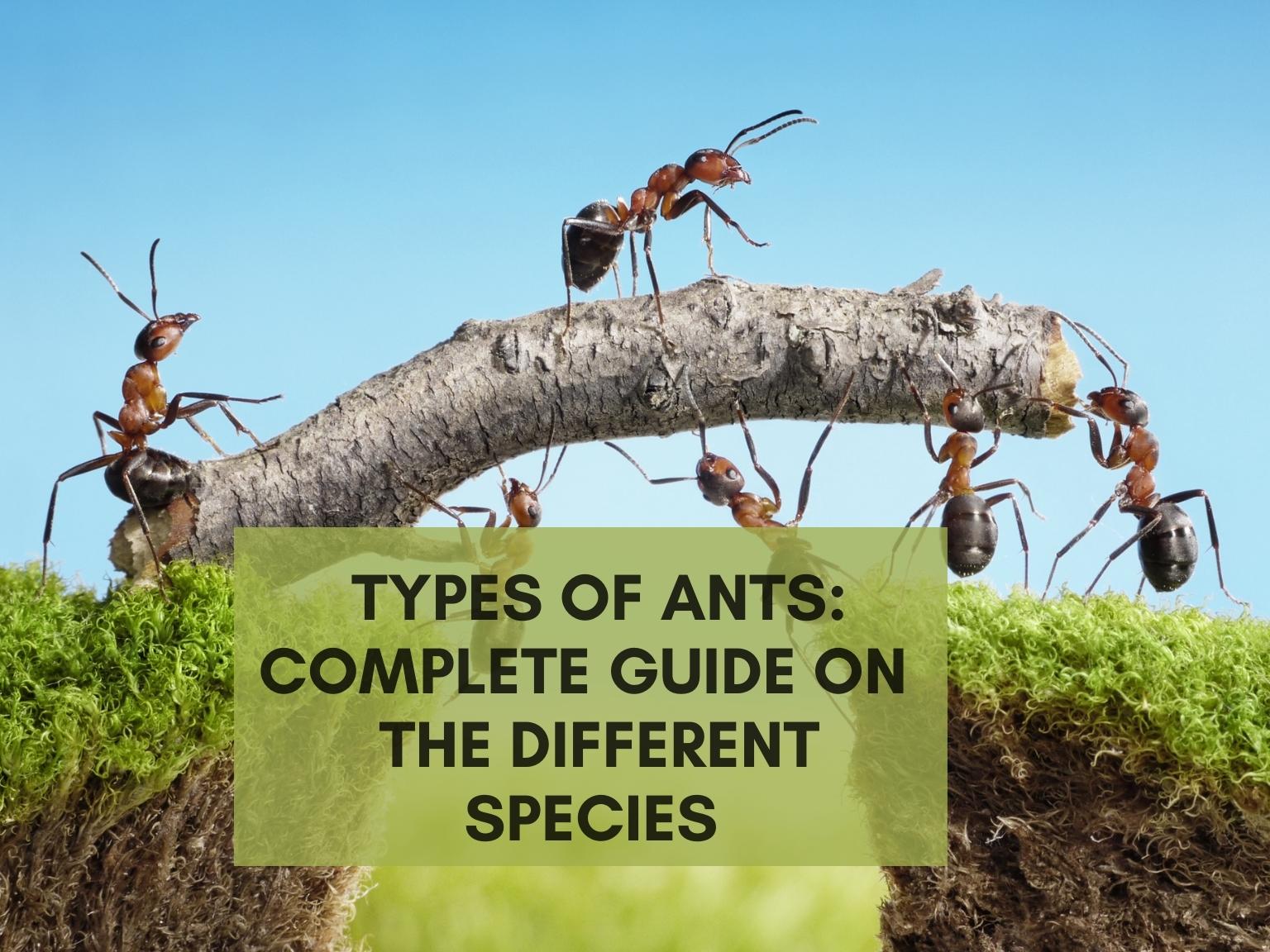 Ants are fascinating creatures that have a much more significant effect on the world than we know. To get all the information you need about the different types of ants, read on!

Pharaoh ants have small bodies with yellow thoraxes and dark backsides. You can usually find a pharaoh ant infestation at places where food is widely available, for example, restaurants, hospitals, grocery stores, and houses.

That said, they’re a nuisance to deal with because they can carry infectious diseases like salmonella. Moreover, eliminating them requires professional ant control.

ِAs the name implies, field ants like living outdoors. That’s why you’ll often find them moving around lawns and gardens, not inside houses. In terms of appearance, they have yellowish black bodies that are about 1/4 an inch in length.

However, don’t let their innocent appearance trick you because they are tough stingers. In addition, they can spray formic acid, thus, inducing pain on their bitten victim.

Carpenter ants are known for their enormous bodies and reddish-brown colors. However, they take second place when it comes to destruction and aggressiveness, with termites monopolizing the first. This is mainly because they eat wood and chew inside it to make comfortable nests.

It’d be best if you looked for signs of infestation to avoid damaged wood around your house. For example, if you notice wood shavings anywhere in the house, contact a professional right away.

You have the highest chance of seeing little black ants in summer, specifically from June to August. In general, they like to live under rocks, behind walls, and along sidewalks. They usually move around in trails to forage.

Those ants feed on meats, vegetables, fruits, grease, and more. They can sting, but luckily, their sting is so weak that you probably wouldn’t feel it.

If you spot an ant raising its entire body over its head like a scorpion, you should immediately identify it as an acrobat ant. Those acrobat ants are often black and brown with small bodies. Interestingly, they can live in high altitudes comfortably.

Their habitat is mainly moist woods and wooden structures. As for stinging, they’re pretty aggressive, so they’ll happily do so if someone disturbs them.

You might think that their name indicates their body colors; however, citronella ants are called that way because they have the ability to emit a lemony odor when something threatens them.

While they don’t usually infest houses, they get attracted to moisture. As a result, they might live in damp wood or any moist wooden structures around your property.

While velvet ants belong to the wasps family, they’re commonly called that way because of how much they look like ants. They have large hairy bodies, hence the name, with a slight constriction between their abdomens and thoraxes. Generally, you’ll be more likely to see those insects in lawns and gardens.

A “sugar ant” is a term that refers to any ant that feeds on sweet foods. However, people tend to mistake it with the real banded sugar ant, which lives exclusively in Australia. As a result, you running into one throughout the United States isn’t possible.

Leaf-cutting ants, also commonly called leafcutters, have light brown bodies with very long legs. Their colonies often have one queen, unlike many other types. As for workers, there can be millions of them in each colony. So naturally, those ants eat plants using their jaws.

Luckily, leafcutters rarely infest houses, but they can live in your garden and feed on your leaves. If you plan on handling them, you should be aware that they bite with their strong mandibles.

Ghost ants have pale skeletons that you would miss if you didn’t focus enough. They’re often 1/16 inch in length with uneven thoraxes. While they can infest and build nests inside houses, you don’t have to worry because they don’t have stingers, so they don’t bite.

Generally, ghost ants live in tropical regions, for example, Hawaii, and feed on fungi. So to keep those insects out of your house, you shouldn’t store any firewood near your place.

Harvester ants are known for their gorgeous appearances. Reddish-orange colors adorn their bodies, ranging up to half an inch in length. To distinguish them from other types, you should look at their chins, as they have long hairs that other species don’t.

Unfortunately, harvest ants have painful stings that can kill animals. Accordingly, if you plan on dealing with them, you must call a professional pest service.

Tawny crazy ants, also known as raspberry crazy ants, have reddish-brown bodies that range up to 1/8 inch in length. They often form their colonies under rocks, debris piles, timbers, and other landscape objects.

Those ants don’t have stingers. Instead, the worker ants have pores on their abdomens to excrete chemicals as a defense mechanism.

Argentine ants have short, shiny, and brown bodies with uneven thoraxes. This is among the few ant species that don’t have wings and have long segmented antennae. Generally, Argentine ant colonies are often crowded with multiple queens in charge.

Since Argentine ants can infest houses, you should make sure you keep your place adequately cleaned and sanitized. If you spot an infestation, you should contact a pest professional.

Unlike other ant species, this type is relatively easy to identify because it has light-colored feet, hence the name. Those ants only feed on honeydew nectar that aphids excrete. As a result, they’ll rarely get tricked by any ant baits you put out for them.

While those ants mostly nest outdoors under tree barks and woodpiles, they might enter your house and build a nest in your wall. Accordingly, you should get an inspection every once in a while to ensure your property is safe.

Pavements ants are known for being one of the most famous house invaders. They have dark brown, 1/8 inch in length bodies. Like many other ant species, pavement ants prefer sweet foods to any other types.

They’re named that way because they love building nests in pavements cracks. Moreover, although they have the ability to sting humans, they rarely do.

Pyramid ants can be easily distinguished by the triangular projection found on their dark reddish-brown thoraxes. Moreover, you can identify them by their uniquely shaped mounds, which often resemble volcanoes. Those mounds indicate very clearly that you have an infestation in your house. Luckily, pyramid ants rarely use their stingers to bite.

Cornfields commonly live outdoors, so that you might have come across them before. They often build their ant nests under rocks, pavements, and rocks. Moreover, they love moisture; accordingly, they may infest decaying and damaged wood.

As for appearance, a cornfield ant has a 1/10 inch long body that is light brown in color. Luckily, it rarely enters houses except to look for moisture and food. Accordingly, you shouldn’t worry about an infestation.

Also known as Allegheny mound ants, those insects have dark brown abdomens, reddish heads, and thoraxes. They don’t have stingers; however, they might bite you if you disturb their mound. Another defensive mechanism they have against disturbances is emitting a unique formic acid smell.

Generally, those ants feed on honeydew produced by aphids, and in exchange, they protect the aphids from danger.

Those tiny ants can sneak undetected into your house and steal your food. That said, the main reason they’re called that is that they raid other ants’ nests to steal their larvae and eggs. Unfortunately, you might mistake them for Pharoah ants once you see them since they have similar colors and body sizes.

To eliminate those thieves from your house, you should use sweet baits, for example, peanut butter or cornmeal.

Fire ants are among the most aggressive ant species in the world. They’re known for their awfully painful sting that can cause an allergic reaction. However, their bite is rarely fatal. Resembling fire, those ants have crimson bodies. During floods, they famously cling to each other and form a raft. Moreover, they become increasingly aggressive and hungry.

If you bump into any fire ant, you should immediately contact pest control because they’re bad news. Not to mention, they feed on nearly anything in front of them.

“Picnic ants” is a term that refers to a group of ants that famously attack people peacefully munching on food during picnics. The most common types are carpenter, fire, and little black ants. Since ants are primarily attracted to sweet foods, you should avoid placing any of those on the ground or spilling sweet drinks.

Known for their fascinating madness, crazy ants usually frantically move in zigzag patterns. Interestingly enough, they have a weird attraction to electrical equipment. Moreover, those ants are social insects that typically work together to transport food in methods that single ants can’t handle.

Surprisingly, crazy ants are much more intelligent than many different ant species. So don’t let their freaky movements trick you into thinking they don’t know what they’re doing.

Aptly named, odorous house ants can emit awful smells if you step on them or disturb them. They have shiny, black bodies that can reach 1/8 inch in length. Since they get attracted to sweet foods, you might find them commonly in your house. To eliminate them, you’ll need to set up some ant baits.

Luckily, odorous ants don’t sting or bite, and they’re nomadic, so they don’t stay in one place for long. As a result, an odorous ant colony can reach up to 50,000 members.

In terms of appearance, big-headed ants look much like subterranean termites; that’s why they’re frequently confused. However, those ants mostly nest in the soil in tropical regions of the United States.

Interestingly, their colonies have two worker classes instead of one, minor and major. Minor worker ants are tiny and mainly forage for food. Meanwhile, major workers are large with strong mandibles that they use to crack seeds.

As horrifying as it sounds, kidnapper ants are known for stealing babies from other ants. They use a unique brainwashing method that convinces the young ants they’re back home after taking them to their nest. Kidnapper ants mostly live in mountainous areas and forests where they constantly look for other species’ nests.

Regarding appearance, kidnapper ants have reddish-orange heads and thoraxes along with dark black abdomens.

Asian needle ants have brownish-black bodies with orange jaws. They like nesting outdoors in areas where shade and moisture are available. Asian needle ants are naturally less aggressive than many types of ants.

An Asian needle ant will only sting if it becomes trapped between your clothes and skin. Unfortunately, it has a painful sting that can result in welts sometimes. In rare cases, it can cause an anaphylactic shock.

Dark rover ants are tiny insects that have only one node on their dark brown bodies. Since they mostly feed on sweet drinks, they can be commonly found in places crowded with people. For example, you can find them in your kitchen or bathroom. They form vast colonies, but luckily, they can’t sting humans.

Ant types have remarkable diversity. There are aggressive ants, calm ants, sneaky ants, and more. Moreover, they differ in their appearances, even if slightly. To be able to identify different types of ants, you should learn about their behaviors and appearances and call a pest control company if you suspect an infestation at your home.